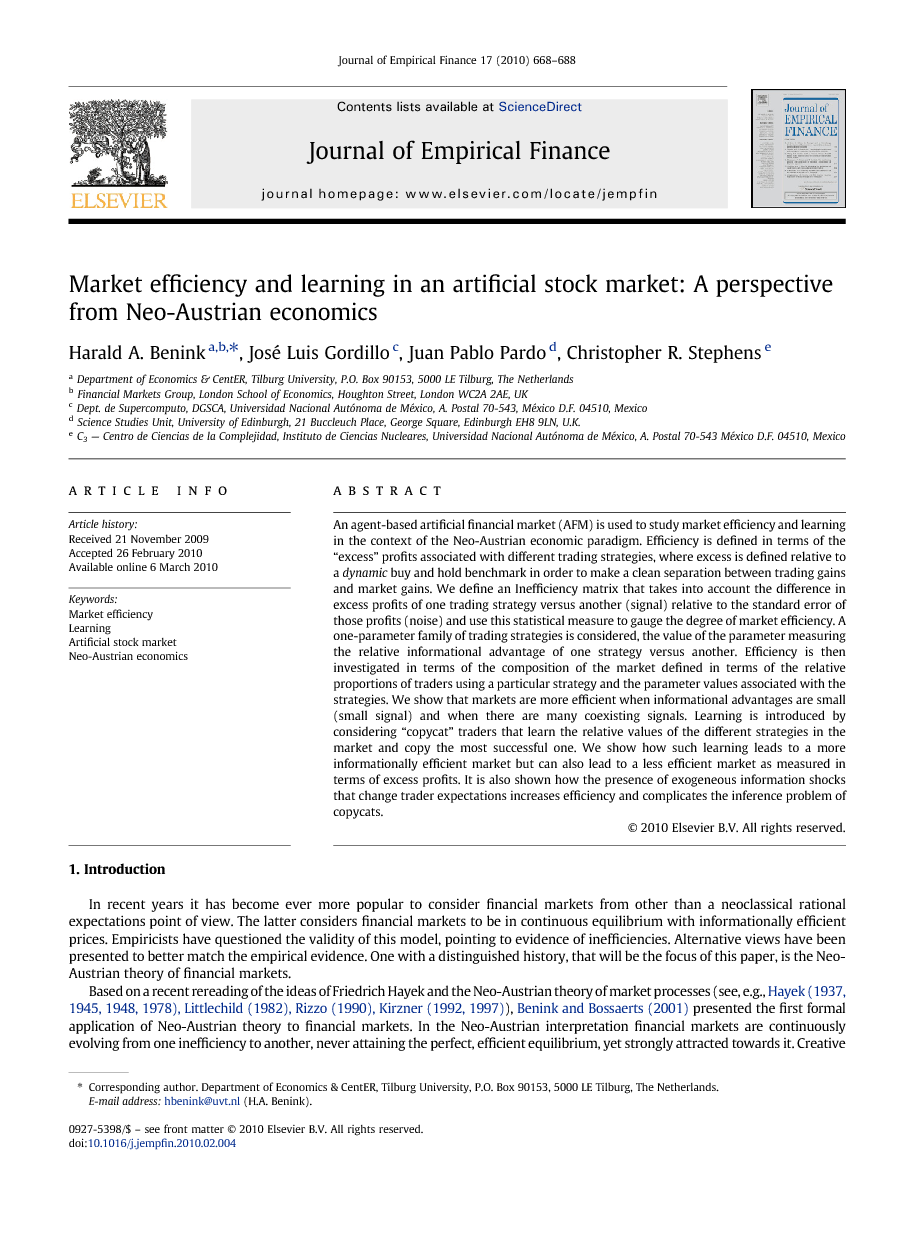 An agent-based artificial financial market (AFM) is used to study market efficiency and learning in the context of the Neo-Austrian economic paradigm. Efficiency is defined in terms of the “excess” profits associated with different trading strategies, where excess is defined relative to a dynamic buy and hold benchmark in order to make a clean separation between trading gains and market gains. We define an Inefficiency matrix that takes into account the difference in excess profits of one trading strategy versus another (signal) relative to the standard error of those profits (noise) and use this statistical measure to gauge the degree of market efficiency. A one-parameter family of trading strategies is considered, the value of the parameter measuring the relative informational advantage of one strategy versus another. Efficiency is then investigated in terms of the composition of the market defined in terms of the relative proportions of traders using a particular strategy and the parameter values associated with the strategies. We show that markets are more efficient when informational advantages are small (small signal) and when there are many coexisting signals. Learning is introduced by considering “copycat” traders that learn the relative values of the different strategies in the market and copy the most successful one. We show how such learning leads to a more informationally efficient market but can also lead to a less efficient market as measured in terms of excess profits. It is also shown how the presence of exogeneous information shocks that change trader expectations increases efficiency and complicates the inference problem of copycats.

The main goal of this paper was to study Neo-Austrian ideas about market efficiency and learning, usually expressed in qualitative language, in the formal setting of an agent-based AFM market — the NNCP. Unlike a real market, the luxury of an AFM is that we can create an efficient or inefficient market and then vary the parameters of the market in order to study when, and under what conditions, it is possible to infer efficiency from observing the market. To avoid the joint-hypothesis problem we used a purely empirical quantitative measure of efficiency, defining an inefficient market in terms of whether or not there exist traders making systematic, excess profits. To distinguish between trading gains and market gains excess was defined relative to a dynamic buy and hold benchmark. As excess profit is a stochastic variable it is most naturally measured in units of the standard deviation of the excess profits. In this way one can not only distinguish between traders profiting from an active trading strategy as opposed to those profiting purely from market gains, but one can also distinguish between those traders who have a “lucky” trading strategy versus an “intelligent” one. We used the concept of an Inefficiency Matrix which summarizes the relative inefficiencies between the different trading strategies in the market. Using the Inefficiency Matrix as the principle measure, we performed a series of simulations in the context of a transparent model where the traders used trading strategies taken from a one-parameter family associated with a trading “bias”, zero bias corresponding to noise or liquidity traders. Learning was introduced using the concept of a copycat trader who observes the market, statistically estimates which is the most successful strategy and then copies it. It is important to emphasize that all these elements have been used in previous studies, in Gordillo and Stephens, 2001a and Gordillo and Stephens, 2001b, without any reference to the Neo-Austrian paradigm. In other words, our model was not designed with the Neo-Austrian viewpoint in mind. Rather, our motivation was to use a previously designed model to see to what extent its results were most naturally interpreted in the Neo-Austrian as opposed to the neoclassical framework. Two important observations gleaned from these simulations are: Firstly, that market inefficiency, as we have defined it, perforce requires the presence of heterogeneity, i.e. distinct trading strategies. Markets where all participants utilise the same trading strategy are incapable of exhibiting inefficiencies. Secondly, that efficient learning in the context of the copycat paradigm requires that the different trading strategies be readily distinguishable in terms of their relative performance, as, otherwise, agents can easily make mistakes in the learning process as to what is the optimal strategy to follow. Allied to this is the fact that the learning process itself can naturally lead to a greater convergence of trading strategies, as copycats switch to the more successful ones. This negative feedback process is, in fact, the market becoming more efficient. The results of this paper are in general consistent with the Neo-Austrian interpretation of markets as opposed to the neoclassical rational expectations point of view that considers financial markets to be in continuous equilibrium with informationally efficient prices. The results, in fact, lend substantial insight into and enrich many of the key elements of Neo-Austrian theory which, as mentioned, is a predominantly qualitative theory. For instance, we saw that the existence of alert entrepreneurs (copycats) could even lead to an increase in inefficiency rather than a decrease, depending on the proportion of informed to uninformed agents in the market. Interestingly, and contrary to other alternative theories explaining inefficient financial markets, in the Neo-Austrian view the failure of markets to reach the informationally efficient equilibrium ought not to be attributed to costs of any nature (adjustment costs, information costs, trading costs, etc). This description fits very well the results of the simulations of Section 4.4, where “creative investors” (informed traders and copycats) track and exploit profit opportunities generated by exogeneous information shocks. With their emphasis on imperfect knowledge the Neo-Austrians put themselves at the heart of the famous debate on risk and uncertainty (see, e.g., Knight (1921)). Neoclassical financial economists believe that uncertainty can be reduced to “objective” risk, depending on knowledge of the objective probability distribution implied by the true model of the economy that economic agents know or are capable of learning. However, Neo-Austrians tend to emphasize that economic agents have to cope with imperfect knowledge and fundamental uncertainty. Just as post-Keynesian economists, they claim that neoclassical theory fails to specify how agents will be able to overcome fully this uncertainty, i.e. that it can be reduced to the “objective” probability distribution implying rational expectations and efficient markets. Contrary to post-Keynesians, however, Neo-Austrians claim that alert market participants have powerful incentives to learn about the true nature of uncertainty and related disequilibrium, because disequilibrium generates profit opportunities. Thus, the market process is viewed as a stabilizing process with a powerful tendency towards equilibrium and efficiency. With their trust in the market process Neo-Austrian economists are intellectually close to their neoclassical colleagues, although they arrive at this result from a rather different perspective on the underlying economic reality. We believe that our results on learning and inference for copycat entrepreneurs perfectly illustrate this point of view. Due to their flexibility and adjustable complexity, we believe that AFMs are an ideal vehicle for addressing some of the deepest and most difficult questions about efficiency and rational expectations. Further, by using a purely empirical measure of inefficiency, as we have done here, complications due to the joint-hypothesis problem can be avoided. We believe that combining the two gives a powerful framework within which other fruitful studies may be carried out.