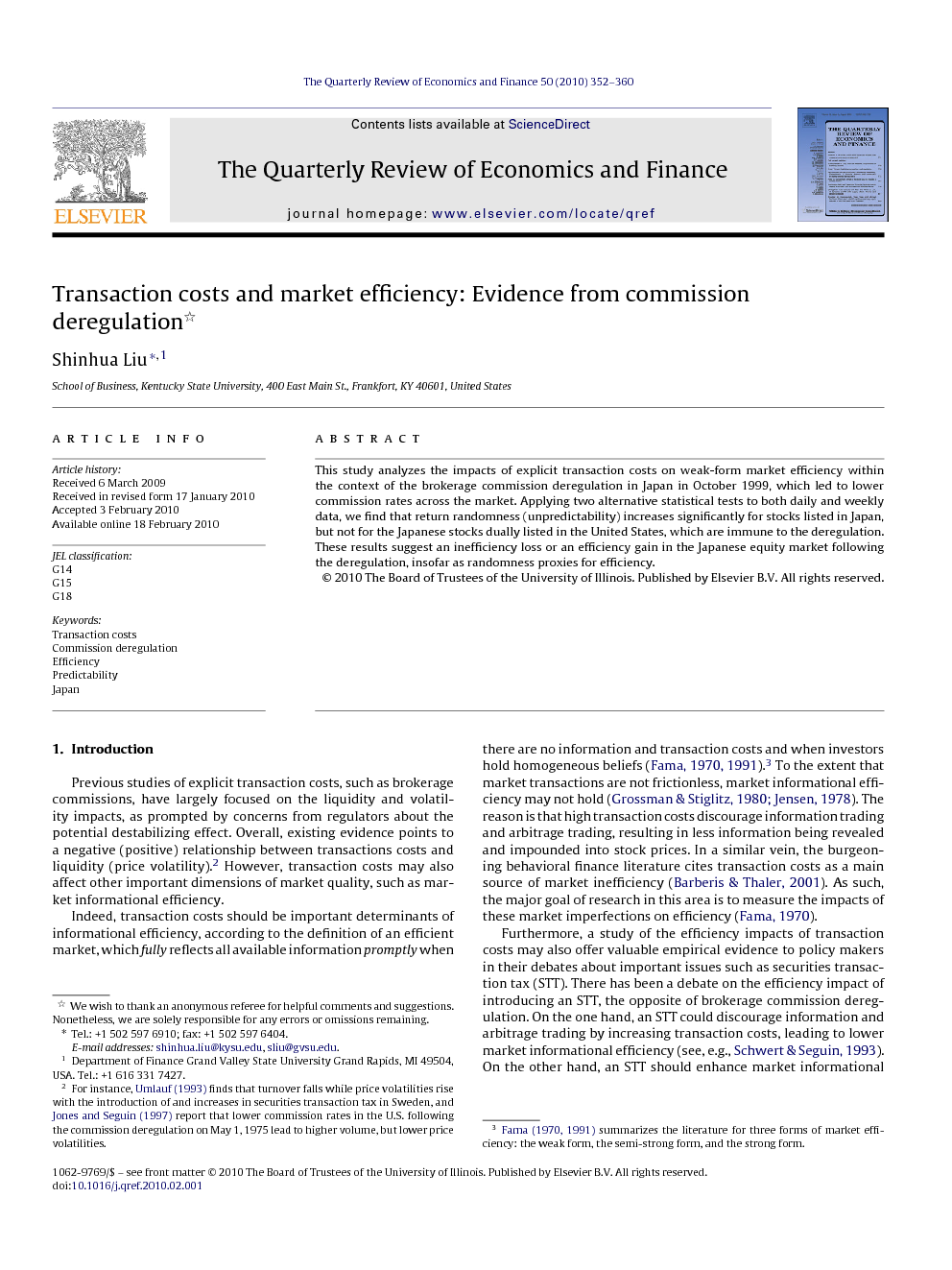 This study analyzes the impacts of explicit transaction costs on weak-form market efficiency within the context of the brokerage commission deregulation in Japan in October 1999, which led to lower commission rates across the market. Applying two alternative statistical tests to both daily and weekly data, we find that return randomness (unpredictability) increases significantly for stocks listed in Japan, but not for the Japanese stocks dually listed in the United States, which are immune to the deregulation. These results suggest an inefficiency loss or an efficiency gain in the Japanese equity market following the deregulation, insofar as randomness proxies for efficiency.

Brokerage commission rates were fully deregulated in Japan on October 1, 1999. As expected, commission rates fell across the board following the deregulation. With lower transaction costs, stock trading should be more active and, thus, more information should be impounded into stock prices at an enhanced rate, leading to higher informational efficiency in the equity market. We examine the efficiency effects of the commission deregulation in Japan in this study using two alternative methods, and document the following major findings. Applying two alternative empirical methods to both daily and weekly data, we find that, following the commission deregulation, equity return in Japan becomes significantly more random and, thus, less predicable. In the concurrent period, however, no such change occurs to a control portfolio of Japanese ADRs, whose returns should be subject to the same economics forces in Japan but the commission deregulation. Insofar as randomness proxies for market informational efficiency, as assumed conventionally in the literature, these findings suggest that the commission deregulation has enhanced the efficiency in the Japanese equity market. Moreover, these results suggest that any policy that helps to reduce transaction costs should improve market efficiency, lending another clinical data point to the debate on the efficiency effect of exogenous transaction costs. Given the theoretical importance of the efficiency issue in the finance literature, as demonstrated in the surveys by Fama, 1970 and Fama, 1991 and Barberis and Thaler (2001), and its implications for important public polices (such as brokerage commissions, margin requirements, and transaction taxes), further explorations of different types of transaction costs in different institutional settings should be worthwhile.