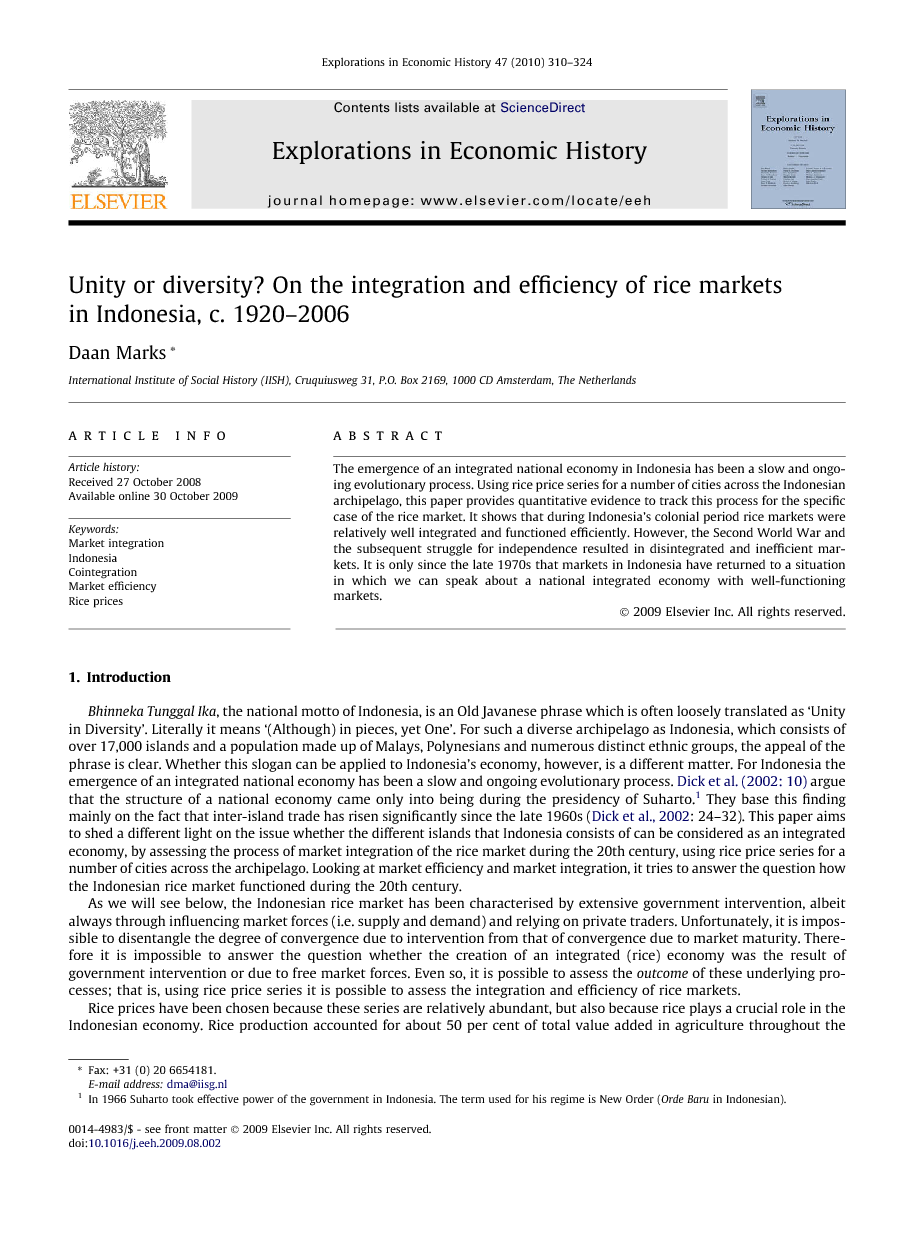 The emergence of an integrated national economy in Indonesia has been a slow and ongoing evolutionary process. Using rice price series for a number of cities across the Indonesian archipelago, this paper provides quantitative evidence to track this process for the specific case of the rice market. It shows that during Indonesia’s colonial period rice markets were relatively well integrated and functioned efficiently. However, the Second World War and the subsequent struggle for independence resulted in disintegrated and inefficient markets. It is only since the late 1970s that markets in Indonesia have returned to a situation in which we can speak about a national integrated economy with well-functioning markets.

Bhinneka Tunggal Ika, the national motto of Indonesia, is an Old Javanese phrase which is often loosely translated as ‘Unity in Diversity’. Literally it means ‘(Although) in pieces, yet One’. For such a diverse archipelago as Indonesia, which consists of over 17,000 islands and a population made up of Malays, Polynesians and numerous distinct ethnic groups, the appeal of the phrase is clear. Whether this slogan can be applied to Indonesia’s economy, however, is a different matter. For Indonesia the emergence of an integrated national economy has been a slow and ongoing evolutionary process. Dick et al. (2002: 10) argue that the structure of a national economy came only into being during the presidency of Suharto. 1 They base this finding mainly on the fact that inter-island trade has risen significantly since the late 1960s ( Dick et al., 2002: 24–32). This paper aims to shed a different light on the issue whether the different islands that Indonesia consists of can be considered as an integrated economy, by assessing the process of market integration of the rice market during the 20th century, using rice price series for a number of cities across the archipelago. Looking at market efficiency and market integration, it tries to answer the question how the Indonesian rice market functioned during the 20th century. As we will see below, the Indonesian rice market has been characterised by extensive government intervention, albeit always through influencing market forces (i.e. supply and demand) and relying on private traders. Unfortunately, it is impossible to disentangle the degree of convergence due to intervention from that of convergence due to market maturity. Therefore it is impossible to answer the question whether the creation of an integrated (rice) economy was the result of government intervention or due to free market forces. Even so, it is possible to assess the outcome of these underlying processes; that is, using rice price series it is possible to assess the integration and efficiency of rice markets. Rice prices have been chosen because these series are relatively abundant, but also because rice plays a crucial role in the Indonesian economy. Rice production accounted for about 50 per cent of total value added in agriculture throughout the 20th century (Van der Eng, 1996, Table A1). And despite the fact that agriculture as a percentage of total GDP has been declining steadily, especially since the 1970s, almost 10 per cent of GDP is still earned in rice production nowadays. But it is not only as a source of income that rice plays a significant role in the Indonesian economy. On the consumption side rice is also the most important product. In 2001 on average 14 per cent of a family’s budget was spent on rice, but the figure ranged from close to 30 per cent for the poor to only 2.5 per cent for the very rich (BPS, 2001). Since Engel’s Law seems to hold for rice consumption, in earlier stages of development rice was probably an even more important expenditure item than it is nowadays. Considering the importance of rice in the Indonesian economy, it can be argued that a well-functioning rice market is a precondition for economic development. This is in line with the neo-institutional approach developed by Douglass North, 1981 and North, 1990. According to this school of economists, well-protected property rights and low transaction costs are necessary for efficient markets, which in turn make processes of commercialisation and specialisation possible. Van Zanden (2004) provided evidence for this, showing that institutional failures resulted in extreme fluctuations in rice prices in Java during the first half of the 19th century. In combination with poor integration of the rice market this meant that peasants had weak incentives to increase market production. This is arguably one of the reasons behind the slow economic development of Java during the 19th century. Twentieth-century Indonesia forms an excellent laboratory to further analyse the relation between efficient markets, market integration and economic growth. Data on rice prices are relatively abundant. Moreover economic development in Indonesia during the 20th century can safely be characterised as erratic. Periods of growth were followed by recessions and vice versa. Taking a long-term perspective enables us to draw conclusions about the role that efficient markets have played in the economic development of Indonesia. Studies empirically testing market efficiency and market integration in Indonesia are scarce. Several descriptive studies evaluating rice market performance are available (Timmer, 1974, World Bank, 1987, Food and Agriculture Organization, 1991, Pearson et al., 1991 and Tabor, 1992). Prior to the Green Revolution Mears (1961) conducted a study and concluded that rice markets in Indonesia did not function efficiently. Squires and Tabor (1987) econometrically tested for rice market integration in Java using Granger (1981) causality tests, and found the Javanese rice market to be integrated. Alexander and Wyeth (1994) introduced cointegration tests to study rice market integration in Indonesia between 1979 and 1990. They concluded that markets were integrated during this period. Ismet et al. (1998) tested for market integration for the period 1982–1993 and found that relative to the pre-self-sufficiency period (1982–1984), the post-self-sufficiency period (1985–1993) had a smaller degree of market integration. The aim of this paper is to add to the current debate in an important respect. Earlier studies cover only short periods, but this paper analyses the functioning of the rice market in Indonesia from a long-term perspective. Looking at both price stability and market integration under the different regimes (i.e. colonial administration, Soekarno, Suharto, and post-Suharto) should enhance our understanding of Indonesia’s long-term economic development. The remainder of the paper is organised as follows. Section 2 deals with the relation between stable food prices, market integration and economic development. In Section 3 inter-temporal price variations in Indonesia’s rice market are discussed. In Section 4 we shift attention to spatial market integration. Section 5 concludes.

The economic literature offers theoretical foundations as to why stable prices and market integration lead to economic growth. Using rice price series for different cities in Indonesia, this paper has shown how market efficiency and market integration emerged there across time and across space. It has been suggested that under the colonial administration markets were functioning relatively well. Rice price fluctuations were limited and evidence suggests that markets, at least on Java, were integrated. After independence increased uncertainty, a devastated infrastructure and lack of political power to tackle these problems affected both price stability and market integration. Not surprisingly this resulted in a stagnating economy. After Suharto came to power, economic policy became one of the priorities of the new government. The two oil booms during the 1970s provided the government with the means to position the economy on an unprecedented growth path. Large investments were made in infrastructure, and measures were taken to regulate rice prices. Especially after the establishment of Bulog in 1969 the government started to heavily regulate rice markets. This resulted in a high degree of price stability and increased market integration, which in turn translated into high growth rates. Since 1987 stabilisation of rice prices has been maintained, despite a small increase in fluctuations since the beginning of the 21st century, caused by the reforms put in place to limit the monopoly power of Bulog and give more room to market forces. This change has not yet been reflected in the market integration analysis. In this last period under study Indonesia’s rice market was clearly integrated. The speed of adjustment coefficients, however, were lower than before, signalling new inefficiencies in the rice market.