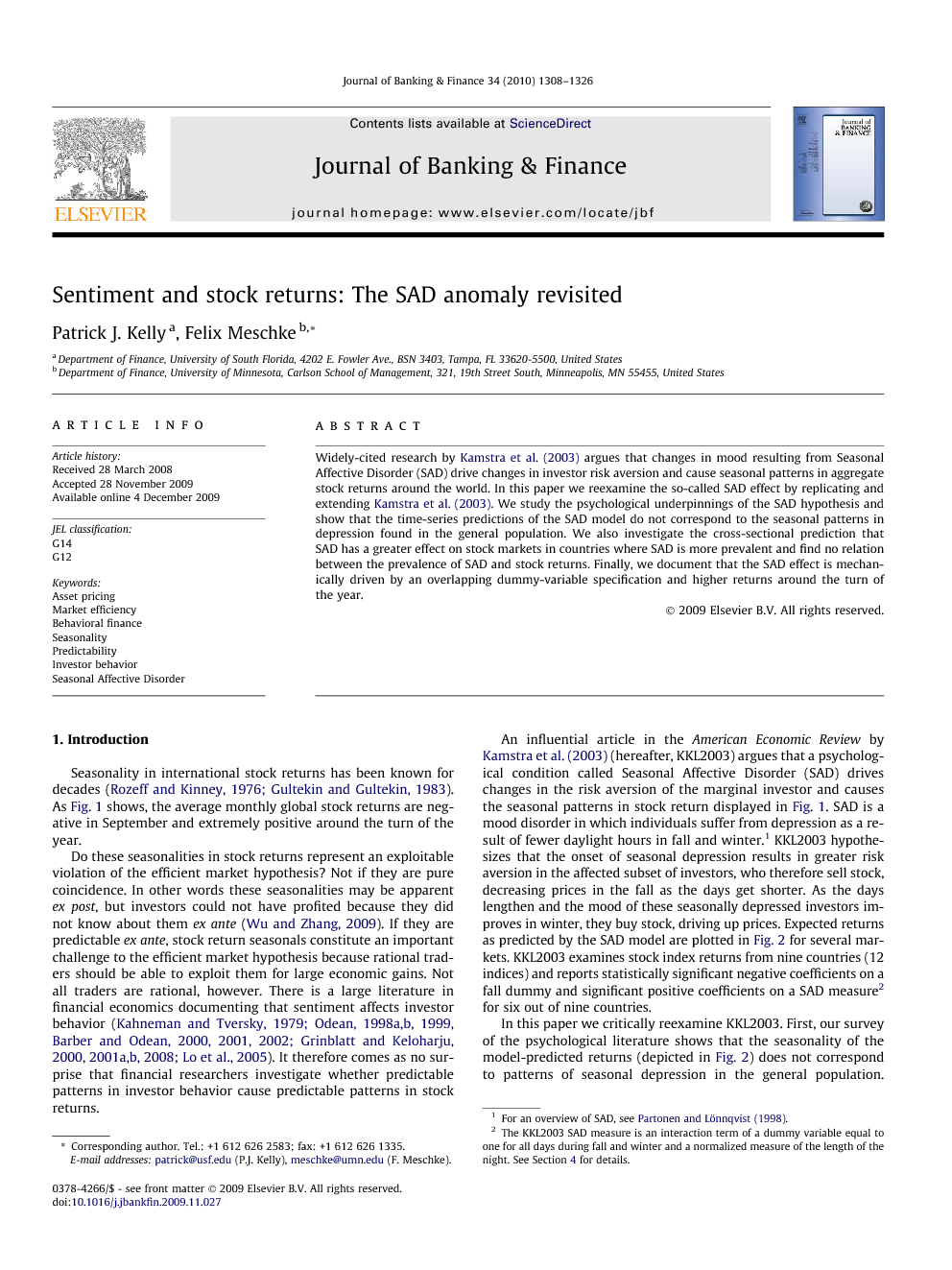 Widely-cited research by Kamstra et al. (2003) argues that changes in mood resulting from Seasonal Affective Disorder (SAD) drive changes in investor risk aversion and cause seasonal patterns in aggregate stock returns around the world. In this paper we reexamine the so-called SAD effect by replicating and extending Kamstra et al. (2003). We study the psychological underpinnings of the SAD hypothesis and show that the time-series predictions of the SAD model do not correspond to the seasonal patterns in depression found in the general population. We also investigate the cross-sectional prediction that SAD has a greater effect on stock markets in countries where SAD is more prevalent and find no relation between the prevalence of SAD and stock returns. Finally, we document that the SAD effect is mechanically driven by an overlapping dummy-variable specification and higher returns around the turn of the year.

Seasonality in international stock returns has been known for decades (Rozeff and Kinney, 1976 and Gultekin and Gultekin, 1983). As Fig. 1 shows, the average monthly global stock returns are negative in September and extremely positive around the turn of the year. Full-size image (20 K) Fig. 1. Average monthly return around the world. The figure above plots the equally weighted average monthly index return for all countries included in this study. For each country we select one index and calculate continuously compounded monthly returns from daily data (for the US we select the S&P 500, for the UK, the Datastream Total Market Index). Then we calculate the simple monthly average return across all 35 indices, excluding the US, in the given month. We only calculate average returns if all series are available. For this reason the series covers 1993 through 2008. Then we average across all years and the average is presented above. The US series is the average over 1948 through 2008. Figure options Do these seasonalities in stock returns represent an exploitable violation of the efficient market hypothesis? Not if they are pure coincidence. In other words these seasonalities may be apparent ex post, but investors could not have profited because they did not know about them ex ante ( Wu and Zhang, 2009). If they are predictable ex ante, stock return seasonals constitute an important challenge to the efficient market hypothesis because rational traders should be able to exploit them for large economic gains. Not all traders are rational, however. There is a large literature in financial economics documenting that sentiment affects investor behavior ( Kahneman and Tversky, 1979, Odean, 1998a, Odena, 1998b, Odean, 1999, Barber and Odean, 2000, Barber and Odean, 2001, Barber and Odean, 2002, Grinblatt and Keloharju, 2000, Grinblatt and Keloharju, 2001a, Grinblatt and Keloharju, 2001b, Grinblatt and Keloharju, 2008 and Lo et al., 2005). It therefore comes as no surprise that financial researchers investigate whether predictable patterns in investor behavior cause predictable patterns in stock returns. An influential article in the American Economic Review by Kamstra et al. (2003) (hereafter, KKL2003) argues that a psychological condition called Seasonal Affective Disorder (SAD) drives changes in the risk aversion of the marginal investor and causes the seasonal patterns in stock return displayed in Fig. 1. SAD is a mood disorder in which individuals suffer from depression as a result of fewer daylight hours in fall and winter. 1 KKL2003 hypothesizes that the onset of seasonal depression results in greater risk aversion in the affected subset of investors, who therefore sell stock, decreasing prices in the fall as the days get shorter. As the days lengthen and the mood of these seasonally depressed investors improves in winter, they buy stock, driving up prices. Expected returns as predicted by the SAD model are plotted in Fig. 2 for several markets. KKL2003 examines stock index returns from nine countries (12 indices) and reports statistically significant negative coefficients on a fall dummy and significant positive coefficients on a SAD measure 2 for six out of nine countries.

The SAD hypothesis states that seasonal patterns in clinical depression among SAD-afflicted investors cause seasonal variation in their risk aversion, which in turn causes seasonality in aggregate stock returns. This paper shows that the SAD hypothesis is unsupported by the psychological literature, that prevalence of SAD in the general population is not related to stock returns, and that the econometric specification of the SAD model mechanically induces the statistical significance cited as evidence for the SAD effect. While our econometric critique is specific to the proposed SAD effect, our review of the medical and psychological evidence has broader implications for behavioral studies in finance and economics. Our critical reexamination illustrates that an association between sentiment-affecting events and stock prices is not sufficient to credibly establish a causal link between the two. Many articles that study whether investor sentiment impacts stock returns focus on carefully identifying suitable events that have been shown to affect mood and are unlikely to affect the economic opportunities of individuals or corporations. Yet these studies tend to skip three important steps by not examining whether the event-induced mood change actually affects investor perception of financial risk or return, whether such a change in perception manifests itself in trading behavior, and whether these sentiment-based trades impact stock prices. It is essential to carefully scrutinize these links for one to conclude that sentiment affects security prices.