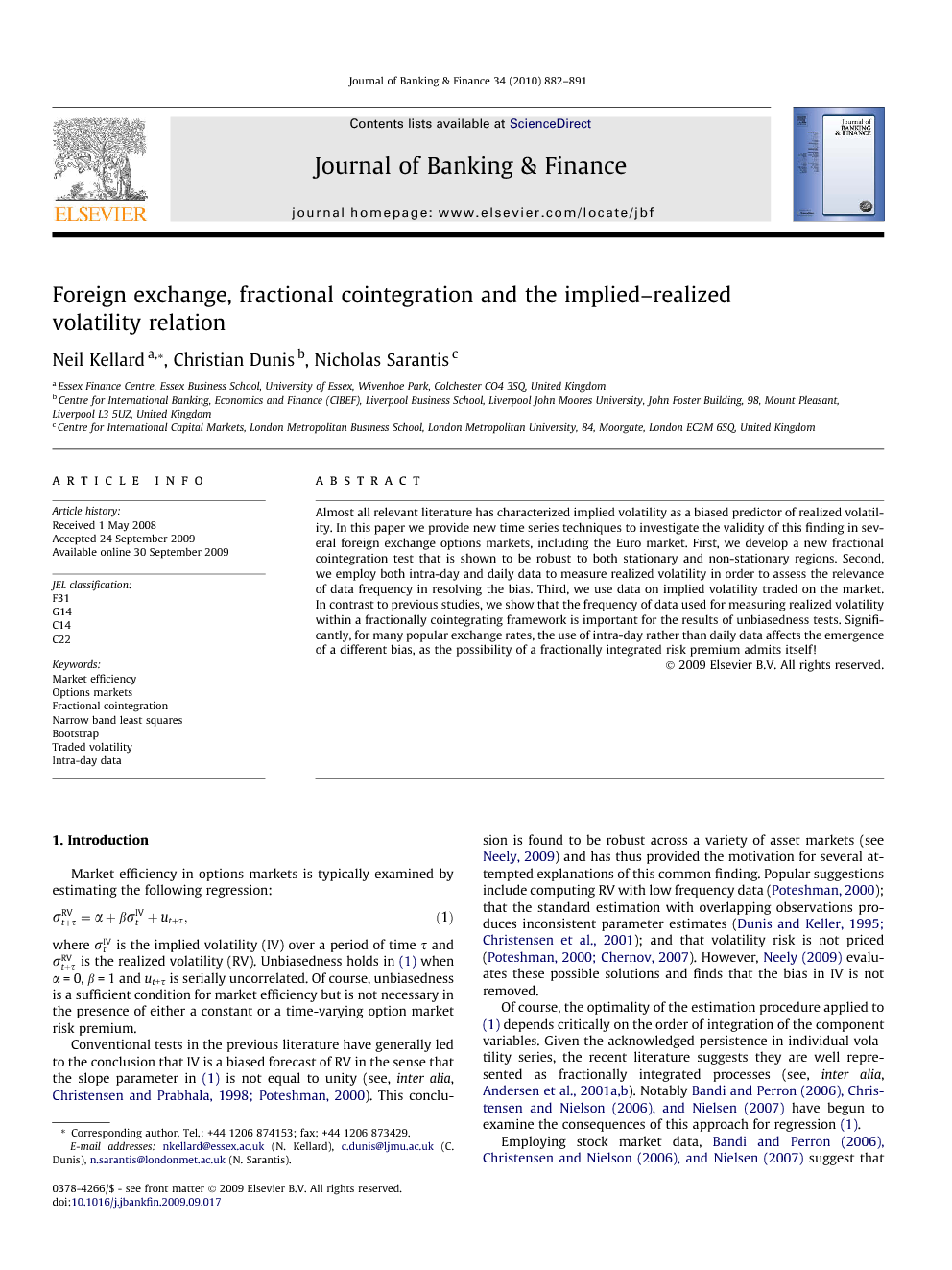 Almost all relevant literature has characterized implied volatility as a biased predictor of realized volatility. In this paper we provide new time series techniques to investigate the validity of this finding in several foreign exchange options markets, including the Euro market. First, we develop a new fractional cointegration test that is shown to be robust to both stationary and non-stationary regions. Second, we employ both intra-day and daily data to measure realized volatility in order to assess the relevance of data frequency in resolving the bias. Third, we use data on implied volatility traded on the market. In contrast to previous studies, we show that the frequency of data used for measuring realized volatility within a fractionally cointegrating framework is important for the results of unbiasedness tests. Significantly, for many popular exchange rates, the use of intra-day rather than daily data affects the emergence of a different bias, as the possibility of a fractionally integrated risk premium admits itself!

Almost all relevant literature has characterized implied volatility (IV) in the foreign exchange options markets as a biased predictor of realized volatility (RV). The cause of this bias has been the subject of much debate but in a recent paper, Neely (2009), the popular suggestions (i.e. overlapping data; use of low frequency data; and the non-pricing of volatility premia) are rejected. In this paper we examine the unbiasedness hypothesis by employing data for several very liquid foreign exchange options markets, including the relatively new Euro market. We make three contributions to the existing literature. Firstly, we develop, examine and apply a new test for fractional cointegration which is shown to be robust to both the stationary and non-stationary regions, including the weakly non-stationary region. Secondly, given that RV constructed from intra-day data is a less noisy proxy for the unobserved but true volatility, we posit that any (small) time-varying risk premia are more likely to be detected using the higher frequency data. To examine this issue, for each currency we construct two RV series from intra-day and daily data respectively and their respective relation with IV is compared throughout the empirical analysis. Thirdly, we collect data on IV that is traded on the market (and hence is directly observable). Since these data are directly quoted from brokers, they avoid the potential measurement errors associated with the more common approach of backing out implied volatilities from a specific option-pricing model. In contrast to previous studies, we find that the frequency of data used for the construction of RV is important for both the results of unbiasedness tests and the detection of time-varying risk premia in foreign exchange options markets. Employing the new fractional cointegration test, we show that foreign exchange RV and IV are fractionally cointegrated across a range of currencies and data frequencies. Moreover, tests using bootstrapped estimates and confidence intervals are not typically able to reject the hypothesis that the slope parameter in the RV–IV relation is unity. Contrary to the widely held view derived from previous research, the slope coefficient in the RV–IV relation is therefore shown not to be the primary source of bias. However, serial correlation tests of the forecast error in the RV–IV relation, which are frequently neglected in the extant literature, reveal a different picture. Results based on the RV measure derived from intra-day data show significant serial correlation in the forecast error for four out of six currencies, which suggests rejection of the unbiasedness hypothesis. In contrast, results obtained from the daily RV typically indicate absence of serial correlation in the forecast error and hence they support unbiasedness. It would appear that intra-day data reveal structures in the forecast error, while the more noisy and hence less reliable daily data veils this structure. Furthermore, when we employ the RV measure derived from intra-day data, the forecast errors for currencies like the Sterling/US$, Euro/Yen and US$/Swiss Franc, are shown to be fractionally integrated, suggesting the possibility of a time-varying risk premium with long memory. This is a new finding in the literature on options markets. This result is not found when the RV measure is derived from daily data and provides further testimony that the use of less noisy proxies for RV has significant time series implications.