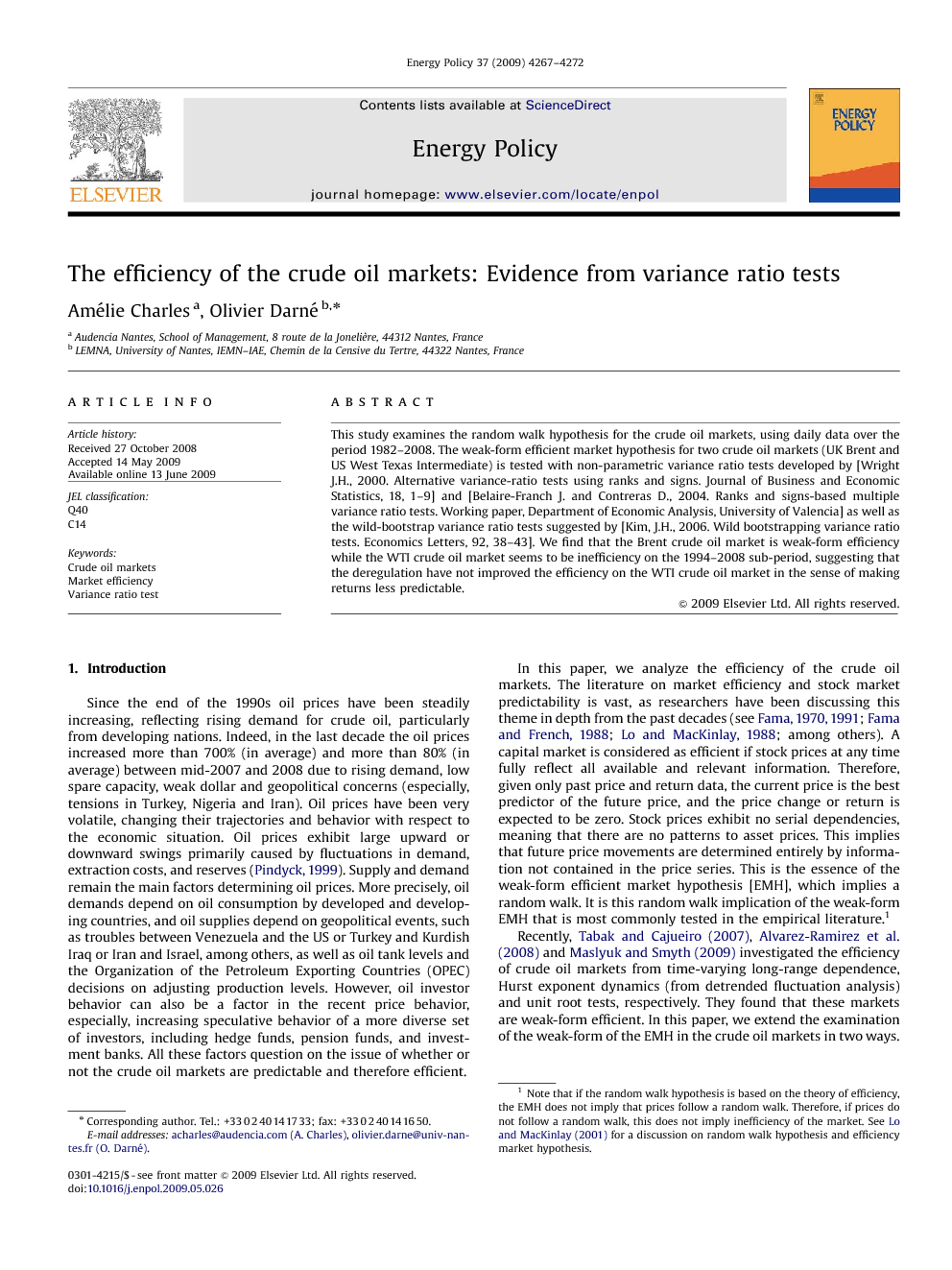 Since the end of the 1990s oil prices have been steadily increasing, reflecting rising demand for crude oil, particularly from developing nations. Indeed, in the last decade the oil prices increased more than 700% (in average) and more than 80% (in average) between mid-2007 and 2008 due to rising demand, low spare capacity, weak dollar and geopolitical concerns (especially, tensions in Turkey, Nigeria and Iran). Oil prices have been very volatile, changing their trajectories and behavior with respect to the economic situation. Oil prices exhibit large upward or downward swings primarily caused by fluctuations in demand, extraction costs, and reserves (Pindyck, 1999). Supply and demand remain the main factors determining oil prices. More precisely, oil demands depend on oil consumption by developed and developing countries, and oil supplies depend on geopolitical events, such as troubles between Venezuela and the US or Turkey and Kurdish Iraq or Iran and Israel, among others, as well as oil tank levels and the Organization of the Petroleum Exporting Countries (OPEC) decisions on adjusting production levels. However, oil investor behavior can also be a factor in the recent price behavior, especially, increasing speculative behavior of a more diverse set of investors, including hedge funds, pension funds, and investment banks. All these factors question on the issue of whether or not the crude oil markets are predictable and therefore efficient. In this paper, we analyze the efficiency of the crude oil markets. The literature on market efficiency and stock market predictability is vast, as researchers have been discussing this theme in depth from the past decades (see Fama, 1970 and Fama, 1991; Fama and French, 1988; Lo and MacKinlay, 1988; among others). A capital market is considered as efficient if stock prices at any time fully reflect all available and relevant information. Therefore, given only past price and return data, the current price is the best predictor of the future price, and the price change or return is expected to be zero. Stock prices exhibit no serial dependencies, meaning that there are no patterns to asset prices. This implies that future price movements are determined entirely by information not contained in the price series. This is the essence of the weak-form efficient market hypothesis [EMH], which implies a random walk. It is this random walk implication of the weak-form EMH that is most commonly tested in the empirical literature.1 Recently, Tabak and Cajueiro (2007), Alvarez-Ramirez et al. (2008) and Maslyuk and Smyth (2009) investigated the efficiency of crude oil markets from time-varying long-range dependence, Hurst exponent dynamics (from detrended fluctuation analysis) and unit root tests, respectively. They found that these markets are weak-form efficient. In this paper, we extend the examination of the weak-form of the EMH in the crude oil markets in two ways. First, this study is based on a more extensive sample. We study daily data for two crude oil markets, namely, the US West Texas Intermediate and the UK Brent, over the period June 1982–July 2008. We also investigate the EMH over two sub-periods in order to analyze the effects of the important structural change due to policy changes that attempted to increase the efficiency of the North American energy industry in 1993.2 Second, the weak-form EMH is evaluated from an alternative method relative to the previous studies, namely the variance ratio [VR] tests which are widely used in financial empirical studies (e.g., Lagoarde-Segot and Lucey, 2007; Kim and Shamsuddin, 2008).3 More precisely, we adopt individual non-parametric VR tests suggested by Wright (2000) as well as its multiple versions proposed by Belaire-Franch and Contreras (2004). These VR tests are robust to heteroscedasticity and non-normality which are features displayed by the crude oil prices (Pindyck, 2004; Narayan and Narayan, 2007; Kang et al., 2009), and powerful against fractionally integrated alternatives which are present in crude oil prices (Alvarez-Ramirez et al., 2008 and Alvarez-Ramirez et al., 2002; Tabak and Cajueiro, 2007). We also apply the wild-bootstrap VR tests suggested by Kim (2006) which are robust to heteroscedasticity and do not rely on asymptotic approximations. The rest of this paper is organized as follows. Section 2 discusses the variance ratio [VR] tests. Section 3 summarizes the characteristics of the data on the Brent and WTI crude oil markets. Section 4 reports the empirical results. Section 5 concludes.