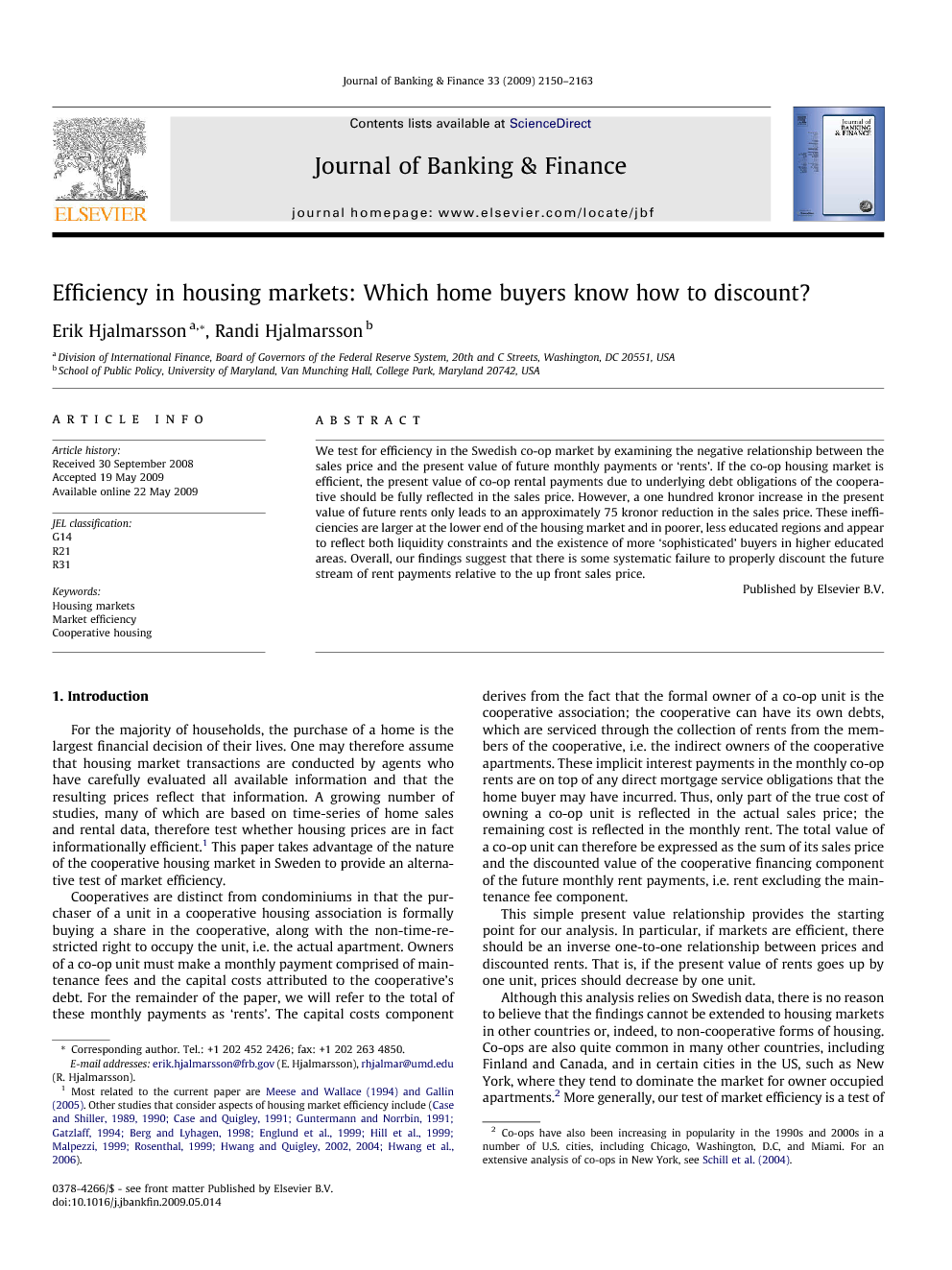 We test for efficiency in the Swedish co-op market by examining the negative relationship between the sales price and the present value of future monthly payments or ‘rents’. If the co-op housing market is efficient, the present value of co-op rental payments due to underlying debt obligations of the cooperative should be fully reflected in the sales price. However, a one hundred kronor increase in the present value of future rents only leads to an approximately 75 kronor reduction in the sales price. These inefficiencies are larger at the lower end of the housing market and in poorer, less educated regions and appear to reflect both liquidity constraints and the existence of more ‘sophisticated’ buyers in higher educated areas. Overall, our findings suggest that there is some systematic failure to properly discount the future stream of rent payments relative to the up front sales price.

We test for efficiency in housing markets using a new and novel approach. We capitalize on the fact that only part of the true price of a co-op is captured by the actual sales price, with the rest paid through monthly rents that reflect the underlying debts of the cooperative. There is thus a simple present value relationship between co-op sales prices and rents. Using hedonic price regressions, we find that, on average, higher rents are not fully compensated for by lower prices. Under realistic assumptions regarding future interest and amortization rates, a 100 SEK increase in the discounted value of future rent payments yields a reduction in the sales price of about 75 SEK. A number of explanations are discussed throughout the paper for the findings of inefficiencies. Though our data does not allow us to explicitly test one hypothesis versus another, there are strong indications that at least some of the inefficiencies are due to a fundamental failure to properly compare future rent payments with up front costs at the time of purchase. In most markets, one would expect inefficiencies to be exploited by investors and arbitraged away over time. This is less likely to be true in the current context since owners of Swedish co-ops are not allowed to rent out their apartments, thereby preventing speculators from entering this market. Thus, the inefficiencies found in this paper can only be taken advantage of by ‘smart’ buyers who realize that lower rent apartments are, in general, of better value, and the market may therefore only slowly converge towards efficient pricing.