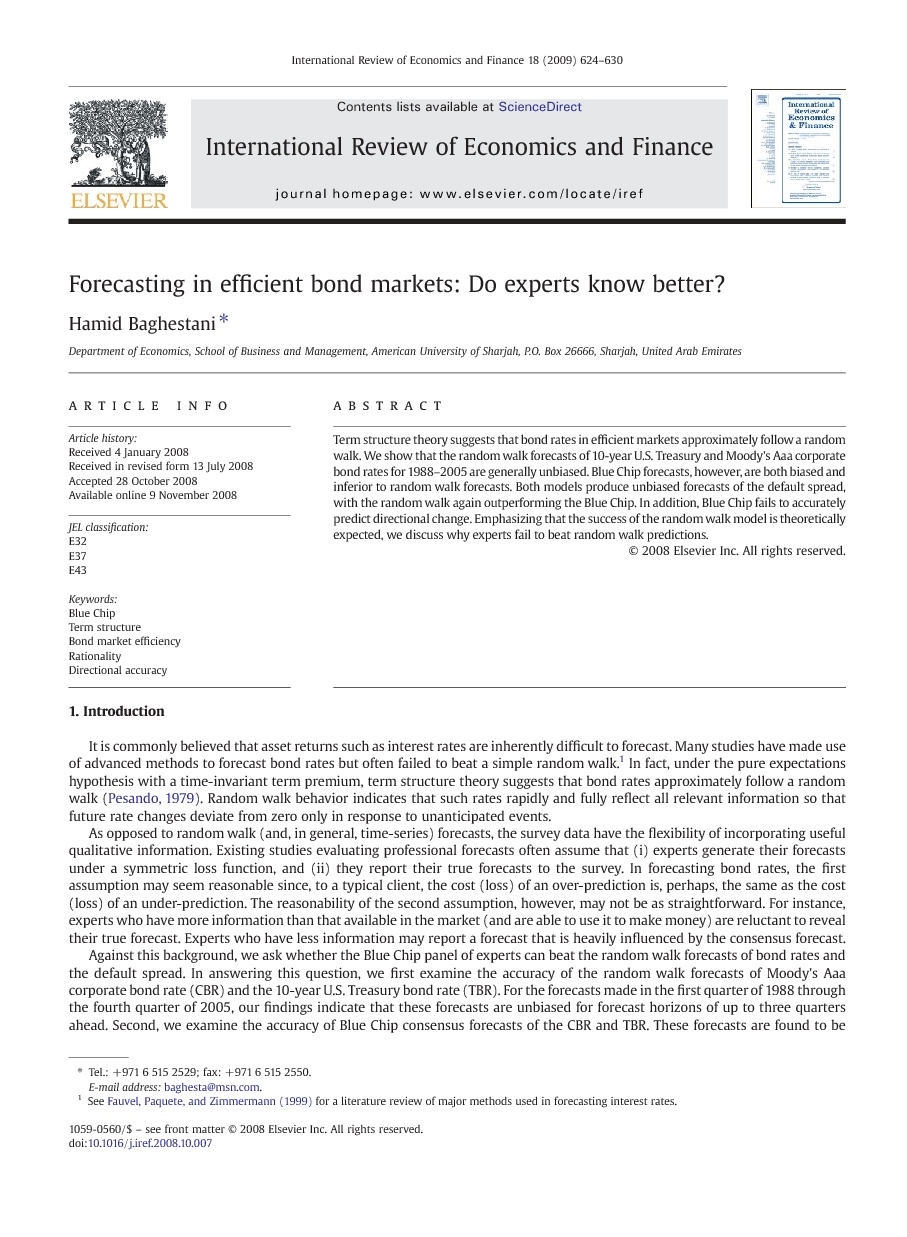 It is commonly believed that asset returns such as interest rates are inherently difficult to forecast. Many studies have made use of advanced methods to forecast bond rates but often failed to beat a simple random walk.1 In fact, under the pure expectations hypothesis with a time-invariant term premium, term structure theory suggests that bond rates approximately follow a random walk (Pesando, 1979). Random walk behavior indicates that such rates rapidly and fully reflect all relevant information so that future rate changes deviate from zero only in response to unanticipated events. As opposed to random walk (and, in general, time-series) forecasts, the survey data have the flexibility of incorporating useful qualitative information. Existing studies evaluating professional forecasts often assume that (i) experts generate their forecasts under a symmetric loss function, and (ii) they report their true forecasts to the survey. In forecasting bond rates, the first assumption may seem reasonable since, to a typical client, the cost (loss) of an over-prediction is, perhaps, the same as the cost (loss) of an under-prediction. The reasonability of the second assumption, however, may not be as straightforward. For instance, experts who have more information than that available in the market (and are able to use it to make money) are reluctant to reveal their true forecast. Experts who have less information may report a forecast that is heavily influenced by the consensus forecast. Against this background, we ask whether the Blue Chip panel of experts can beat the random walk forecasts of bond rates and the default spread. In answering this question, we first examine the accuracy of the random walk forecasts of Moody's Aaa corporate bond rate (CBR) and the 10-year U.S. Treasury bond rate (TBR). For the forecasts made in the first quarter of 1988 through the fourth quarter of 2005, our findings indicate that these forecasts are unbiased for forecast horizons of up to three quarters ahead. Second, we examine the accuracy of Blue Chip consensus forecasts of the CBR and TBR. These forecasts are found to be biased and inferior to those of the random walk. Such evidence is in line with Kolb and Stekler (1996) and Brooks and Gray (2004) who show that consensus forecasts of 30-year U.S. Treasury rates from the Wall Street Journal (WSJ) survey fail to outperform naïve random walk forecasts. Third, we examine the accuracy of random walk and Blue Chip forecasts of the default spread (CBR minus TBR). These forecasts are all unbiased, but, again, random walk outperforms Blue Chip. We further examine Blue Chip directional forecast accuracy. In line with the unfavorable findings of Greer, 1999 and Greer, 2003 for the WSJ survey forecasts, Blue Chip fails to accurately predict the direction of change in the CBR, TBR, and default spread. The format of this study is as follows: The next section describes both Blue Chip and random walk forecasts. Section 3 presents the methodology and empirical results. Section 4 concludes by discussing our findings in light of term structure theory in an efficient bond market.

Under the hypothesis of bond market efficiency with a time-invariant term premium, the expected change in long-term interest rates is close to zero (Pesando, 1979). For instance, with the assumption that the term structure is determined by the pure expectations theory, we can derive the following relationship (Reichenstein, 2006, p. 117) equation(5) View the MathML sourceEt[Rt+1m]−Rtm=(1/m)[rt+m−rt] Turn MathJax on where Rmt is the long-term interest rate on an m-period bond at time t, and rt is a one-period short-term interest rate at time t. In addition, Et[Rmt + 1] is the long-term interest rate in t + 1 expected at time t, and rt + m is the short-term interest rate in t + m expected at time t. The value of m is 40 quarters for the TBR and greater than 40 for the CBR. This indicates that the right-hand side term in Eq. (5) is close to zero and that the future TBR (CBR) is expected to be approximately today's TBR (CBR). Eq. (5) for the TBR assumes that the term premium is time-invariant. With a time-varying term premium, the right-hand side of Eq. (5) will also include the change in the corresponding term premium. Therefore, in order for the random walk forecasts of the TBR to be accurate, the predicable near-term change in the term premium should be trivial. Similarly, Eq. (5) for the CBR assumes that the term and default premiums are time-invariant. With time-varying term and default premiums, the right-hand side of Eq. (5) will also include the change in the corresponding term and default premiums. Again, in order for the random walk forecasts of the CBR to be accurate, the predicable near-term change in the term and default premiums should be trivial. Given the success of our random walk model in accurately predicting the TBR and CBR, we may argue that the predicable near-term change in the term and default premiums is, perhaps, trivial. Our findings further indicate that Blue Chip forecasts cannot match the success of random walk forecasts. In addition to being biased, Blue Chip consensus forecasts of the CBR and TBR are inefficient since they lack the predictive information in random walk forecasts. Both models produce unbiased forecasts of the default spread with random walk again outperforming Blue Chip forecasts. Further findings indicate that Blue Chip also fails to accurately predict the direction of change in the bond rates and default spread. A number of studies have tried to explain why experts' forecasts are biased. Scharfstein and Stein (1990), for instance, argue that, in producing forecasts for their clients, forecasters are concerned not only about the accuracy of their forecasts, but also about how their forecasts compare to those of other forecasters. The latter concern may stem from (i) worries about their credibility and reputation with clients in case their forecasts markedly differ from the consensus in the market, and (ii) the lack of significant private information to produce a reasonably accurate forecast. In light of our findings, however, the question is: why should the expert forecast be different from today's rate, which term structure theory suggests is the optimal near-term forecast in an efficient bond market? Batchelor and Dua (1991), who have evaluated Blue Chip forecasts of output growth, inflation, unemployment, and short-term interest rates, conclude that “patterns of forecasts across the Blue Chip panel are not inconsistent with the proposition that forecasters deliberately introduce biases, in order to differentiate their products from the consensus” (p. 704). Assuming that Blue Chip experts report their true forecasts to the survey, this observation suggests that these experts are not consensus-seekers. It may be that they have utilized advanced methods to predict the CBR and TBR. But, as indicated by term structure theory (Pesando, 1979 and Pesando, 1981) and by empirical evidence (Fauvel et al., 1999), it is difficult for any complex model to consistently beat random walk forecasts of long-term interest rates.