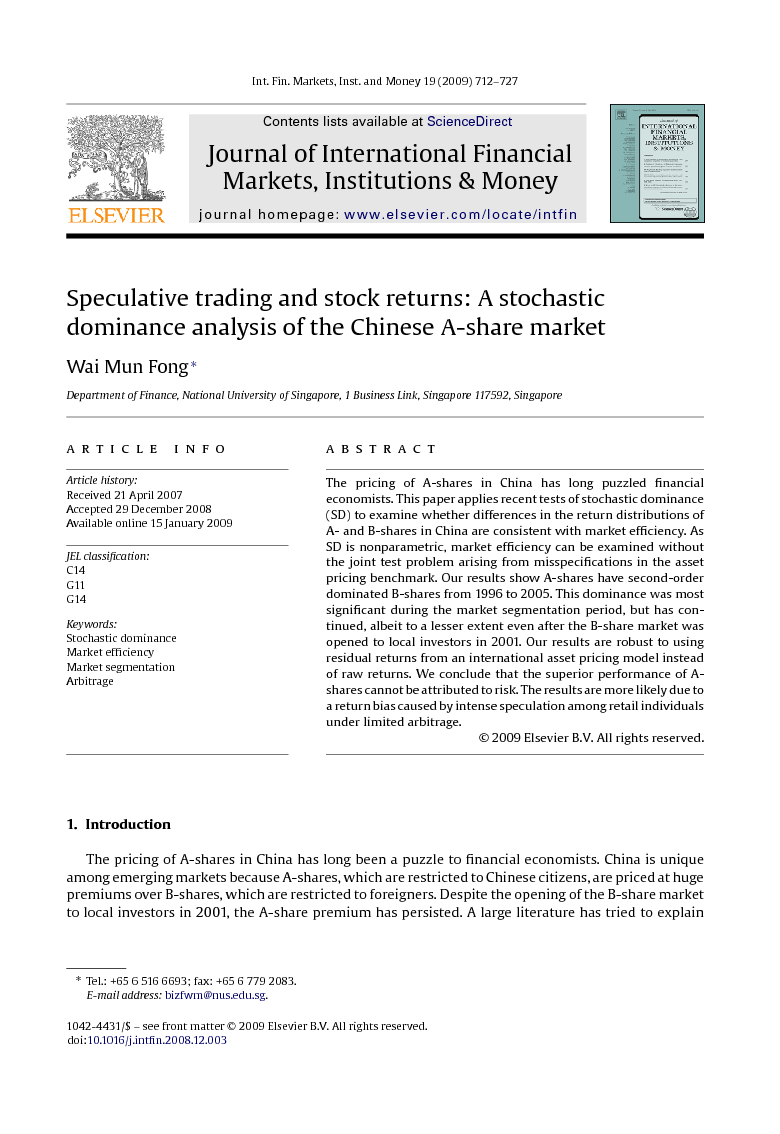 The pricing of A-shares in China has long puzzled financial economists. This paper applies recent tests of stochastic dominance (SD) to examine whether differences in the return distributions of A- and B-shares in China are consistent with market efficiency. As SD is nonparametric, market efficiency can be examined without the joint test problem arising from misspecifications in the asset pricing benchmark. Our results show A-shares have second-order dominated B-shares from 1996 to 2005. This dominance was most significant during the market segmentation period, but has continued, albeit to a lesser extent even after the B-share market was opened to local investors in 2001. Our results are robust to using residual returns from an international asset pricing model instead of raw returns. We conclude that the superior performance of A-shares cannot be attributed to risk. The results are more likely due to a return bias caused by intense speculation among retail individuals under limited arbitrage.

China's stock market presents an interesting setting to examine the effects of market frictions on pricing efficiency. The market is relatively young, dominated by retail investors and lacks a strong legal and institutional framework to protect investors’ rights. Moreover, market frictions such as exchange controls and prohibitions against short-selling also limit arbitrage. Theorists such as Miller (1977) argue that under this environment, speculative bubbles tend to form when investors have diverse beliefs since only optimistic investors will choose to be in the market. Mei et al. (2005) argue that market frictions and speculation may explain why prices of A-shares tend to exceed those of B-shares. To date, however, reasons for the existence of the A-share premium have not been resolved. Although the literature has identified liquidity and information asymmetry as important factors in explaining why some firms have higher A-share premiums than others, the basic question of whether A-shares are rationally priced is still open. This paper shows that stochastic dominance tests can be used to test the efficiency of the A-share market. We find strong evidence that A-shares second-order dominate B-shares in the full segmentation period in China. Since this result implies that all risk averse investors prefer A-shares to B-shares, the superior average return of A-shares in this period cannot be explained by risk, and is more likely a reflection of market inefficiency. The policy change of February 2001 provides us with a natural experiment to assess the impact of market reform on market efficiency. Chan et al. (2008) find that A-shares continued to dominate price discovery at the daily level after the policy change. Likewise, our results show that A-shares continued to SSD-dominate B-shares in the post-reform period. The higher turnover rate of A-shares may be the main reason why investors remain attracted to this market compared to the B-share market. Our results indicate that there is some way to go before the A-share market can be considered fully efficient.