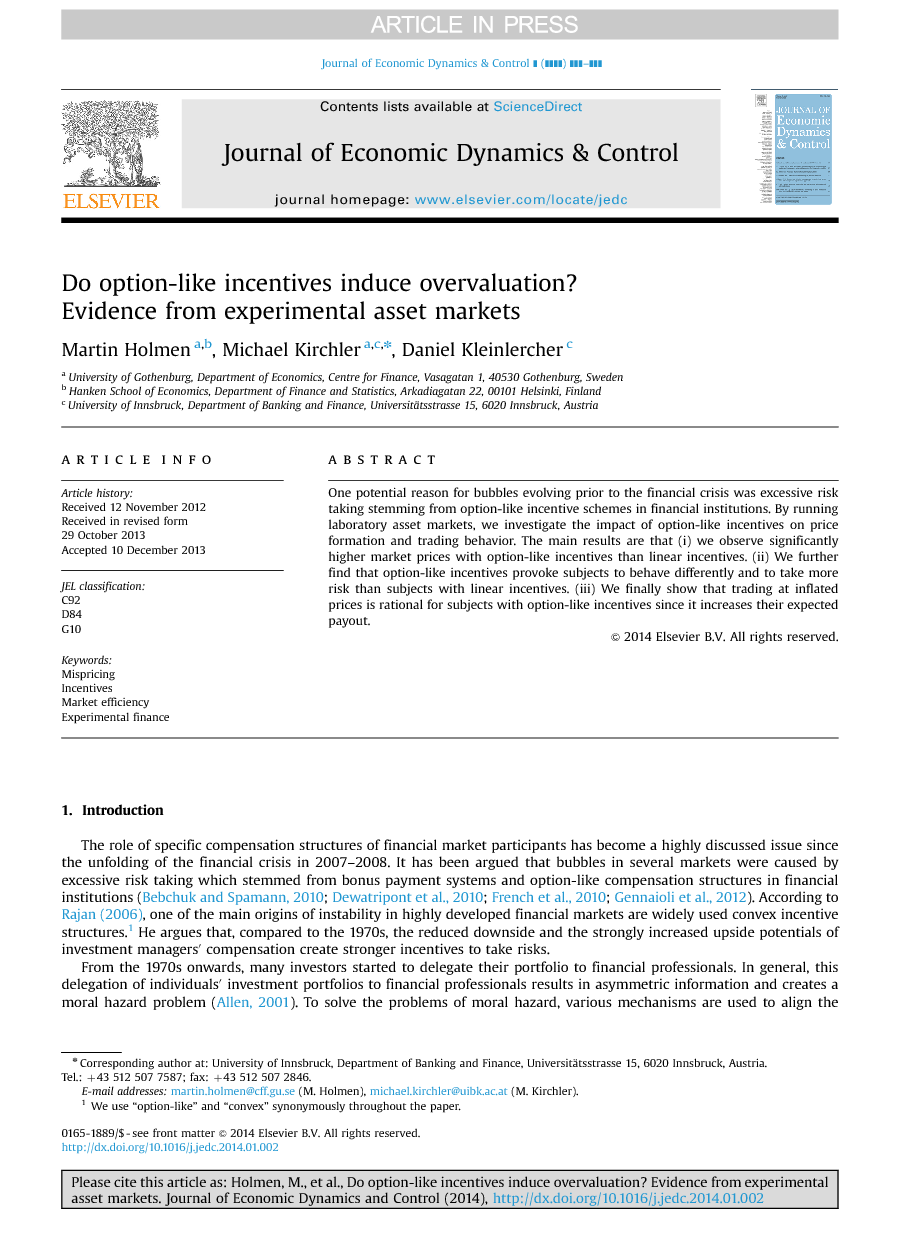 The role of specific compensation structures of financial market participants has become a highly discussed issue since the unfolding of the financial crisis in 2007–2008. It has been argued that bubbles in several markets were caused by excessive risk taking which stemmed from bonus payment systems and option-like compensation structures in financial institutions (Bebchuk and Spamann, 2010, Dewatripont et al., 2010, French et al., 2010 and Gennaioli et al., 2012). According to Rajan (2006), one of the main origins of instability in highly developed financial markets are widely used convex incentive structures.1 He argues that, compared to the 1970s, the reduced downside and the strongly increased upside potentials of investment managers' compensation create stronger incentives to take risks. From the 1970s onwards, many investors started to delegate their portfolio to financial professionals. In general, this delegation of individuals' investment portfolios to financial professionals results in asymmetric information and creates a moral hazard problem (Allen, 2001). To solve the problems of moral hazard, various mechanisms are used to align the interests of the investment manager (agent) and the investor (principal). The most common mechanisms in the financial industry are bonus payments and option-like incentive contracts (Kritzman, 1987, Allen and Gorton, 1993, Goetzmann et al., 2003 and Cuoco and Kaniel, 2011). However, Rajan (2006) argues that managerial incentives are not always aligned with the investors' interests and these misalignments may result in distortions on financial markets. Allen and Gorton (1993) model this agency problem theoretically. In their model the investment manager does not share the losses but receives a proportion of the profits. They report “rational bubbles”, as the convex incentive structure induces the investment manager to trade at prices far above fundamentals. This problem is similar to the risk-shifting problem in Jensen and Meckling (1976) where corporations' shareholders are modelled as agents and bondholders as principals. The shareholders obtain any upside potential but do not bear the full downside risk because of limited liability. Consequently, even risky negative net present value projects may be attractive for the shareholders. Likewise, Allen and Gale (2000) examine how intermediation by the banking sector leads to a similar agency problem which also results in asset bubbles. Although these financial incentives are nowadays one of the major trading motives of financial professionals, little is known about the consequences of convex incentives on market efficiency in asset markets.2James and Isaac (2000) and Isaac and James (2003) investigate price formation in experimental markets under tournament incentive structures. They show that moderate overvaluation emerges under tournament incentives for all traders. In order to analyze the effects of option-like incentives on market efficiency and investment behavior we run laboratory experiments. Inspired by Allen and Gorton (1993) and Rajan (2006), we first address the following research question: Research Question 1: Do option-like incentives trigger different market dynamics compared to linear incentives? 3 To answer research question 1, we implement two different incentive structures. In two treatments (Treatment LINEAR and Treatment CONVEX) we either apply a linear or a convex incentive structure for all subjects. This enables us to investigate the pure effects of both the incentive structures on market efficiency and other market variables. In real markets, however, investment managers with option-like incentives trade assets with investors who have linear incentives. We therefore implement a third treatment (Treatment HYBRID) in which we endow half of the subjects with convex incentives and half of the subjects with linear incentives. Thus, we formulate the second research question as follows: Research Question 2: How do interactions between heterogeneously incentivized subjects change market dynamics compared to a situation where all subjects have the same incentives? No matter whether incentives influence market dynamics or not, it is of particular interest to investigate subjects' investment behavior based on the incentives they face. Therefore, we formulate the final research question. Research Question 3: Do option-like incentives trigger different investment behavior compared to linear incentives? To answer this research question we use data of all three treatments. First, this enables us to observe behavioral differences of subjects between the base treatments LINEAR and CONVEX. Second and more importantly, this allows us to investigate how trading behavior changes when subjects with different incentives compete against each other in Treatment HYBRID. Our main results include (i) significantly higher market prices when subjects are incentivized with option-like incentives than with linear incentives. (ii) We further show that option-like incentives induce subjects to behave differently and to take more risk than subjects with linear incentives. (iii) Finally, we report that trading at inflated prices is rational from an individual perspective since it increases the expected payout of option-like incentivized subjects. In real markets, overvalued assets would of course be harmful for the investors who delegate their portfolio to investment managers as prices no longer reflect the assets' future cash flows.

In this paper we used laboratory asset markets to examine whether option-like incentives lead to different market dynamics and investment behavior. Our main results are that (i) we observed overvalued prices when subjects were endowed with option-like incentives. Furthermore, (ii) we found that subjects, when incentivized option-like, showed a different trading behavior and took on significantly more risk than subjects with linear incentives. (iii) We concluded that trading at overvalued prices and taking on excessive risks were rational for traders with convex incentives. Due to the convexity of option-like incentives trading at these prices increases traders' expected payouts. Although rational from a trader perspective, overvalued assets are harmful for other market participants. (1) Investors frequently delegate their portfolio to investment managers with convex incentives. These investors, however, face a linear incentive structure and therefore carry the losses of buying overvalued assets. Furthermore, (2) capital market efficiency would be harmed as asset prices do no longer reflect discounted future cash flows. With this study we extend the existing literature along three dimensions. First, we contribute to the literature on whether option-like incentives lead to a risk-shifting problem and asset overvaluation as argued by Allen and Gorton (1993). Our experimental results suggest that when subjects have convex incentives, they quickly recognize the risk-shifting problem and bid up prices close to their individual reservation price. Thus, we arrive experimentally at similar results as Allen and Gorton (1993). Second, earlier experimental studies on asset overvaluation mainly discuss irrational explanations such as capital-gains trading (Smith et al., 1988), speculation (Lei et al., 2001) or confusion (Kirchler et al., 2012). We contribute to this line of literature by documenting rational overvaluation rather than irrational reasons. Third, our research is in line with the claim of Rajan (2006) that one of the main origins of instability in highly developed financial markets are convex incentives of market participants. Compared to the 1970s the reduced downside and strongly increased upside potentials of investment managers' compensation create stronger incentives to take risks. Consequently, this increases the likelihood that managerial incentives are not always aligned with the investors' interests and these misalignments may result in distortions such as mispricing of assets. Given our results, it might therefore be optimal to design incentive contracts with stronger downside potential to reduce risk taking of investment managers. We leave this issue open for further research.