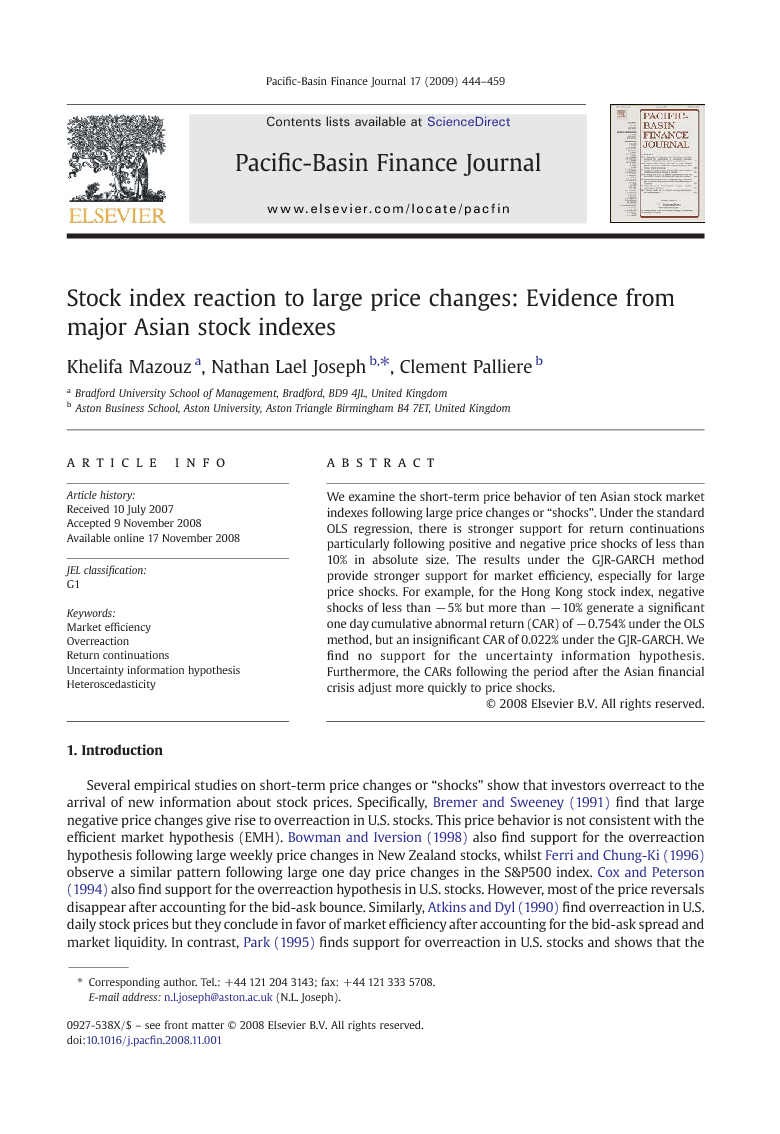 We examine the short-term price behavior of ten Asian stock market indexes following large price changes or “shocks”. Under the standard OLS regression, there is stronger support for return continuations particularly following positive and negative price shocks of less than 10% in absolute size. The results under the GJR-GARCH method provide stronger support for market efficiency, especially for large price shocks. For example, for the Hong Kong stock index, negative shocks of less than − 5% but more than − 10% generate a significant one day cumulative abnormal return (CAR) of − 0.754% under the OLS method, but an insignificant CAR of 0.022% under the GJR-GARCH. We find no support for the uncertainty information hypothesis. Furthermore, the CARs following the period after the Asian financial crisis adjust more quickly to price shocks.

This empirical study examines the short-term reaction of ten Asian stock indexes following large price shocks. We use both OLS and GARCH-based estimation methods to generate the CARs over a window of ten days after the shocks. Our results based on the symmetric GARCH and GJR-GARCH methods are generally similar; so we focus mainly on the OLS and GJR-GARCH results. There is substantial variation in the effects of shocks across the ten indexes indicating that the price reaction varies by country. This feature can be due to differences in the way investors process unexpected information in those countries, but we leave this aspect for further research. There are also differences in the results due to the estimation method. Specifically, for the full period, the OLS method provides stronger support for return continuations, particularly following positive shocks within + 5% < st+ < + 10% and negative shocks within − 5% ≥ st− > − 10%. There is some support for market efficiency, but this support is not as strong compared with return continuations. There is also mixed support for market efficiency and overreaction following positive shocks of st+ ≥ + 10%. However, overreaction is more pronounced following negative shocks of st− ≤ − 10%. The GJR-GARCH results contrast substantially with those of the OLS for the full period. Return continuations dominate following positive shocks within the range of + 3% < st+ < + 5% whilst market efficiency dominates following negative shocks within − 3% > st− > − 5%. Larger positive and negative trigger values largely provide support market efficiency. This finding is strongest following shocks of st+ ≥ + 10% and st− ≤ − 10% and here, all support for return continuations and the overreaction hypothesis completely disappears. The volatility estimates are typically negative and larger shocks give rise to larger volatility estimates. Our results do not support the UIH. Furthermore, the markets appear more efficiency over the post-Asian financial crisis. We still do not find support for the UIH over the pre- and post-Asian financial crisis. Since we find that return continuations dominate at small trigger values whilst overreaction and/or EMH is more pronounced at larger trigger values, it appears that the results obtained depend on the magnitude of the shock. Specifically, prior studies that support overreaction or market efficiency tend to employ relatively large trigger values (see e.g., Brown and Harlow, 1988).15 In contrast, Lasfer et al. (2003) find support for return continuations using a trigger value within a small range of the standard deviation. If investor over-confidence and self-attribution can explain price overreaction and momentum around public events (see Daniel et al., 1998), our results demonstrate a related reaction in the very short-term for unexpected events. Furthermore, the choice of the estimation method leads to different results about price reaction. The greater support for market efficiency under the GARCH-based methods is in line with Fama's (1998) view that the evidence on short- to long-term market anomalies can be model dependent.16