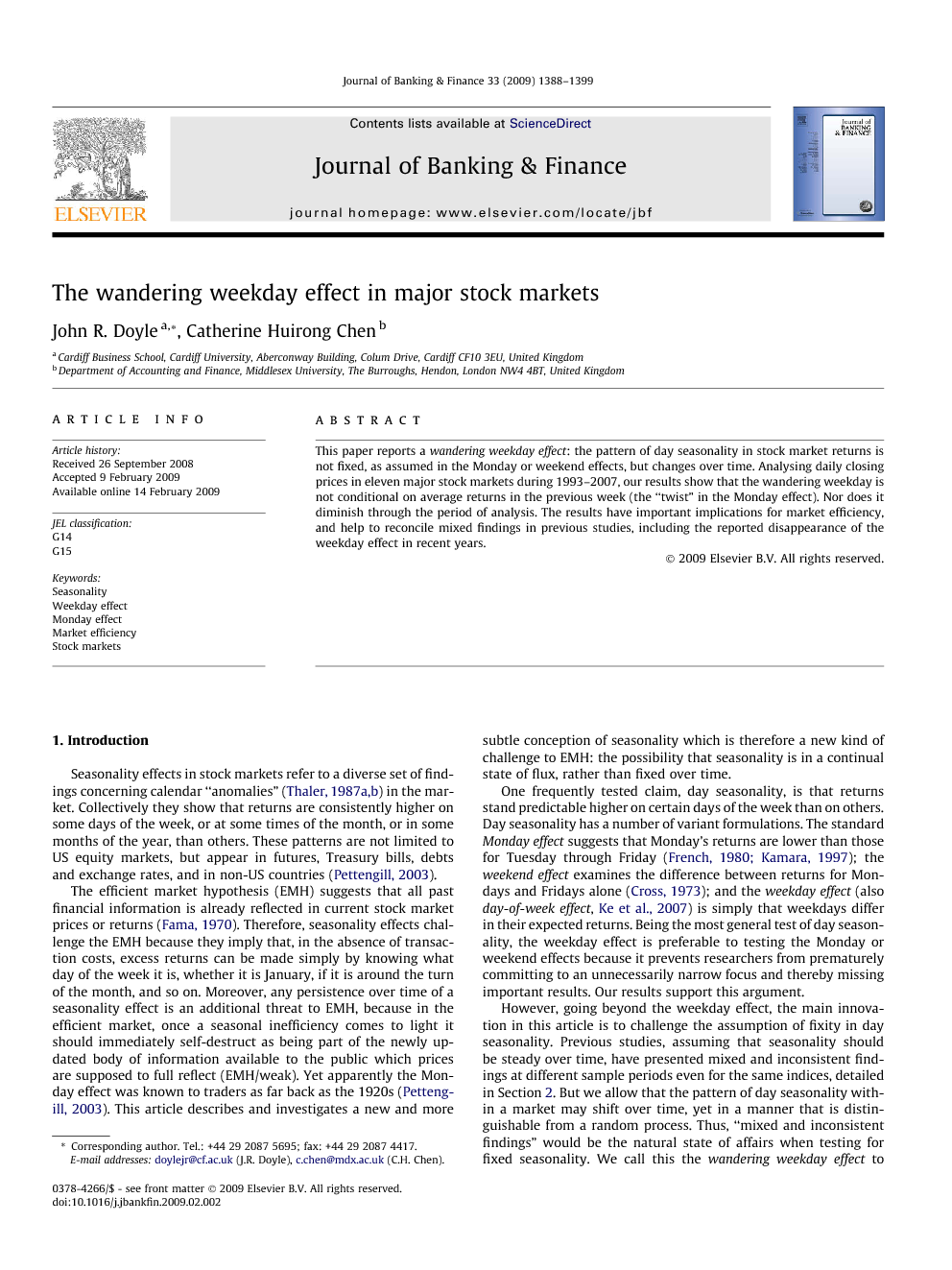 This paper reports a wandering weekday effect: the pattern of day seasonality in stock market returns is not fixed, as assumed in the Monday or weekend effects, but changes over time. Analysing daily closing prices in eleven major stock markets during 1993–2007, our results show that the wandering weekday is not conditional on average returns in the previous week (the “twist” in the Monday effect). Nor does it diminish through the period of analysis. The results have important implications for market efficiency, and help to reconcile mixed findings in previous studies, including the reported disappearance of the weekday effect in recent years.

Seasonality effects in stock markets refer to a diverse set of findings concerning calendar “anomalies” (Thaler, 1987a and Thaler, 1987b) in the market. Collectively they show that returns are consistently higher on some days of the week, or at some times of the month, or in some months of the year, than others. These patterns are not limited to US equity markets, but appear in futures, Treasury bills, debts and exchange rates, and in non-US countries (Pettengill, 2003). The efficient market hypothesis (EMH) suggests that all past financial information is already reflected in current stock market prices or returns (Fama, 1970). Therefore, seasonality effects challenge the EMH because they imply that, in the absence of transaction costs, excess returns can be made simply by knowing what day of the week it is, whether it is January, if it is around the turn of the month, and so on. Moreover, any persistence over time of a seasonality effect is an additional threat to EMH, because in the efficient market, once a seasonal inefficiency comes to light it should immediately self-destruct as being part of the newly updated body of information available to the public which prices are supposed to full reflect (EMH/weak). Yet apparently the Monday effect was known to traders as far back as the 1920s (Pettengill, 2003). This article describes and investigates a new and more subtle conception of seasonality which is therefore a new kind of challenge to EMH: the possibility that seasonality is in a continual state of flux, rather than fixed over time. One frequently tested claim, day seasonality, is that returns stand predictable higher on certain days of the week than on others. Day seasonality has a number of variant formulations. The standard Monday effect suggests that Monday’s returns are lower than those for Tuesday through Friday ( French, 1980 and Kamara, 1997); the weekend effect examines the difference between returns for Mondays and Fridays alone ( Cross, 1973); and the weekday effect (also day-of-week effect, Ke et al., 2007) is simply that weekdays differ in their expected returns. Being the most general test of day seasonality, the weekday effect is preferable to testing the Monday or weekend effects because it prevents researchers from prematurely committing to an unnecessarily narrow focus and thereby missing important results. Our results support this argument. However, going beyond the weekday effect, the main innovation in this article is to challenge the assumption of fixity in day seasonality. Previous studies, assuming that seasonality should be steady over time, have presented mixed and inconsistent findings at different sample periods even for the same indices, detailed in Section 2. But we allow that the pattern of day seasonality within a market may shift over time, yet in a manner that is distinguishable from a random process. Thus, “mixed and inconsistent findings” would be the natural state of affairs when testing for fixed seasonality. We call this the wandering weekday effect to distinguish it from the previously researched fixed weekday effect. To test the wandering weekday effect we model it as the interaction of the weekday effect with time, and establish that it is present in all the leading stock markets. We also show that the wandering weekday is robust to different formulations, is not driven by market trends ( Jaffe et al., 1989), and has not vanished over time, contrary to Kohers et al. (2004). The wandering weekday is important for several reasons. Looking to future research, it establishes a whole new way that markets can be shown to be inefficient, instantly increasing the vulnerability of EMH. By the same token, it means that any general theory of weekday effects must be able to account for a much more complex set of findings, which makes life difficult for them too. Looking to past research, it helps explain why evidence concerning a (fixed) weekday effect has sometimes been equivocal: different results are to be expected if data have been sampled in different time frames. The layout of this article is as follows. Section 2 reviews past evidence for seasonality effects. Section 3 describes the sample and models to be run. Section 4 presents the results in four sub-sections. Section 5 is the discussion.

This article makes the case for analyzing day seasonals as time-varying rather than as fixed in time. Doing so reveals new sources of market inefficiency that the standard perspective ignores. When analyzing for fixed seasonality effects among days of the week, and combining over indices, our results show there are no Monday or weekend effects, but there is a significant general weekday effect. This provides evidence for market inefficiency and also demonstrates that analyzing for general weekday effects is superior to the specific Monday or weekend effects. What the weekday effect loses in statistical power over more precise tests, it more than makes up for in capturing more subtle between-weekday variability. More importantly, we show the wandering weekday effect, which abandons the assumption that a weekday effect is fixed over time, detects previously uncharted inefficiencies. Under this analysis all markets are seen to be inefficient, whereas the fixed weekday identified a minority as inefficient. We find these results robustly whether ARMA components are analyzed or not, and whether Gaussian disturbances are assumed or not. Generally speaking, those markets we expect to be comparatively more inefficient are so: China and India versus the western markets; Amex and Nasdaq versus NYSE. Analyzing the relative efficiencies of markets by these and other means may be a fruitful line of future research, particularly if these could be related to market specific factors that might explain these inefficiencies. We then establish the credibility of the conditional weekday effect as a potential challenger to the wandering weekday. We show that the average returns of last week, whether positive versus negative, affects the form of between-weekday returns for this week. This effect is present through all markets. If a particular year consists of mostly negative return weeks, while another contains mostly positive return weeks, this alone could drive changes to the weekday effect. However, when pitted in direct competition, the size of the contribution made by the wandering weekday is barely reduced when the conditional weekday is accounted for. The wandering weekday must be capturing sources of day seasonal variability that cannot be explained by short-term rises of falls in the market. Finally, decomposing the wandering weekday effect into its constituent year-weekday effects, we show that size of the weekday effect across the markets in our sample, has not decreased over the years (towards an efficient market). It is as strong now as it was 15 years ago. Yet these findings contradict the conclusions drawn by Kohers et al. (2004, p. 170): “With improvements in market efficiency over time, the day-of-the-week effect may have disappeared in more recent years.” This contradiction is particularly surprising because the years they analyse (1990–2002) and several of the markets (USA, Japan, UK, France, Germany, Hong Kong) overlap our own sample. Although Kohers et al.’s sample only included developed economies, the contradiction cannot be attributed to the developing economies in our sample. We found the same lack of trend towards efficiency when both developed and developing economies were examined as separate subsets. Two more plausible reasons for the discrepancy are first, that we take the entire sample of indices as our ultimate unit of analysis, and combine small weekday effects from each index into annual tests of market efficiency. On the other hand, Kohers et al. take the individual index as their unit of analysis, and do not assess whether the separate small signals from multiple markets add up to a more comprehensive, and therefore sensitive view of market inefficiency. Second, from analyzing the fixed weekday effect over a 15 year period, our results suggest that its long-term memory may be poor. But analyzing in time-slices of one year (either as year × day interactions, or as single year weekday effects to be later aggregated) ensures that its memory is checked frequently enough, and over short enough durations, to detect that it must remember. By contrast, Kohers et al. reported 6- and 11-year time-slices. What seems to be important in analyzing modern data is to cast a net with a sufficiently fine mesh. To conclude, this article reports a wandering weekday effect for the major stock market indices. Our results show that the weekday effect wanders in a way that must lie between a random walk and a fixed (weekday) effect. This finding provides new evidence against the EMH. However, given that we have no universal principle to show us how it wanders (and there may be none), it is difficult to extract excess returns from it. In this way markets, though still demonstrably inefficient, may yet “satisfice” by being efficient enough to discourage the search for anomalous returns.