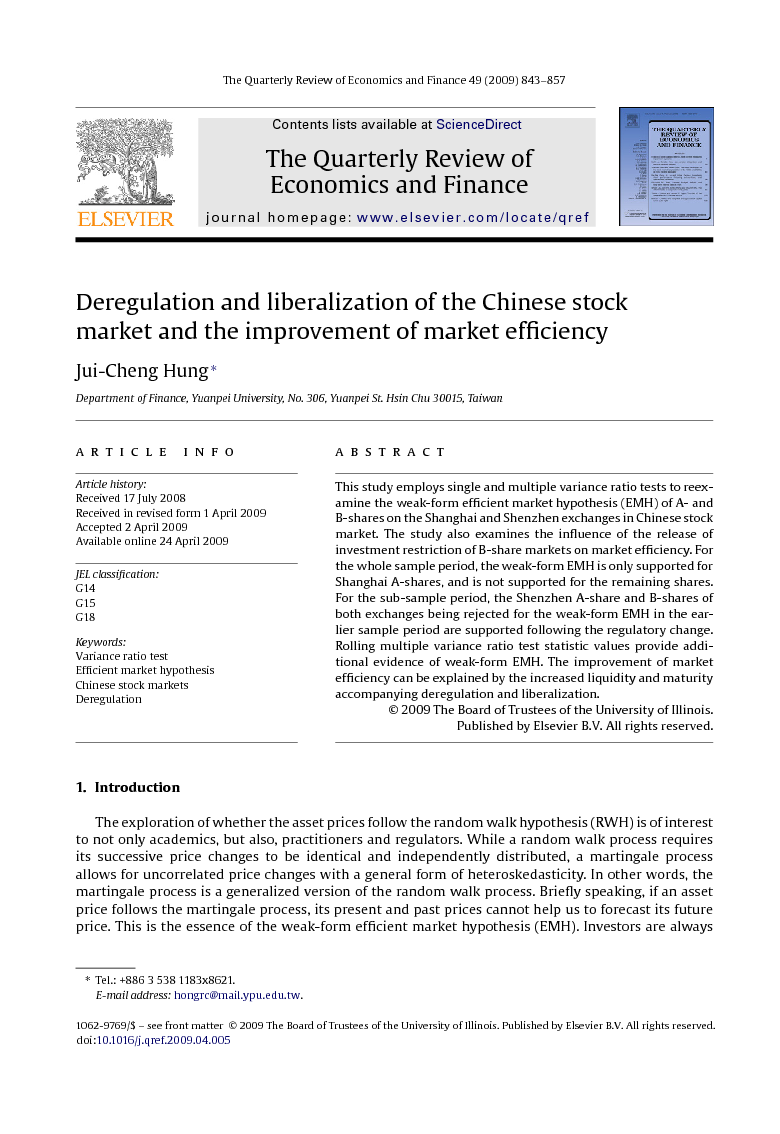 This study employs single and multiple variance ratio tests to reexamine the weak-form efficient market hypothesis (EMH) of A- and B-shares on the Shanghai and Shenzhen exchanges in Chinese stock market. The study also examines the influence of the release of investment restriction of B-share markets on market efficiency. For the whole sample period, the weak-form EMH is only supported for Shanghai A-shares, and is not supported for the remaining shares. For the sub-sample period, the Shenzhen A-share and B-shares of both exchanges being rejected for the weak-form EMH in the earlier sample period are supported following the regulatory change. Rolling multiple variance ratio test statistic values provide additional evidence of weak-form EMH. The improvement of market efficiency can be explained by the increased liquidity and maturity accompanying deregulation and liberalization.

The exploration of whether the asset prices follow the random walk hypothesis (RWH) is of interest to not only academics, but also, practitioners and regulators. While a random walk process requires its successive price changes to be identical and independently distributed, a martingale process allows for uncorrelated price changes with a general form of heteroskedasticity. In other words, the martingale process is a generalized version of the random walk process. Briefly speaking, if an asset price follows the martingale process, its present and past prices cannot help us to forecast its future price. This is the essence of the weak-form efficient market hypothesis (EMH). Investors are always interested in identifying market inefficiency, which the behavior of asset prices might be characterized by predictable patterns (Fama, 1970 and Fama, 1991). However, regulators mainly endeavor to create an efficient capital market, where newly released information can be instantly and fully reflected in asset prices and encourage buyers and sellers to rapidly make transactions with reasonable prices. Regulators anticipate providing efficient markets for investors since this will attract international capital to their market and stimulate economic growth. The China government, through the China Securities Regulatory Commission (CSRC), announced to release investing restriction of B-share markets on 19 February 2001, which allows domestic residents to trade in B-share markets. An interesting topic that arises from this regulatory change concerns the efficiency of the stock markets, and the market regulators are eager to understand whether this regulatory change has improved the efficiency of the A- and B-share markets. The objective of this study aims to reexamine the issue of weak-form EMH of Chinese stock markets, and whether stock market efficiency has been improved after deregulation in the B-share markets of the Shanghai and Shenzhen stock exchanges. Numerous empirical studies have tested the weak-form EMH by using the variance ratio test of Lo and Mackinlay (1988) (hereafter, LOMAC). Although LOMAC (1989) and Liu and He (1991) asserted that the heteroskedasticity-robusted variance ratio is more powerful and efficient than the Box–Pierce or Dickey-Fuller test (1979), it fails to control the joint-test size and is associated with a large probability of Type-I error, as demonstrated by Chow and Denning (1993) (hereafter, CHODE). Recently, Wright (2000) developed the ranks and signs-based variance ratio tests, which involve no size distortions and distribution assumptions. These tests thus have superior testing power to the LOMAC variance ratio test. Consequently, this study combines the variance ratio test statistics, proposed by LOMAC (1988) and Wright (2000), with the multiple test procedure by CHODE as its empirical methodology. The main contribution of this study is to investigate the weak-form EMH of Chinese stock markets and the influence of the regulatory change on market efficiency by applying more up-to-date methodologies to improve the robustness of the empirical results. Additionally, rolling variance ratio tests1 are carried out to provide a dynamic inspection of the regulatory change on market efficiency. The results indicate that the A-share market of Shenzhen and B-share markets of both exchanges become efficient after the deregulation of B-share markets. It is worth to note that, as suggested by the rolling results, the market efficiency of Chinese stock market cannot be entirely explained by the influence of releasing investing restrictions on the B-share market. The remainder of this paper is organized as follows. Section 2 provides a brief introduction of Chinese stock market and literature review. Section 3 describes the econometric methodology. Data description and empirical results are then reported in Section 4. Finally, conclusions are presented in the last section.

This study adopted single and multiple variance ratio tests, which combined the methods of LOMAC (1988), CHODE (1993) and Wright (2000), to investigate the weak-form EMH of the A- and B-shares markets of the Shanghai and Shenzhen exchanges in Chinese stock market. The ranks and signs-based multiple variance ratio tests of Belaire-Franch and Contreras (2004) are more powerful than the parametric multiple variance ratio test of CHODE. The ranks-based multiple variance ratio tests are exact under the independence and identical distribution assumption, while the sign-based tests are exact even under conditional heteroskedasticity. This study also examines the influence of the release of investment restrictions on the B-share markets on the market efficiency of Chinese stock market. Consequently, the whole sample period, ranging from 5 April 1996 to 30 December 2005, is divided into two sub-samples. For the whole sample period, it is consistently found that SHBI, SZAI and SZBI are not supported by weak-form EMH judging by the single variance ratio test statistics of R1, R2, S1 and S2 for all time intervals. Combined with the multiple variance ratio test of CHODE, SHAI is weakly rejected at the 10% level by View the MathML sourceR1*, and SHBI, SZAI, SZBI are all strongly rejected at the 1% level by View the MathML sourceR1*, View the MathML sourceR2* and View the MathML sourceS1*. Furthermore, SZAI and SZBI are also rejected by View the MathML sourceS1* at the 5% level. A more robust finding is that weak-form EMH is invalid for the B-shares on Shanghai exchange and both AB-shares on Shenzhen exchange, but is supported for the Shanghai A-share market throughout the sample period. Nevertheless, these results are not completely consistent with the past literature. For the analyses of sub-samples, the conclusions during the first sub-period are the same as the whole sample period. However, except for SHAI, opposite results are found for the second sub-sample than for the first sub-sample. All stock indices reveal evidence of weak-form EMH, and the change in market efficiency may result from the regulatory transformation associated with the release of investment restrictions on the B-share market. However, the rolling results demonstrate that the explanation for the efficiency of Chinese stock markets cannot be entirely ascribed to the influence of releasing investing restrictions on the B-share market. It is certain that the improvement of market efficiency can be explained by the increase of liquidity and maturity accompanied by deregulation and liberalization.