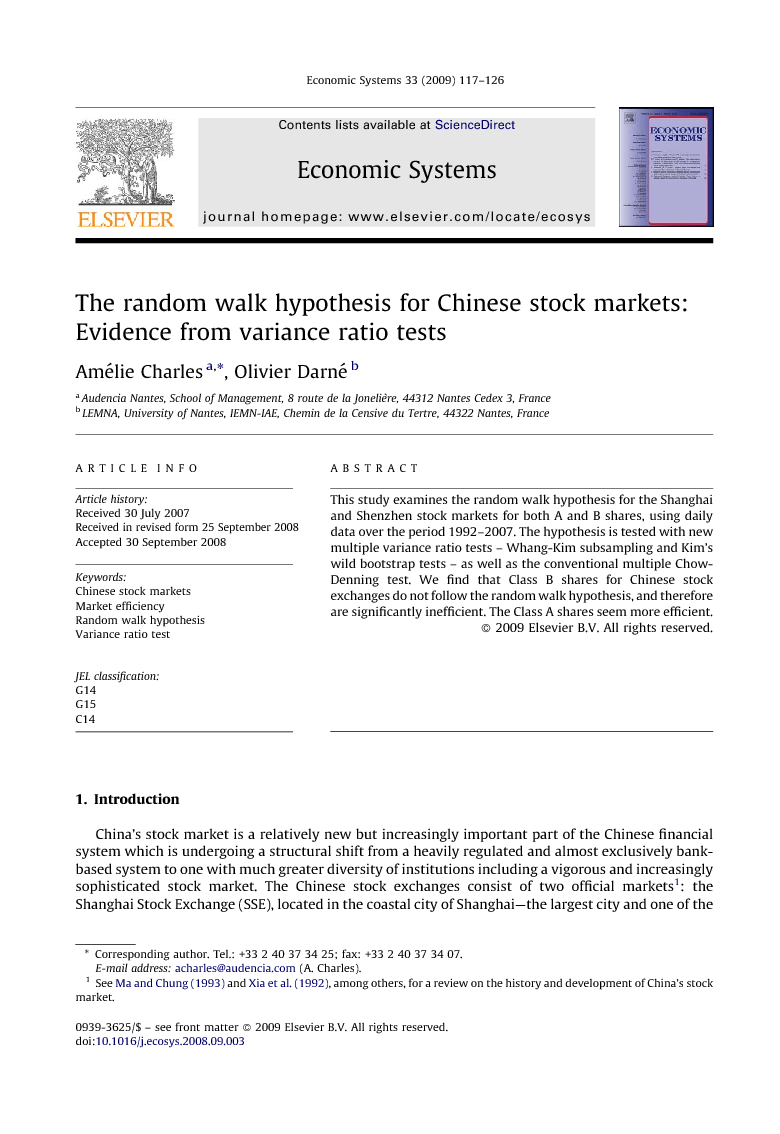 This study examines the random walk hypothesis for the Shanghai and Shenzhen stock markets for both A and B shares, using daily data over the period 1992–2007. The hypothesis is tested with new multiple variance ratio tests – Whang-Kim subsampling and Kim's wild bootstrap tests – as well as the conventional multiple Chow-Denning test. We find that Class B shares for Chinese stock exchanges do not follow the random walk hypothesis, and therefore are significantly inefficient. The Class A shares seem more efficient.

China's stock market is a relatively new but increasingly important part of the Chinese financial system which is undergoing a structural shift from a heavily regulated and almost exclusively bank-based system to one with much greater diversity of institutions including a vigorous and increasingly sophisticated stock market. The Chinese stock exchanges consist of two official markets1: the Shanghai Stock Exchange (SSE), located in the coastal city of Shanghai—the largest city and one of the financial centres in China, and Shenzhen Stock Exchange (SZE), situated in the southern city of Shenzhen, which is the first and most important special economic zone in China neighboring Hong Kong. SSE was established on November 26, 1990 and started trading on December 19 of the same year, and SZE was established on December, 1, 1990 and started trading on July 3, 1991. There are some differences between these two stock exchanges. First, the characteristics of companies listed in these two stock exchanges are different. While most companies listed on the SSE are large and state-owned, those on the SZE are small joint ventures, and export-oriented. Second, the relative size of these two markets has been undergoing major changes, such as government policy shift.2 SSE and SZE principally trade two classes of shares, which are A and B shares.3 A shares are denominated and traded in the local currency, Renminbi [RMB], and designed for domestic investors,4 and B shares are denominated in RMB but are subscribed and traded in foreign currencies, either US dollars in the SSE or HK dollars in the SZE. Since February 2001, B shares have been opened to domestic Chinese investors holding US or HK dollars. This policy change has greatly stimulated the trading of B shares and accelerated the market integration process of A share markets with B share markets and international stock markets. There are substantially different characteristics in the market for these two types of shares. Of these two types of shares listed on the domestic exchanges, A share trades dominate, both in terms of size and level of activity. Indeed, the average volume traded in Class A is approximately 40 times the average volume traded in Class B, therefore the Class A shares should be more liquid. Furthermore, the main investors in Class A shares are individuals, while Class B shares are mainly owned by large foreign institutional investors.5 Moreover, foreign investors in the Chinese stock markets may be at an informational disadvantage relative to domestic Chinese investors (information asymmetry) due to language barriers, different accounting standards and the lack of reliable information about local firms (Chakravarty et al., 1998 and Chan et al., 2006). Chinese companies that are listed as B shares are subject to stricter disclosure requirements and are generally more financially stable than A share companies. Finally, the returns to A and B shares have behaved quite differently, for example, Chen et al. (2001) argued that A shares are over-priced and that the returns to B shares move more closely with market fundamentals than do those for A share prices. All these factors may imply different efficiency behavior between the A and B shares. Since their establishment, the two exchanges expanded rapidly and operated in a continually changing regulatory environment. China's stock market is now the second largest in Asia, after Japan. The speculation is that China's securities market has the potential to rank among the top four or five in the world within the coming decade (Ma and Folkerts-Landau, 2001). In this paper, we analyze the efficiency of the Chinese stock markets.6 The literature on market efficiency and stock market predictability is vast, as researchers have been discussing this theme in depth for the past decades (see Fama, 1970, Fama, 1991, Fama and French, 1988 and Lo and MacKinlay, 1988; among others). A capital market is considered as efficient if stock prices at any time fully reflect all available and relevant information. Therefore, given only past price and return data, the current price is the best predictor of the future price, and the price change or return is expected to be zero. This is the essence of the weak-form efficient market hypothesis [EMH], which implies a random walk. It is this random walk implication of the EMH which is most commonly tested in the empirical literature. Various methodologies have been used to test the EMH for Chinese stock markets, obtaining mixed results (see Table 1). Wu (1996), Laurence et al. (1997) and Mookerjee and Yu (1999) applied serial correlation tests while Liu et al. (1997), Groenewold et al. (2003) and Seddighi and Nian (2004) employed unit root tests. However, Lo and MacKinlay (1989) showed that unit root and serial correlation tests are less powerful than variance ratio [VR] tests, especially in the presence of heteroscedasticity. Thus, Long et al. (1999), Darrat and Zhong (2000), Ma and Barnes (2001), Lee et al. (2001), Lima and Tabak (2004) and Fifield and Jetty (2008)7 used the individual Lo-MacKinlay VR test but did not find a consensus on the weak-form efficiency for Chinese stock markets.