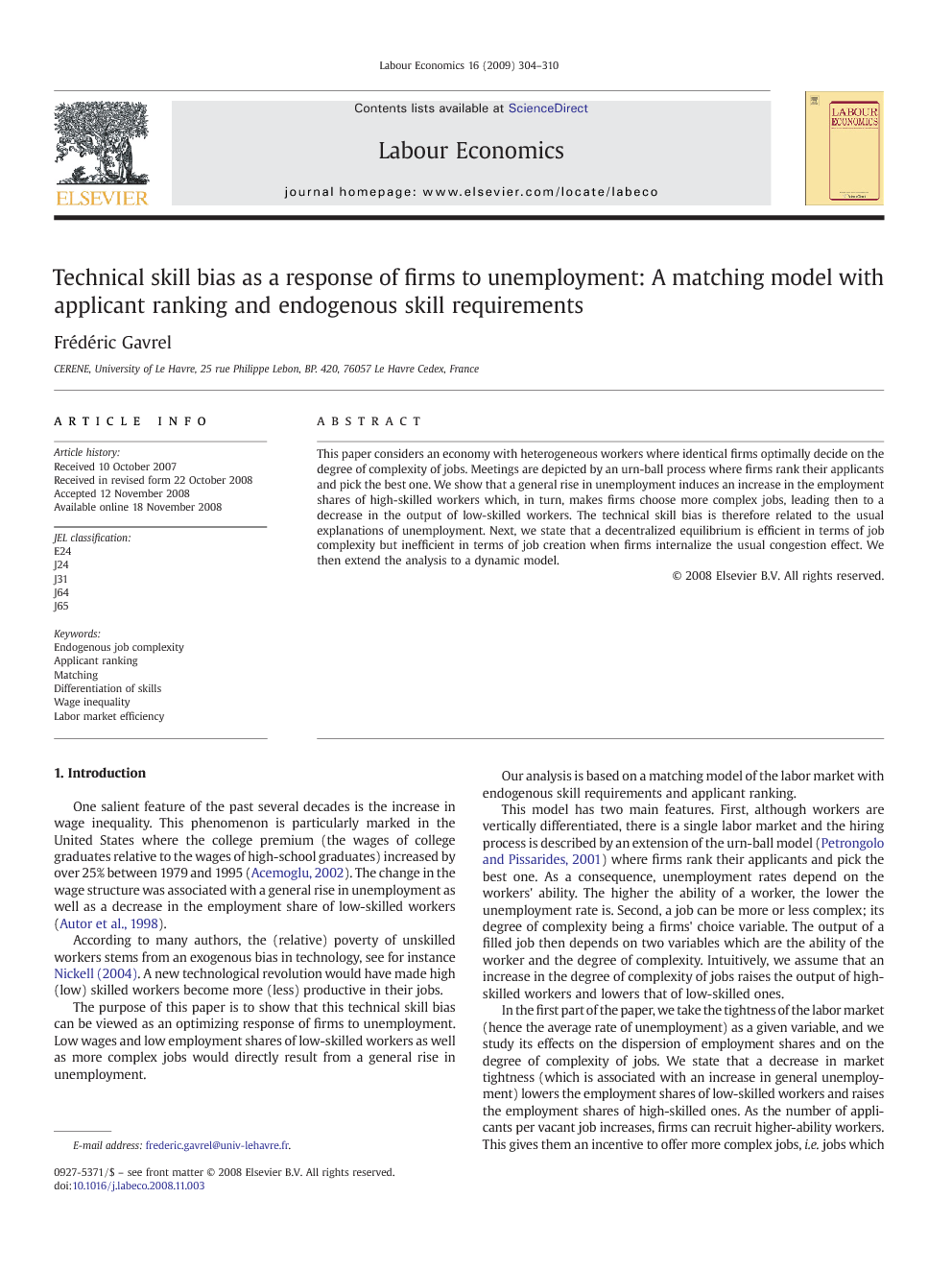 This paper considers an economy with heterogeneous workers where identical firms optimally decide on the degree of complexity of jobs. Meetings are depicted by an urn-ball process where firms rank their applicants and pick the best one. We show that a general rise in unemployment induces an increase in the employment shares of high-skilled workers which, in turn, makes firms choose more complex jobs, leading then to a decrease in the output of low-skilled workers. The technical skill bias is therefore related to the usual explanations of unemployment. Next, we state that a decentralized equilibrium is efficient in terms of job complexity but inefficient in terms of job creation when firms internalize the usual congestion effect. We then extend the analysis to a dynamic model.

To sum up, these results suggest that low wages and employment shares of low-skilled workers may come from a general rise in unemployment which would also explain the increase in job complexity. So, the technical skill bias would not be the cause of high unemployment but its consequence. Our analysis also showed that allowing firms to rank applicants highlights a new externality of job creation. The model we proposed is based on some restrictive assumptions. In particular, the analysis should be extended to the case where the destruction probability of a job depends on the worker's ability. Introducing alternative wage-setting mechanisms is likely to affect the efficiency results. In this respect, we surmise that with posted wages (Moen, 1997), market efficiency would be restored. It would be particularly interesting to introduce a mandatory minimum wage. This labor market institution could explain why the increase in wage inequality is not as sharp in many European countries as in the United States and the United Kingdom (Katz and Autor (1997)). As Acemoglu (2002) points out, a binding minimum wage makes the firm be the full residual claimant of an increase in the output of unskilled workers (who are on the minimum). Firms would therefore have a greater incentive to raise the productivity of unskilled workers by reducing job complexity. Consequently, the wage of skilled workers as well as inequality would be lower in the presence of a minimum wage. To conclude, we would like to note that market uniqueness is as unrealistic an assumption as perfectly segmented sub-markets. A middle term should be found. In this respect, one preliminary question must be addressed which is how the number of markets is determined.