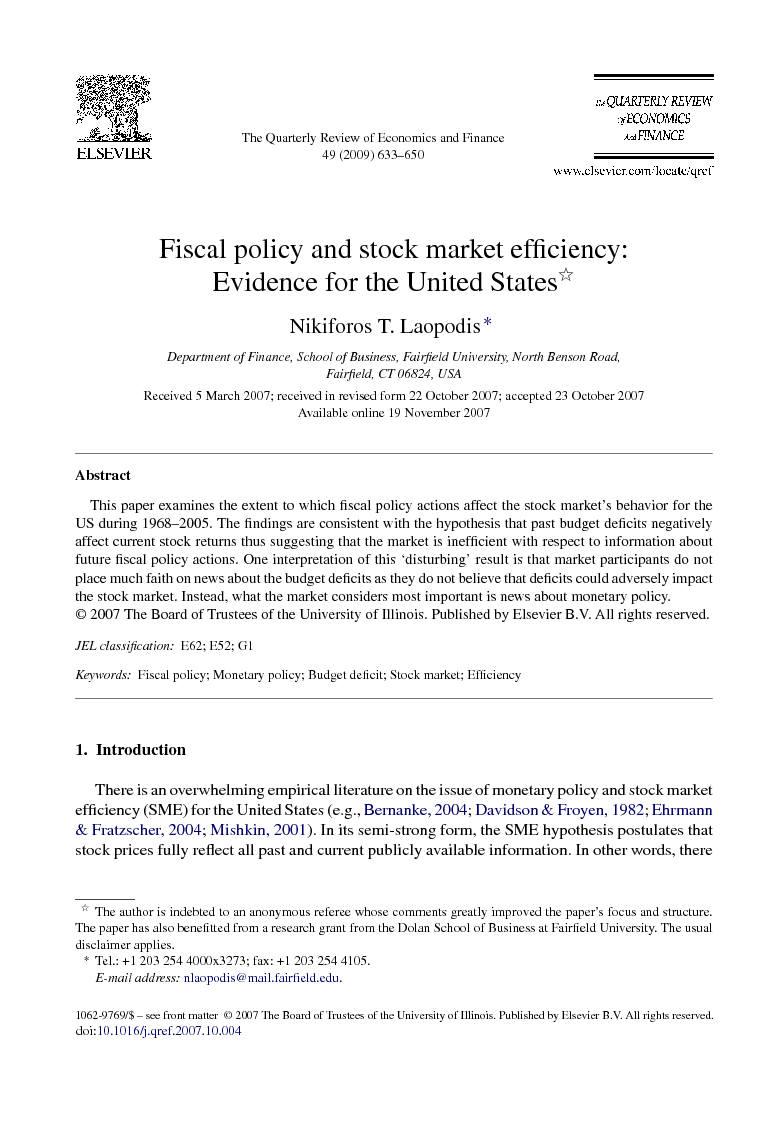 This paper examines the extent to which fiscal policy actions affect the stock market's behavior for the US during 1968–2005. The findings are consistent with the hypothesis that past budget deficits negatively affect current stock returns thus suggesting that the market is inefficient with respect to information about future fiscal policy actions. One interpretation of this ‘disturbing’ result is that market participants do not place much faith on news about the budget deficits as they do not believe that deficits could adversely impact the stock market. Instead, what the market considers most important is news about monetary policy.

In this paper, we examined empirically the extent of relationship between US fiscal policy actions and the stock market's behavior using several economic and financial factors for the 1968–2005 time period. We also examined the extent to which the US stock market was efficient with respect to the informational content of fiscal policy as it pertained to federal deficits (as percentage of industrial production). Relying on economic theory and guided by an information (or equation-selection) criterion our specified main model gave use several sensible results (as expected a priori). The empirical findings are clearly consistent with the formulated hypothesis that past budget deficits affect current stock returns in a negative and significant manner. This finding suggests that (if expected stock returns remain constant) the market is inefficient with respect to the available information about future fiscal policy actions. Additionally and most importantly, this result seems to hold even after the influences of monetary policy and other macroeconomic and financial variables are all accounted for. Finally, the negative impact of federal budget deficits surfaced as stronger since the 2000s. One interpretation of these results is that the market does not place much faith on news about the budget deficits affecting long-term interest rates which, in turn, might adversely impact upon the stock market and the economy at large. Instead, what the market considers most important is news about monetary policy. However, it is important to emphasize that excessive increases in the federal budget deficit (which emerged since the 2000s and continued to the present) may pose a serious threat to the economy in the future as investor sentiment may turn negative and undermine the global financial market's trust in the US economy.