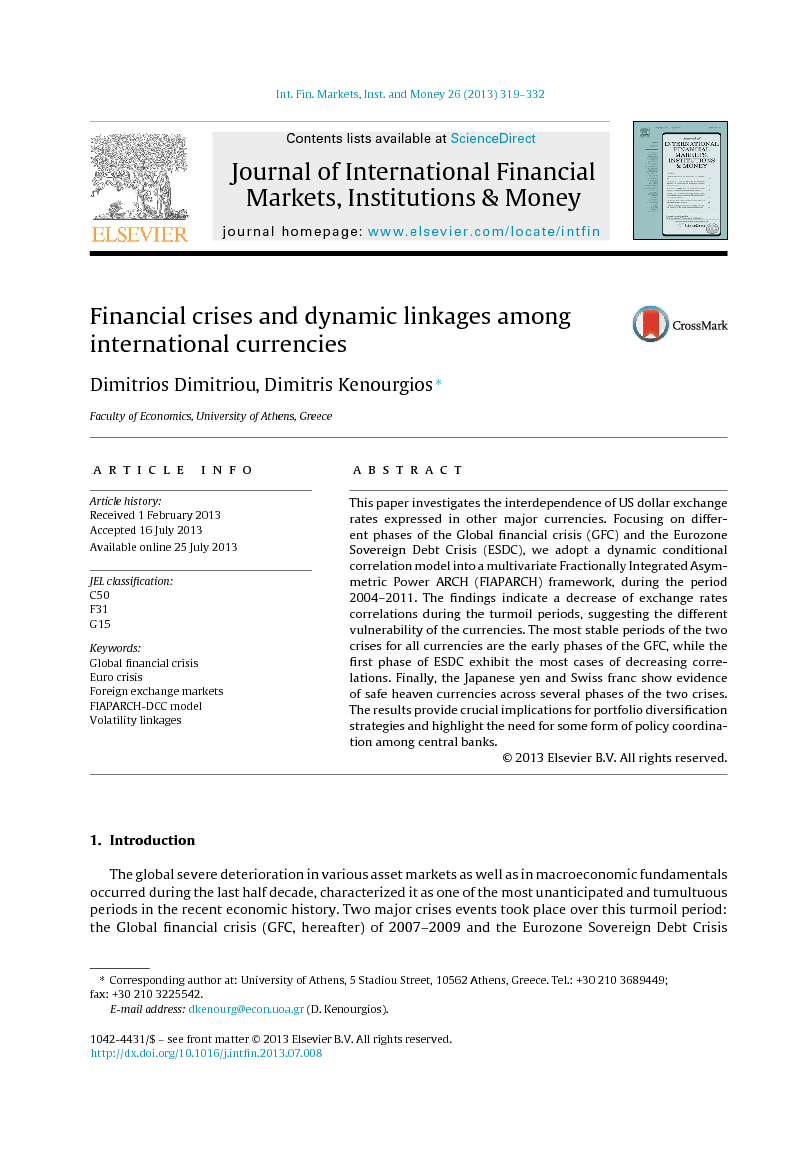 This paper investigates the interdependence of US dollar exchange rates expressed in other major currencies. Focusing on different phases of the Global financial crisis (GFC) and the Eurozone Sovereign Debt Crisis (ESDC), we adopt a dynamic conditional correlation model into a multivariate Fractionally Integrated Asymmetric Power ARCH (FIAPARCH) framework, during the period 2004–2011. The findings indicate a decrease of exchange rates correlations during the turmoil periods, suggesting the different vulnerability of the currencies. The most stable periods of the two crises for all currencies are the early phases of the GFC, while the first phase of ESDC exhibit the most cases of decreasing correlations. Finally, the Japanese yen and Swiss franc show evidence of safe heaven currencies across several phases of the two crises. The results provide crucial implications for portfolio diversification strategies and highlight the need for some form of policy coordination among central banks.

This paper examines the time-varying linkages among daily US dollar exchange rates expressed in five major international currencies, namely: EUR, JPY, CHF, GBP and AUD. Specifically, we employ a multivariate FIAPARCH(1,d,1)-DCC model, during the period from 2004 to 2011, focusing on the estimated dynamic conditional correlations among the currencies during different phases of GFC and ESDC. This procedure overcomes several limitations of the existing literature, since it investigates the second order moments dynamics of exchange rates taking into account long memory behavior, asymmetries and leverage effects. The current literature provides evidence on exchange rates co-movements and volatility spillover effects among several currencies. However, the empirical analysis either focuses on earlier periods which include the introduction of euro (e.g., Nikkinen et al., 2006, Perez-Rodriguez, 2006, Inagaki, 2007 and Antonakakis, 2012) or use high-frequency data to capture intraday volatility (e.g., Engle et al., 1990 and Kitamura, 2010) and the effects of political and risk news including earlier financial crises (Renaldo and Soderlind, 2010). On the contrary, our empirical investigation provides additional insights and several interesting findings, which contribute to both the crises literature and studies on exchange rates markets, since it analyzes the dynamic correlation patterns across the two recent financial crises. The majority of the conditional correlations among currencies decline across the different phases of the two crises, indicating their different vulnerability. The first and the second phase of GFC exhibit the most statistically insignificant correlation coefficients for all currencies, indicating that at beginning of the crisis news may be considered as a single-country case and the GFC signal has not been fully recognized. Moreover, the British pound shows the greater exposure at the beginning of the GFC, while the JPY seems to be a safe heaven currency during the second phase of the crisis. On the contrary, the only positive correlation change is observed for the pair of GBP-AUD during the third phase of the GFC, implying a currency contagion. At the fourth phase of recovery, currencies have different degrees of appreciation, indicating the end of the GFC. Across all phases of the two crises, the most cases of decreasing correlations are observed at the beginning of the ESDC. During the first phase of the Eurozone crisis, JPY, GBP and CHF have significantly negative correlations with EUR, indicating the uncertainty about the future of the Eurozone currency. At the last phase, only JPY and CHF continued to have the aforementioned behavior, implying that these currencies provided hedging benefits and could be characterized as safe heaven currencies. The results lead to important implications from investors’ and policy makers’ perspective. The decrease of exchange rates linkages during turmoil periods shows the different vulnerability of the currencies and implies an increase of portfolio diversification benefits, since holding a portfolio with diverse currencies is less subject to systematic risk. Moreover, this correlations’ behavior may be considered as evidence of non-cooperative monetary policies around the world and highlight the need for some form of policy coordination among central banks. Finally, the different patterns of dynamic linkages among major world currencies influence transnational trade flows and the activities of multinational corporations, as they create uncertainty with regard to exports and imports.