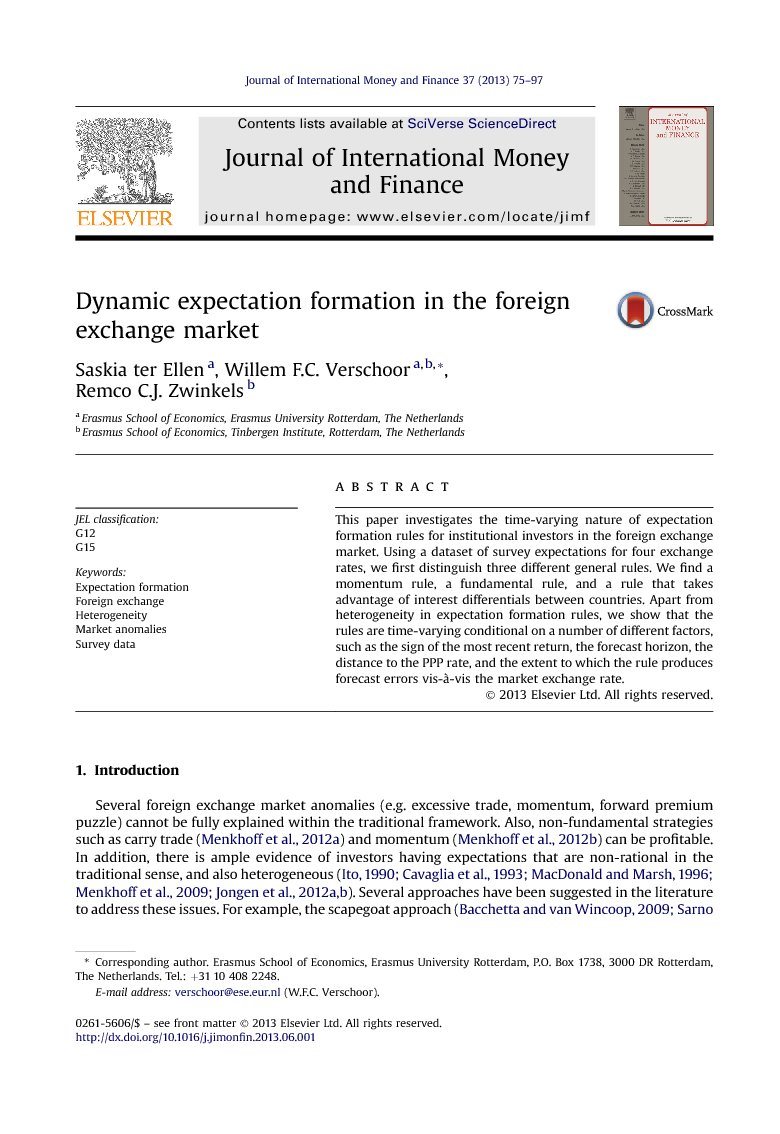 This paper investigates the time-varying nature of expectation formation rules for institutional investors in the foreign exchange market. Using a dataset of survey expectations for four exchange rates, we first distinguish three different general rules. We find a momentum rule, a fundamental rule, and a rule that takes advantage of interest differentials between countries. Apart from heterogeneity in expectation formation rules, we show that the rules are time-varying conditional on a number of different factors, such as the sign of the most recent return, the forecast horizon, the distance to the PPP rate, and the extent to which the rule produces forecast errors vis-à-vis the market exchange rate.

In this paper, we used survey expectations for four exchange rates to evaluate the way in which investors form their expectations, building on the theoretical framework of the heterogeneous agent literature. To do this, we tested three different strategies on the disaggregated expectations: momentum trading, PPP trading and interest trading strategies. The momentum rule was divided into bandwagon and contrarian expectations, and the interest trading strategy was divided into UIP and carry trade expectations. These extensions to the basic models have shown to be a valuable improvement to the models. After testing the strategies separately and in a combined model the survey expectations were evaluated to determine whether agents switch between strategies over time. We obtained significant results for all strategies when tested separately and when tested in a combined model. This implies that investors use past changes, PPP rates and interest rates in forming their expectations. Momentum trading especially occurs for short horizons, whereas PPP trading is more common for longer horizons. The interest differential is used on all horizons but primarily for long-horizon forecasting. We find indications that agents have a stronger tendency to apply a carry trade (UIP) expectation at the shorter (longer) forecast horizon. Interestingly, there are also differences in expectations within different strategies. Some people expect past trends to continue and therefore positively extrapolate past returns into future forecasts (bandwagon). Other investors expect past trends to revert. There are investors who use the interest differential as a tool for carry trade; that is, they expect an appreciation of the currency of the high-interest-rate country. There are also investors who believe in UIP and therefore expect a depreciation of the currency of the high-interest-rate country. Furthermore, a long history of positive returns seems to influence investors when forming their expectations, making them more vulnerable to bandwagon expectations. A long history of undervaluation of an exchange rate can cause a loss of faith in reversion to the fundamental value. Not only do investors use different strategies to form their expectations, they also change the weights they assign to these strategies based on the past forecasting accuracy of the strategies. The weight assigned to the extrapolative strategy decreases for longer horizons, and investors put more weight on PPP rates in this case. Investors switch more for longer forecasting horizons. Switching mainly occurs between momentum traders and PPP traders. Our results further indicate that investors have deviating ways of forming expectations for the exchange rates that involve the Japanese yen. For the momentum and the PPP rules, we found surprising results that contradict earlier works as well as our empirical findings for the other exchange rates. This might suggest that Japan can be seen as a separate case. One of the reasons for this can be that Japan is an export economy and therefore the Japanese government actively intervenes in the foreign exchange market to maintain their trading competitiveness, which makes conventional rules less useful. Further research could explore this phenomenon. The results we presented in this paper are, on the one hand, a strong confirmation of theoretical statements and empirical findings from the behavioral finance literature. On the other hand, they are also an extension to the literature, as we have shown that there is also important heterogeneity within the strategies. Future research could investigate this heterogeneity and its implications for exchange rates. It would also be interesting to see whether these findings apply to other asset classes. Furthermore, applying the model to different time periods and/or focusing on different crises could provide better insight into the effect of heterogeneity and switching on crises and vice versa.