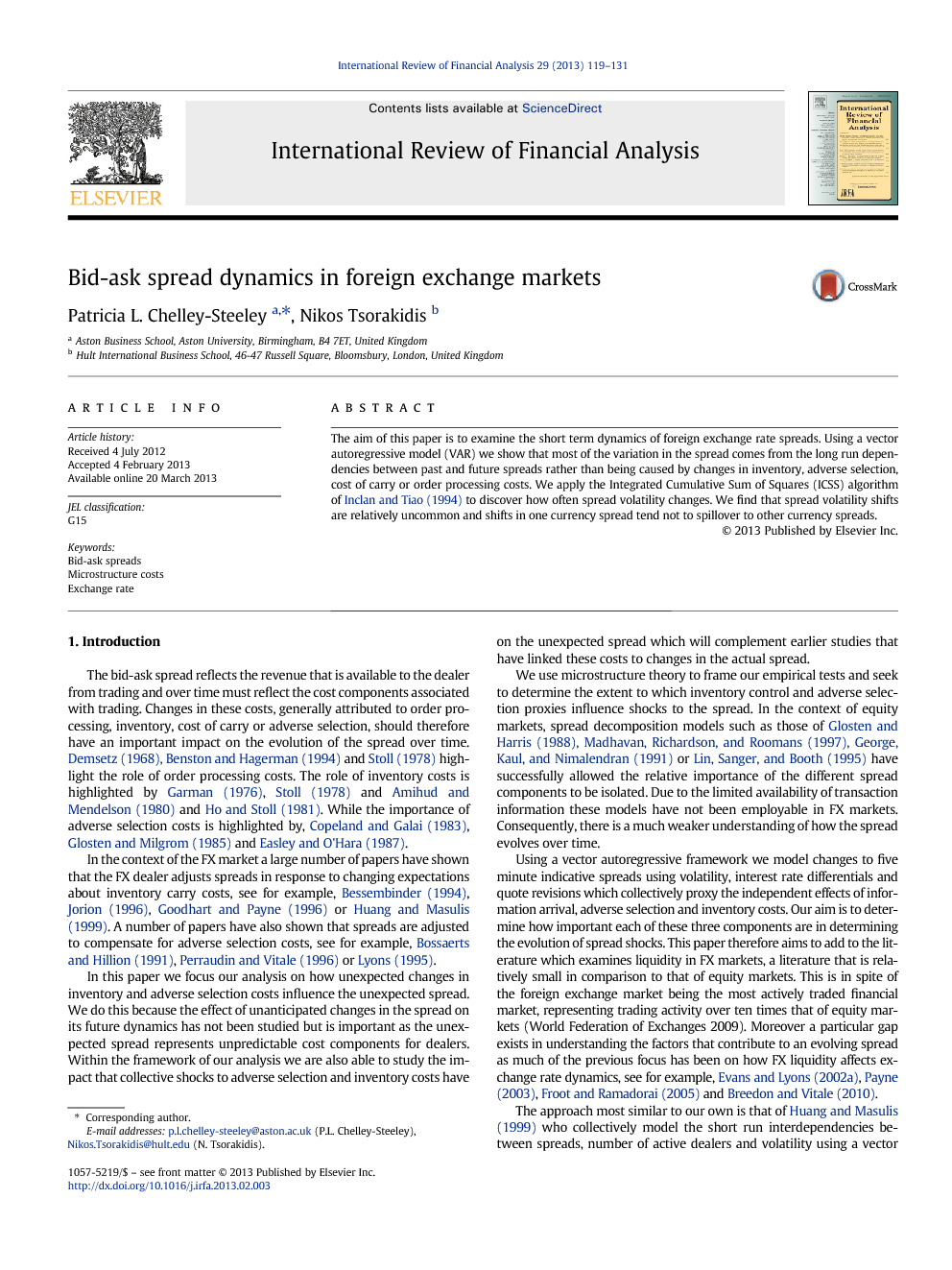 The aim of this paper is to examine the short term dynamics of foreign exchange rate spreads. Using a vector autoregressive model (VAR) we show that most of the variation in the spread comes from the long run dependencies between past and future spreads rather than being caused by changes in inventory, adverse selection, cost of carry or order processing costs. We apply the Integrated Cumulative Sum of Squares (ICSS) algorithm of Inclan and Tiao (1994) to discover how often spread volatility changes. We find that spread volatility shifts are relatively uncommon and shifts in one currency spread tend not to spillover to other currency spreads.

The bid-ask spread reflects the revenue that is available to the dealer from trading and over time must reflect the cost components associated with trading. Changes in these costs, generally attributed to order processing, inventory, cost of carry or adverse selection, should therefore have an important impact on the evolution of the spread over time. Demsetz, 1968 and Benston and Hagerman, 1994 and Stoll (1978) highlight the role of order processing costs. The role of inventory costs is highlighted by Garman (1976), Stoll (1978) and Amihud and Mendelson (1980) and Ho and Stoll (1981). While the importance of adverse selection costs is highlighted by, Copeland and Galai (1983), Glosten and Milgrom (1985) and Easley and O'Hara (1987). In the context of the FX market a large number of papers have shown that the FX dealer adjusts spreads in response to changing expectations about inventory carry costs, see for example, Bessembinder (1994), Jorion (1996), Goodhart and Payne (1996) or Huang and Masulis (1999). A number of papers have also shown that spreads are adjusted to compensate for adverse selection costs, see for example, Bossaerts and Hillion (1991), Perraudin and Vitale (1996) or Lyons (1995). In this paper we focus our analysis on how unexpected changes in inventory and adverse selection costs influence the unexpected spread. We do this because the effect of unanticipated changes in the spread on its future dynamics has not been studied but is important as the unexpected spread represents unpredictable cost components for dealers. Within the framework of our analysis we are also able to study the impact that collective shocks to adverse selection and inventory costs have on the unexpected spread which will complement earlier studies that have linked these costs to changes in the actual spread. We use microstructure theory to frame our empirical tests and seek to determine the extent to which inventory control and adverse selection proxies influence shocks to the spread. In the context of equity markets, spread decomposition models such as those of Glosten and Harris, 1988, Madhavan et al., 1997 and George et al., 1991 or Lin, Sanger, and Booth (1995) have successfully allowed the relative importance of the different spread components to be isolated. Due to the limited availability of transaction information these models have not been employable in FX markets. Consequently, there is a much weaker understanding of how the spread evolves over time. Using a vector autoregressive framework we model changes to five minute indicative spreads using volatility, interest rate differentials and quote revisions which collectively proxy the independent effects of information arrival, adverse selection and inventory costs. Our aim is to determine how important each of these three components are in determining the evolution of spread shocks. This paper therefore aims to add to the literature which examines liquidity in FX markets, a literature that is relatively small in comparison to that of equity markets. This is in spite of the foreign exchange market being the most actively traded financial market, representing trading activity over ten times that of equity markets (World Federation of Exchanges 2009). Moreover a particular gap exists in understanding the factors that contribute to an evolving spread as much of the previous focus has been on how FX liquidity affects exchange rate dynamics, see for example, Evans and Lyons (2002a), Payne (2003), Froot and Ramadorai (2005) and Breedon and Vitale (2010). The approach most similar to our own is that of Huang and Masulis (1999) who collectively model the short run interdependencies between spreads, number of active dealers and volatility using a vector autoregressive model. We also use a vector autoregressive model but focus instead on the effects that changes in the microstructure proxies have on spread innovations. We use a high frequency sample of foreign exchange quotes over a ten year period. Most previous studies of the spread have focused on relatively short periods of time, a longer period of study will allow us to abstract from short run information events that may have a short term effect on spreads. To circumvent from time of day effects, shown to be important for the spread by Huang and Masulis (1999) and Goodhart and Figliuoli (1991) we present results separately for three separate time zones. When we examine unexpected changes to the spread the VAR shows that microstructure variables within the VAR system have a small impact on explaining the variation in unexpected spreads. Variance decompositions reveal that about 90% of the variation in the spread originates from the spread itself. Impulse responses show that the largest impact on the spread is derived from prior spread shocks, the other microstructure components have only a marginal influence. We also apply the Integrated Cumulative Sum of Squares (ICSS) algorithm of Inclan and Tiao (1994) to discover more about the evolution of the relative spread. The aim of the ICSS test is to identify the number and date of any volatility shifts in a series allowing us to ascertain how changeable uncertainties in the trading costs are for each currency and whether volatility shifts in one currency spread are related to any others. We find that there are not a large number of spread volatility shifts each year, although volatility shifts in the spread do tend to cluster year to year. Most volatility shifts indicate a reduction in spread volatility but do not tend to outweigh shifts that cause a rise in volatility as although they tend to be infrequent they tend to be very large and therefore appear to be long lasting. The remainder of this paper is set out as follows. Section 2 describes the data and shows how the bid-ask spread has evolved over our sample period. Section 3 describes and motivates the use of the VAR methodology that we use. Section 4 provides the main results. Section 5 provides a summary and offers some conclusions to the paper.