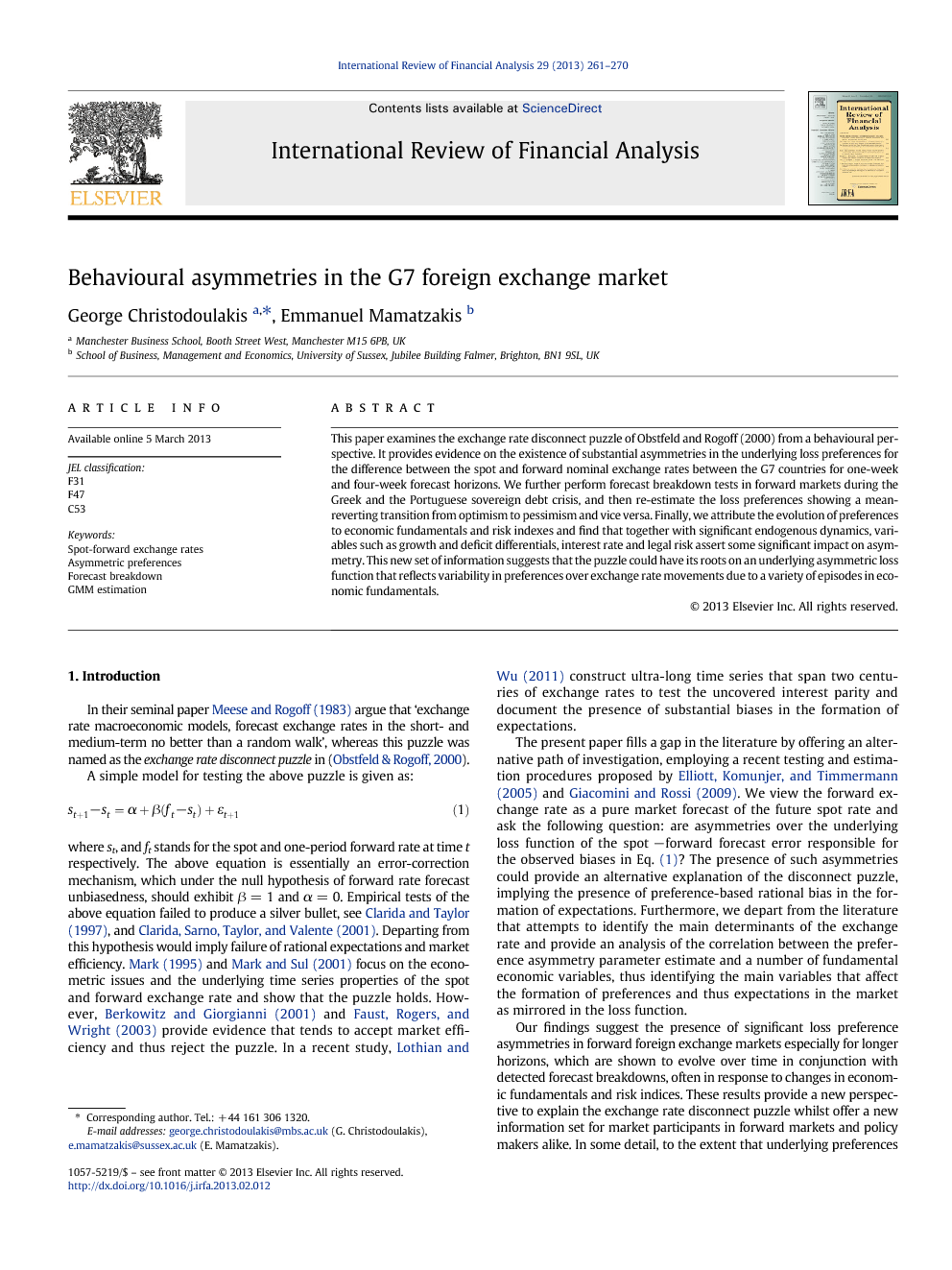 This paper examines the exchange rate disconnect puzzle of Obstfeld and Rogoff (2000) from a behavioural perspective. It provides evidence on the existence of substantial asymmetries in the underlying loss preferences for the difference between the spot and forward nominal exchange rates between the G7 countries for one-week and four-week forecast horizons. We further perform forecast breakdown tests in forward markets during the Greek and the Portuguese sovereign debt crisis, and then re-estimate the loss preferences showing a mean-reverting transition from optimism to pessimism and vice versa. Finally, we attribute the evolution of preferences to economic fundamentals and risk indexes and find that together with significant endogenous dynamics, variables such as growth and deficit differentials, interest rate and legal risk assert some significant impact on asymmetry. This new set of information suggests that the puzzle could have its roots on an underlying asymmetric loss function that reflects variability in preferences over exchange rate movements due to a variety of episodes in economic fundamentals.

In their seminal paper Meese and Rogoff (1983) argue that ‘exchange rate macroeconomic models, forecast exchange rates in the short- and medium-term no better than a random walk’, whereas this puzzle was named as the exchange rate disconnect puzzle in ( Obstfeld & Rogoff, 2000). A simple model for testing the above puzzle is given as: equation(1) st+1−st=α+β(ft−st)+εt+1st+1−st=α+βft−st+εt+1 Turn MathJax on where st, and ft stands for the spot and one-period forward rate at time t respectively. The above equation is essentially an error-correction mechanism, which under the null hypothesis of forward rate forecast unbiasedness, should exhibit β = 1 and α = 0. Empirical tests of the above equation failed to produce a silver bullet, see Clarida and Taylor (1997), and Clarida, Sarno, Taylor, and Valente (2001). Departing from this hypothesis would imply failure of rational expectations and market efficiency. Mark (1995) and Mark and Sul (2001) focus on the econometric issues and the underlying time series properties of the spot and forward exchange rate and show that the puzzle holds. However, Berkowitz and Giorgianni (2001) and Faust, Rogers, and Wright (2003) provide evidence that tends to accept market efficiency and thus reject the puzzle. In a recent study, Lothian and Wu (2011) construct ultra-long time series that span two centuries of exchange rates to test the uncovered interest parity and document the presence of substantial biases in the formation of expectations. The present paper fills a gap in the literature by offering an alternative path of investigation, employing a recent testing and estimation procedures proposed by Elliott, Komunjer, and Timmermann (2005) and Giacomini and Rossi (2009). We view the forward exchange rate as a pure market forecast of the future spot rate and ask the following question: are asymmetries over the underlying loss function of the spot − forward forecast error responsible for the observed biases in Eq. (1)? The presence of such asymmetries could provide an alternative explanation of the disconnect puzzle, implying the presence of preference-based rational bias in the formation of expectations. Furthermore, we depart from the literature that attempts to identify the main determinants of the exchange rate and provide an analysis of the correlation between the preference asymmetry parameter estimate and a number of fundamental economic variables, thus identifying the main variables that affect the formation of preferences and thus expectations in the market as mirrored in the loss function. Our findings suggest the presence of significant loss preference asymmetries in forward foreign exchange markets especially for longer horizons, which are shown to evolve over time in conjunction with detected forecast breakdowns, often in response to changes in economic fundamentals and risk indices. These results provide a new perspective to explain the exchange rate disconnect puzzle whilst offer a new information set for market participants in forward markets and policy makers alike. In some detail, to the extent that underlying preferences of forward markets are revealed and become common knowledge all participants could take advantage of this information and readjust their preferences if needed. The main reason of readjusting their preferences is that if all share the same symmetric or, indeed, asymmetric loss function this would contribute towards rationality in their behaviour. On the other hand, the absence of a common loss function could help explain why ‘exchange rate disconnect puzzle’ prevails. It might be simply the case that not all participants in forward markets share the same loss function. In Section 2 we present a brief literature review, in Section 3 we outline our methodological estimation and testing framework and in Section 4 we present our data set and empirical results on forecast breakdown and preference parameter estimation. In Section 5 we outline our analysis and results for the attribution of estimated preference parameters to economic fundamentals, and in Section 6 we conclude.

This study has been motivated by the long-established inconclusive literature questioning the efficiency of the foreign exchange market, on the basis of empirical tests reflecting symmetric preferences. We relax this assumption and allow for generalised asymmetric preferences using a newly established methodology of Elliott et al. (2005). This paper provides evidence on the existence of substantial asymmetries in the underlying loss preferences for the difference between the spot and forward nominal exchange rates between the G7 countries for one-week and four-week forecast horizons. For the full sample 2002–2012 we find that, in the context of both linear and non-linear loss functions, the underlying loss preferences for four-week-horizon data are predominantly asymmetric, whilst for one-week exchange rates asymmetry tends to weaken. Using a new test developed by Giacomini and Rossi (2009), we test for forecast breakdowns during this period. Breakdowns in forward market were observed for the Greek and the Portuguese crises, but interestingly not for the Lehman Brothers bankruptcy. This evidence provided motivation to re-estimate the loss preferences in subsamples according to the detected forecast breakdown points, leading to estimates exhibiting severe inter-temporal fluctuations of the preference parameters. The new preferences show strong mean-reverting transition from optimism to pessimism and vice versa. As a third stage analysis, we attribute the evolution of preferences to economic fundamentals and risk indexes using a dynamic panel approach of Arellano and Bover (1995) and uncover that together with significant endogenous dynamics, variables such as growth differential, interest rate and legal risk assert some significant impact on asymmetry. The reported presence of asymmetries in the underlying loss function shed new light into the disconnect puzzle, implying the presence of preference-based rational bias in the formation of expectations. The revealed asymmetries in the loss function should be taken into account in any future modelling of foreign exchange rates whilst one should also take into account that the underlying preferences do not remain stable over time but shift from optimism to pessimism and vice versa.