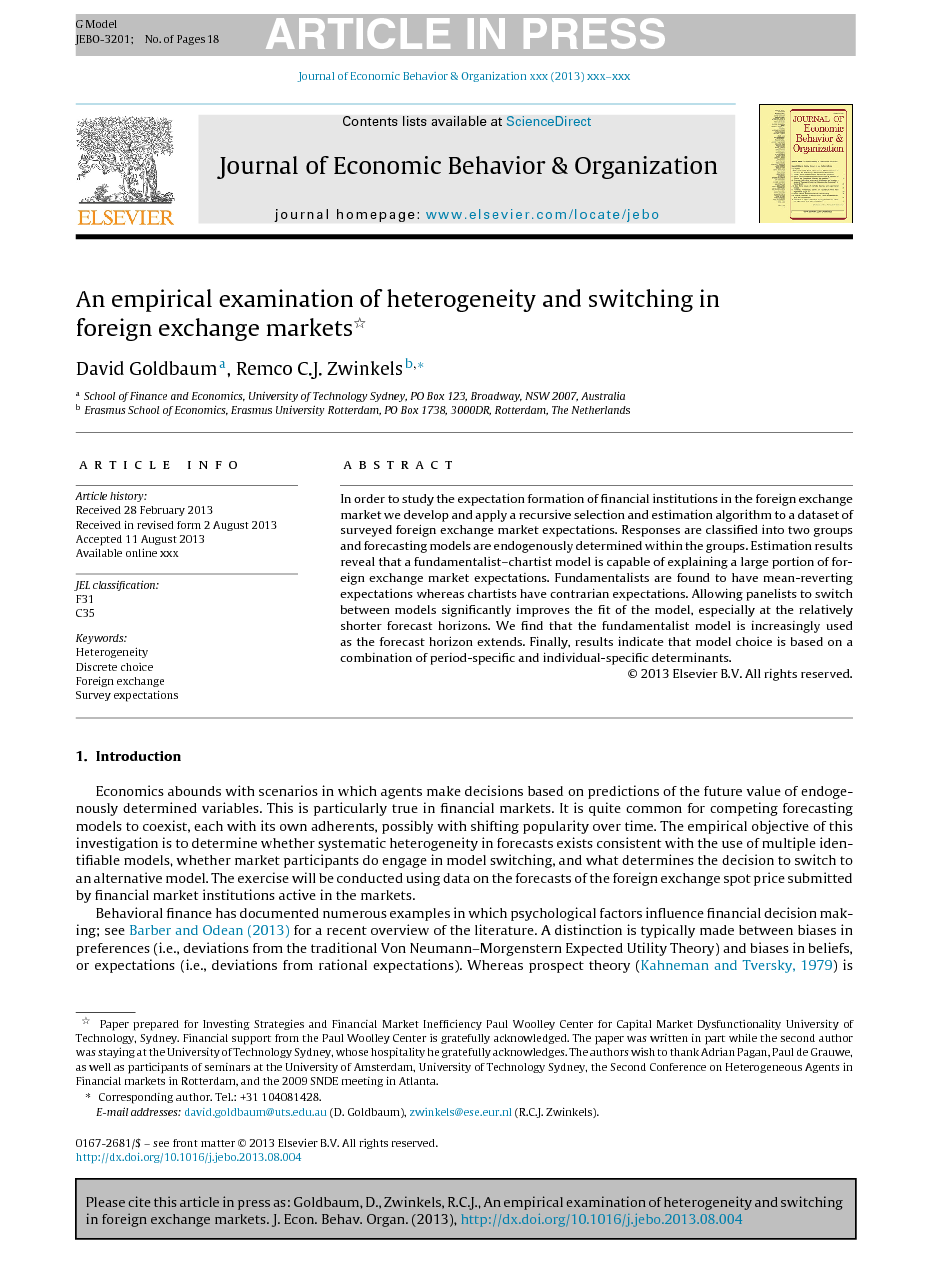 In order to study the expectation formation of financial institutions in the foreign exchange market we develop and apply a recursive selection and estimation algorithm to a dataset of surveyed foreign exchange market expectations. Responses are classified into two groups and forecasting models are endogenously determined within the groups. Estimation results reveal that a fundamentalist–chartist model is capable of explaining a large portion of foreign exchange market expectations. Fundamentalists are found to have mean-reverting expectations whereas chartists have contrarian expectations. Allowing panelists to switch between models significantly improves the fit of the model, especially at the relatively shorter forecast horizons. We find that the fundamentalist model is increasingly used as the forecast horizon extends. Finally, results indicate that model choice is based on a combination of period-specific and individual-specific determinants.

A model has been developed to examine the behavior of financial institutions when forming forecasts of future exchange rate innovations over a variety of currencies and time horizons. The model allows for market participants to switch between different strategies for forming expectations. A model based on two strategies is developed, a fundamental strategy by which predictions concerning future exchange rates are based on exchange rate fundamentals and a chartist strategy by which market based information serves as a predictor of future exchange rates. The empirical analysis suggests that the switching model is useful for explaining the heterogeneity in the forecasts of the different banking institutions that took part in the survey. Allowing the panelists to switch strategies during the sample period improved the fit of the model significantly, especially at the relatively short forecast horizons. In addition, we find that model choice is based on a combination of period specific and individual specific determinants. The former means that certain market circumstances induce panelists to choose a particular model. The latter implies that if a panelist chooses a model for one currency/horizon combination, she has the tendency to make the same choice for the other currency/horizon combinations. It provides an attractive narrative of market behavior that is consistent with stylized facts. Allen and Taylor (1990) document the use of chartist techniques among foreign exchange traders. Individual traders explain that it is not necessarily that they believe that charting captures fundamentals, but that the market can be driven by chartists since they are so plentiful in the foreign exchange markets. For this reason, it is important to include chartist tools when considering trades. Presumably, the same is true when forming predictions. The fact that forecasts of financial institutions appear to be driven, at times, by a chartist model may be a reflection of the fact that institutions believe that the market based information is informative about market innovations away from fundamentals. The results could also be considered supportive of the notion that market based information is useful for predicting fundamental innovations supported by private information not available to the modeler. The latter interpretation is consistent with Grossman and Stiglitz (1980) and other papers that argue in favor of the use of chartists techniques to extract information from the market.