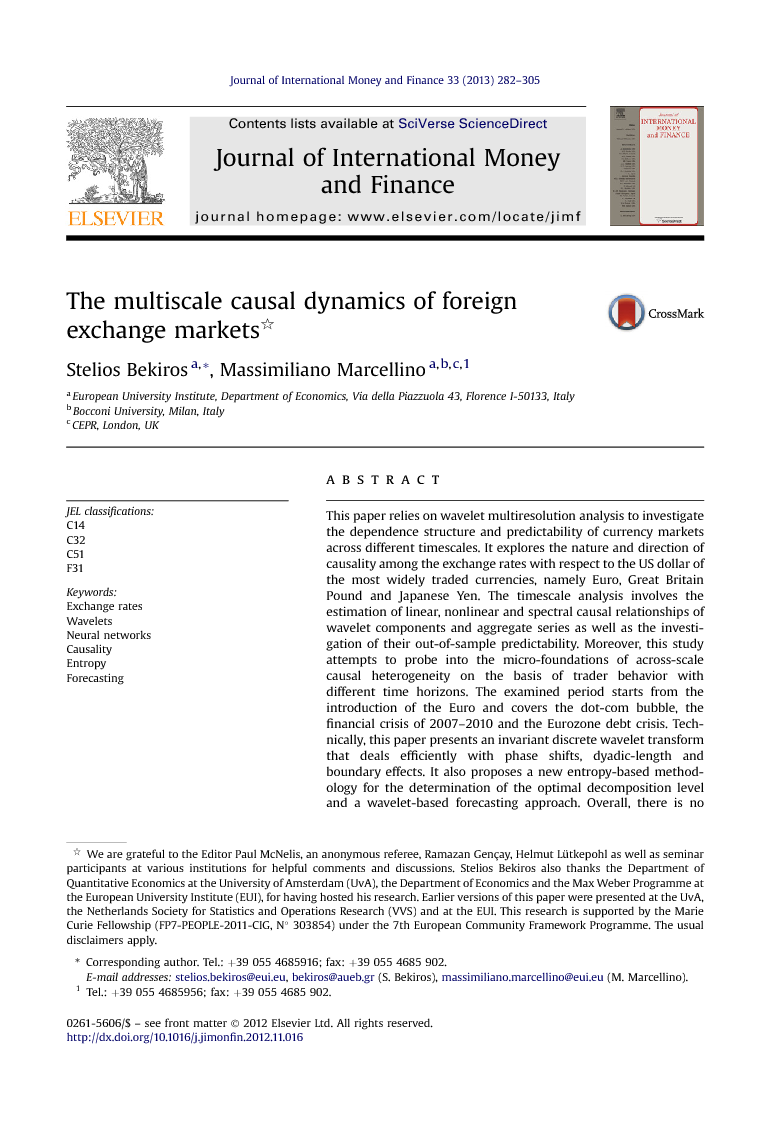 This paper relies on wavelet multiresolution analysis to investigate the dependence structure and predictability of currency markets across different timescales. It explores the nature and direction of causality among the exchange rates with respect to the US dollar of the most widely traded currencies, namely Euro, Great Britain Pound and Japanese Yen. The timescale analysis involves the estimation of linear, nonlinear and spectral causal relationships of wavelet components and aggregate series as well as the investigation of their out-of-sample predictability. Moreover, this study attempts to probe into the micro-foundations of across-scale causal heterogeneity on the basis of trader behavior with different time horizons. The examined period starts from the introduction of the Euro and covers the dot-com bubble, the financial crisis of 2007–2010 and the Eurozone debt crisis. Technically, this paper presents an invariant discrete wavelet transform that deals efficiently with phase shifts, dyadic-length and boundary effects. It also proposes a new entropy-based methodology for the determination of the optimal decomposition level and a wavelet-based forecasting approach. Overall, there is no indication of a global causal behavior that dominates at all timescales. In the out-of-sample analysis wavelets clearly outperform the random walk for the volatility series. Moreover, the synergistic application of wavelet decomposition and artificial neural networks provided with an enhanced predictability in many forecast horizons for the returns. These results may have important implications for market efficiency and predictability.

Since the pioneering work of Grossmann and Morlet (1984) wavelet methodology, a refinement of Fourier analysis, has been introduced in the literature as an alternative for analyzing nonstationary data with “irregularities”. Their contribution was followed by the development of multiresolution analysis by Mallat (1989) and the introduction of orthogonal wavelet bases by Daubechies (1992). Even though the wavelet methodology has widespread application in the natural sciences, it is a rather unexplored area in economics. The wavelet multiscale decomposition, allowing for simultaneous analysis in the time and frequency domain, could be a valuable means of exploring the complex dynamics of financial time series. In this study we use the wavelet methodology to investigate the dependence structure and predictability of currency markets at different timescales. During the Great Moderation period2 and in particular during the nineties, currency markets have grown more similar and exchange rate volatility decreased (Laopodis, 1997). More recently, the Euro behavior against the US dollar has seriously altered the prior state of market interrelations (Bénassy-Quéré and Lahrèche-Révil, 2000; Wang et al., 2007). Given the status of the US dollar and Euro as anchor currencies, it is interesting to examine the nature of the causal linkages between them, as well as with other currencies.3 The existence of causal linkages would suggest that news originating in a specific market is not country-specific and idiosyncratic, but efficiently transmitted to other foreign markets, thus providing support to the “meteor shower” notion introduced by Engle et al. (1990). However, it is necessary to go beyond linearity when examining the exchange rate linkages and their forecastability. Meese and Rogoff (1983) reported in their seminal work the failure of linear exchange rate models, whilst according to Ma and Kanas (2000) nonlinear structures may account for bubbles with self-fulfilling expectations ( Blanchard and Watson, 1982), target zone models ( Krugman, 1991), nonlinear monetary policies ( Flood and Isard, 1989) and noise trading ( Black, 1986). However, empirical studies that tested for these kinds of nonlinearities have rather failed to support them ( Lindberg and Soderlind, 1994). Hence, we need to resort to a more general framework provided by wavelet analysis. The aim of our paper is was two-fold: first to test for the existence of linear, nonlinear and spectral causal relationships among the three most heavily traded currencies (“FX majors”) denoted relative to the United States dollar (USD), namely the Euro (EUR), Great Britain Pound (GBP) and Japanese Yen (JPY),4 and then to investigate market predictability at different trading frequencies. This is implemented via the use of the wavelet methodology, which reveals the inherent dynamics across different timescales. The “palette” of causality tests includes the linear Granger test (Granger, 1969) the Baek and Brock (1992) parametric test for nonlinear dynamic causality and the frequency-domain test by Breitung and Candelon (2006). A wavelet-based forecasting methodology is used to perform an out-of-sample predictive analysis of the currency markets at various timescales. The investigated time period covers diverse regimes and “extreme” events including the rise and fall of the tech-market bubble, the financial crisis of 2007–2010 and the EU debt crisis. The paper contributes to the literature in various ways. First, rather than using several datasets at different temporal frequencies, we rely on the wavelet decomposition of daily data to analyze the dependence structure of the FX markets at different time scales. The results provide evidence of complex heterogeneous dynamics across and within different scales and strongly indicate that the interactions between FX markets have different characteristics at different horizons. Second, we attempt to probe into the micro-foundations of the detected heterogeneity across time scales, on the basis of trader behavior. We focus on the impact of the actions of long-and short-term traders, as it is plausible that they may have different time horizons for different trading decisions. Once the causality structure is identified from low-to-high frequency, this has implications for the flow of information across timescales. In one sense, this idea is just a generalization of Friedman's original concept as mentioned in Ramsey and Lampart (1998).5 The propagation characteristics of the heterogeneous-driven behavior are investigated by studying the statistical properties of the information flow across scales. Third, we introduce new practical guidelines in wavelet implementation methodology. Specifically, we propose an invariant transform that enables point-to-point comparison among all scales, contains no phase shifts, relaxes the strict assumption of a “dyadic-length” time series and deals effectively with “boundary effects”. In addition, beyond the existing practice that has utilized either economic rationale or subjective judgment in considering the appropriate “depth” of the wavelet analysis, we introduce a new entropy-based methodology to determine the optimal level of decomposition. Fourth, we propose a wavelet-based method for time series analysis and forecasting. Wavelet-based forecastability is a relatively unexplored area in the literature. This method combines invariant wavelet transformation, boundary extension, wavelet reconstruction and out-of-sample prediction. It is applied to currency markets in order to investigate predictability at various timescales and forecasting horizons. The paper develops as follows: Section 2 briefly describes the wavelet methodology and elaborates on our proposed shift-invariant discrete wavelet transform. It also proposes new practical guidelines in wavelet implementation. Section 3 describes the data and provides a preliminary statistical analysis. Section 4 presents the empirical results of the wavelet analysis of the foreign exchange rates. Section 5 studies causality among both the aggregate and wavelet-disaggregated series and presents an out-of sample forecasting exercise. Finally, Section 6 summarizes and concludes.

Multiscale wavelet decomposition could become a valuable means of exploring and forecasting the complex dynamics of economic time series, as it allows for temporal and frequency analysis at the same time. The aim of the paper was two-fold: first to test for the existence of causal relationships among the most liquid and widely traded currencies in the world, namely the EUR, GBP and JPY, and then to investigate currency predictability with a wavelet-based approach. The nature and direction of causality was investigated for each component of the raw return and volatility series corresponding to a different sampling frequency and was compared against the results of the original aggregate series. The timescale causality investigation involved the comparative examination of the aggregate versus component-based causality, of linear vis-à-vis nonlinear and spectral causality as well as of short- versus long-run linkages. Moreover, a wavelet-based forecasting methodology was applied to FX markets in order to examine predictability at different frequencies as well as at the aggregate level. This study attempted to probe into the micro-foundations of across-scale heterogeneity in the variability pattern, on the basis of trader behavior with different time horizons and information flow across time scales. The trading pattern of fundamentalists is reflected at the highest approximation wavelet scale, while at lower scales short-term traders and market makers operate. Each trader class may possess a homogeneous behavior, but the aggregate underlying market dynamics are heterogeneous due to the interaction of all trader classes at different time scales. In such a market, a low-frequency shock infiltrates through all scales, while a high-frequency shock runs out quickly and might have no impact whatsoever in the long-run dynamics. The propagation properties of this heterogeneous-driven behavior were investigated, the causality structure from low-to-high frequency was identified, and the implications for the flow of information across time scales in the FX markets were inferred. Finally, an asymmetry in volatility dependence across different time horizons was identified as an important stylized property. The across-scale causality of the various regime structures is one-way, in that a low regime variability state at low frequencies identically affected the oscillation state at higher frequencies. On the contrary, high variability at a low frequency did not necessarily entail a high volatility at higher frequencies. This result is in accordance with the empirical evidence that markets “cool off” after a shock at higher frequencies in a much shorter period than after a significant structural change. In technical terms, the present work introduced new practical guidelines for wavelet implementation and expanded the relevant literature by presenting an invariant discrete wavelet transform that contains no phase shifts, relaxes the assumption of a “dyadic-length” time series, enables multi-scale point-to-point comparison and copes effectively with “boundary effects”. Beyond the existing practice that has utilized subjective judgment or economic reasoning in estimating the appropriate “depth” of the wavelet analysis, a new entropy-based methodology was introduced for the determination of the optimal decomposition level. Additionally, a wavelet-based forecasting methodology was proposed that combined invariant wavelet transformation, boundary extension and out-of-sample prediction of the reconstructed time series. The results from causality investigation strongly indicate that interactions between currency markets have different characteristics at different timescales and that there is no “global causal behavior” that prevails at all time horizons. When the nonlinear effects are accounted for, neither FX market leads or lags the other consistently, namely the pattern of leads and lags changes over time. In particular, market participants filter information relevant to their positions as new information arrives and, at any time point, one FX market may lead the other and vice versa. Finally, it was shown that the wavelet-based approach clearly outperforms the random walk in an out-of-sample investigation for the volatility series, whilst the results for the returns are satisfactory, albeit marginally better than the benchmark in some forecast horizons. This accords with the literature that FX return series demonstrate a zero-mean reverting behavior statistically indistinguishable from the random walk. Interestingly, the synergy of the wavelets decomposition and the use of artificial neural networks provided with an enhanced predictability in many forecast horizons. In addition, the superior forecastability of the wavelets did not weaken with longer forecasting horizons, as opposed to what is usually reported in the empirical literature. This might prove to be an interesting characteristic of the wavelet-based methodology. In general, the detailed knowledge of the nature of interdependency between the currency markets and the degree of their integration at different timescales will expand the information set available to practitioners and policymakers. The enhanced predictability of the wavelet methodology could also imply that currency markets might not be efficiently priced especially during crisis periods. Overall, these results apart from offering a much better understanding of the dynamic heterogeneous relationships underlying the major currency markets may have important implications for market efficiency and predictability.