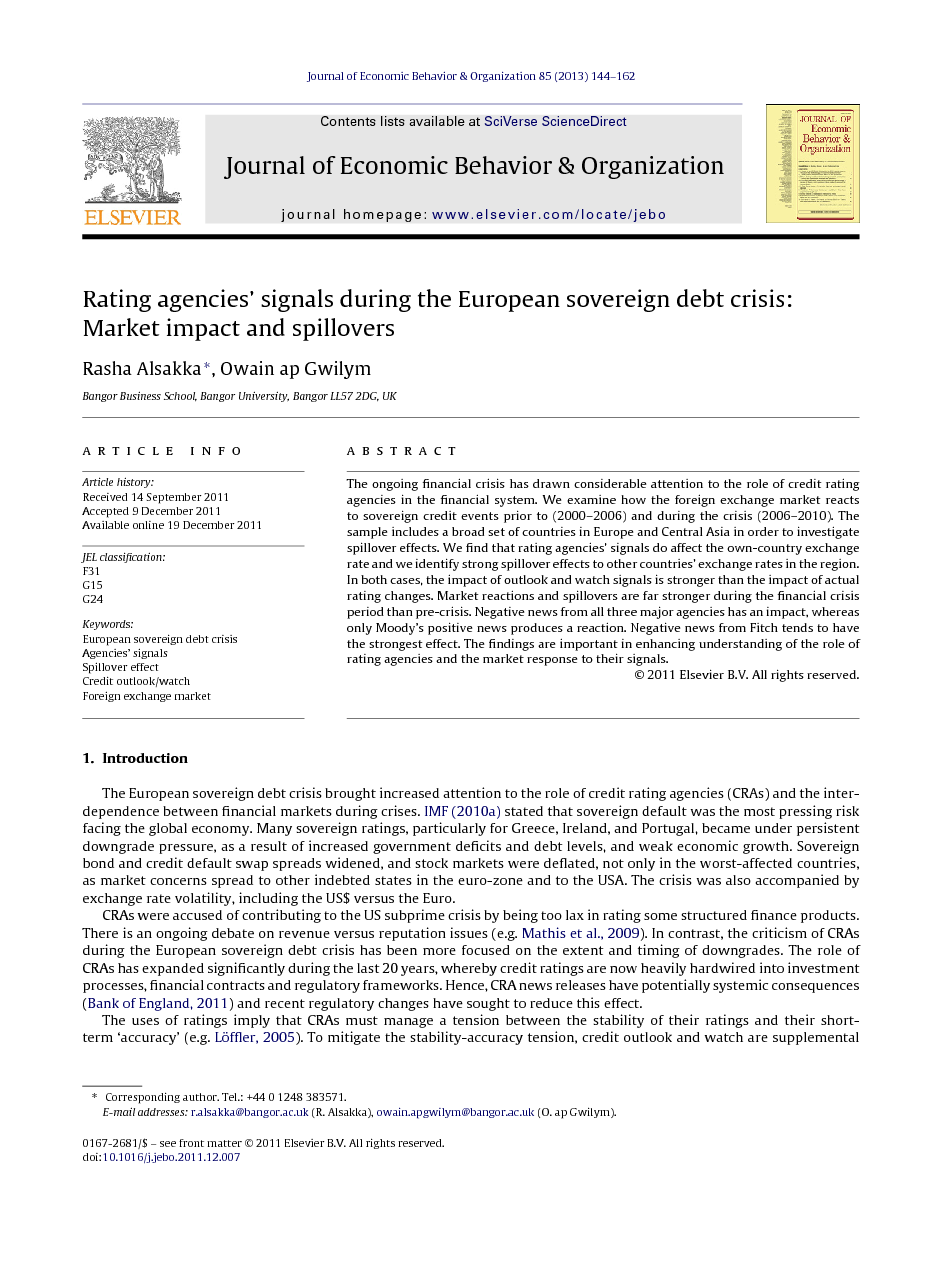 The ongoing financial crisis has drawn considerable attention to the role of credit rating agencies in the financial system. We examine how the foreign exchange market reacts to sovereign credit events prior to (2000–2006) and during the crisis (2006–2010). The sample includes a broad set of countries in Europe and Central Asia in order to investigate spillover effects. We find that rating agencies’ signals do affect the own-country exchange rate and we identify strong spillover effects to other countries’ exchange rates in the region. In both cases, the impact of outlook and watch signals is stronger than the impact of actual rating changes. Market reactions and spillovers are far stronger during the financial crisis period than pre-crisis. Negative news from all three major agencies has an impact, whereas only Moody's positive news produces a reaction. Negative news from Fitch tends to have the strongest effect. The findings are important in enhancing understanding of the role of rating agencies and the market response to their signals.

The European sovereign debt crisis brought increased attention to the role of credit rating agencies (CRAs) and the interdependence between financial markets during crises. IMF (2010a) stated that sovereign default was the most pressing risk facing the global economy. Many sovereign ratings, particularly for Greece, Ireland, and Portugal, became under persistent downgrade pressure, as a result of increased government deficits and debt levels, and weak economic growth. Sovereign bond and credit default swap spreads widened, and stock markets were deflated, not only in the worst-affected countries, as market concerns spread to other indebted states in the euro-zone and to the USA. The crisis was also accompanied by exchange rate volatility, including the US$ versus the Euro. CRAs were accused of contributing to the US subprime crisis by being too lax in rating some structured finance products. There is an ongoing debate on revenue versus reputation issues (e.g. Mathis et al., 2009). In contrast, the criticism of CRAs during the European sovereign debt crisis has been more focused on the extent and timing of downgrades. The role of CRAs has expanded significantly during the last 20 years, whereby credit ratings are now heavily hardwired into investment processes, financial contracts and regulatory frameworks. Hence, CRA news releases have potentially systemic consequences (Bank of England, 2011) and recent regulatory changes have sought to reduce this effect. The uses of ratings imply that CRAs must manage a tension between the stability of their ratings and their short-term ‘accuracy’ (e.g. Löffler, 2005). To mitigate the stability-accuracy tension, credit outlook and watch are supplemental instruments used by CRAs to signal adjustments in their opinion of issuer credit quality.1 These instruments perform an important economic function (e.g. Boot et al., 2006 and Bannier and Hirsch, 2010). Each CRA has a clear reputational goal of providing timely and high quality credit signals to financial markets. Prior studies show that outlook and watch signals are at least as important as rating changes in their market impact (e.g. Kaminsky and Schmukler, 2002, Sy, 2004, Hill and Faff, 2010 and Afonso, 2011). The IMF (2010b) stresses that CRAs influence stock and bond prices, not only by revealing new information but also through a ‘certification’ role, though this is most evident via their use of outlook and watch signals rather than rating changes. Kim and Wu (2011) provide evidence that improvements in sovereign credit quality help to encourage international bank flows from developed to emerging economies, but they point out that outlook and watch events are associated with much stronger economic effects than are rating changes. Such evidence is not surprising given that rating changes are partially anticipated in some cases since market participants are aware of the prior outlook/watch status. Sovereign ratings represent a ceiling for the ratings assigned to non-sovereign issuers within the country.2 This was particularly problematic for several Greek, Irish and Portuguese banks, since their ratings were downgraded to speculative status. In addition, sovereign ratings contribute to the smooth and efficient working of the global sovereign debt market (House of Lords, 2011). They also have a direct impact on a sovereign's cost of borrowing, and this is central to the question of whether CRA actions contributed to a worsening of the European sovereign debt crisis. This paper firstly documents the extent of sovereign rating news from Moody's Investors Service, Standard and Poor's (S&P) and Fitch during the European sovereign debt crisis. The analysis then proceeds to examine how the foreign exchange spot market reacts to sovereign credit events in the Europe and Central Asia (EU–CA) region prior to, and during this crisis. We also investigate spillover effects, i.e. the impact of a given sovereign credit signal on other countries’ exchange rates, which is a key contribution of this study. To the best of our knowledge, this paper is the first to provide evidence on how sovereign credit news affected the foreign exchange market during and immediately prior to the current financial crisis (see Section 2). We aim to identify whether sovereign credit signals released by a particular CRA have a stronger influence on the market during the crisis than the signals of other CRAs. We also add to the literature by analysing whether any influence on the market is related to a specific type of credit signal (positive versus negative events, and actual rating changes versus outlook actions versus watch signals). Prior related research has mainly centred on actual rating changes (see Section 2). We also extend the methodology previously applied in the literature on the information content of credit ratings by employing a logit-type transformation of the numerical-rating scale to account for non-linearity (see Sy, 2004). The main findings are summarised as follows. The local and spillover effects of sovereign credit news on foreign exchange markets in the ‘EU–CA’ region are stronger during the crisis period. The effect of negative sovereign credit events are most marked for higher-rated countries during the crisis period, while the impact is most marked for lower-rated countries in the pre-crisis period. During the crisis period, negative news from the three CRAs affects the own-country exchange rates and contributes to contagion. Also, positive news from Moody's affects the home currency and those of other countries. Fitch signals induce the strongest reactions during the crisis period. We also find a unique market reaction to S&P in the case of negative outlook signals during the crisis period. Overall, watch and outlook signals have much more impact than rating changes on the foreign exchange market. The rest of the paper is organised as follows. Section 2 briefly reviews the literature on the market impact of sovereign ratings. Section 3 discusses the effect of the 2007–2011 financial crisis on European economies and on CRAs. Section 4 describes the data set of sovereign credit events and foreign exchange rates. Section 5 presents the methodology used to examine the effects of sovereign credit news. Section 6 discusses the empirical results, and Section 7 concludes the paper.

During 2010–2011, concerns in global financial markets have been dominated by the European sovereign debt crisis. Also, the reform of the credit rating industry has been high on the agenda of policymakers and regulators in developed economies. We address both of these topical issues by examining how the foreign exchange spot market reacts to sovereign credit events in the Europe and Central Asia region prior to, and during this crisis. We also investigate the impact of a given sovereign credit signal on other currencies (i.e. spillover effects). We use daily observations of ratings, outlooks and watchlists of sovereigns which are rated by at least one of the three major CRAs during the pre-crisis period (September 2000 to September 2006), and the crisis period (October 2006 to July 2010). There is a downgrade trend in sovereign credit actions during the crisis period, whereas an upgrade trend existed previously. S&P tends to be the first mover in signalling negative news related to European countries and mostly assigns the lowest ratings during the crisis period. We find evidence of different practices applied by CRAs in adjusting ratings, outlook and watch status. S&P has more emphasis on short-term accuracy, while Moody's actions are consistent with greater stability. The results show that sovereign credit signals do have an impact on the foreign exchange market, yet there are differing reactions to the news from the three CRAs. Importantly, the strongest market reactions are in response to outlook and watch announcements rather than rating changes. It is evident that the effects of sovereign credit events on exchange rates are far stronger during the crisis period compared to previously. During the crisis period, negative news from the three CRAs affects the own-country exchange rates and contributes to contagion. Fitch negative signals demonstrate the strongest reactions and S&P offers uniquely informative negative outlook signals, while Moody's demonstrates an information lead for positive news. During the pre-crisis period, negative news by S&P and Fitch shows a weaker impact on markets. The exchange rates of higher-rated countries are more influenced by negative sovereign credit events during the crisis period, while rates of lower-rated countries are more influenced in the pre-crisis period. The fact that CRA news induces a market reaction, and that such news has a stronger impact in the crisis period leads to the question of whether the CRAs’ actions worsened the crisis. This view was expressed by many European politicians and commentators. Their concern is partly justified, since CRA actions have increased the pressure on the euro, and increased borrowing costs for already highly indebted economies. However, there is an element of failure to confront the underlying economic problems and of ‘shooting the messenger’ (see House of Lords, 2011). If CRAs make erroneous judgements on sovereign creditworthiness or if they frequently reverse their judgements, there would seem to be a case to answer, but neither of these issues appears to be relevant during the 2006–2010 period.