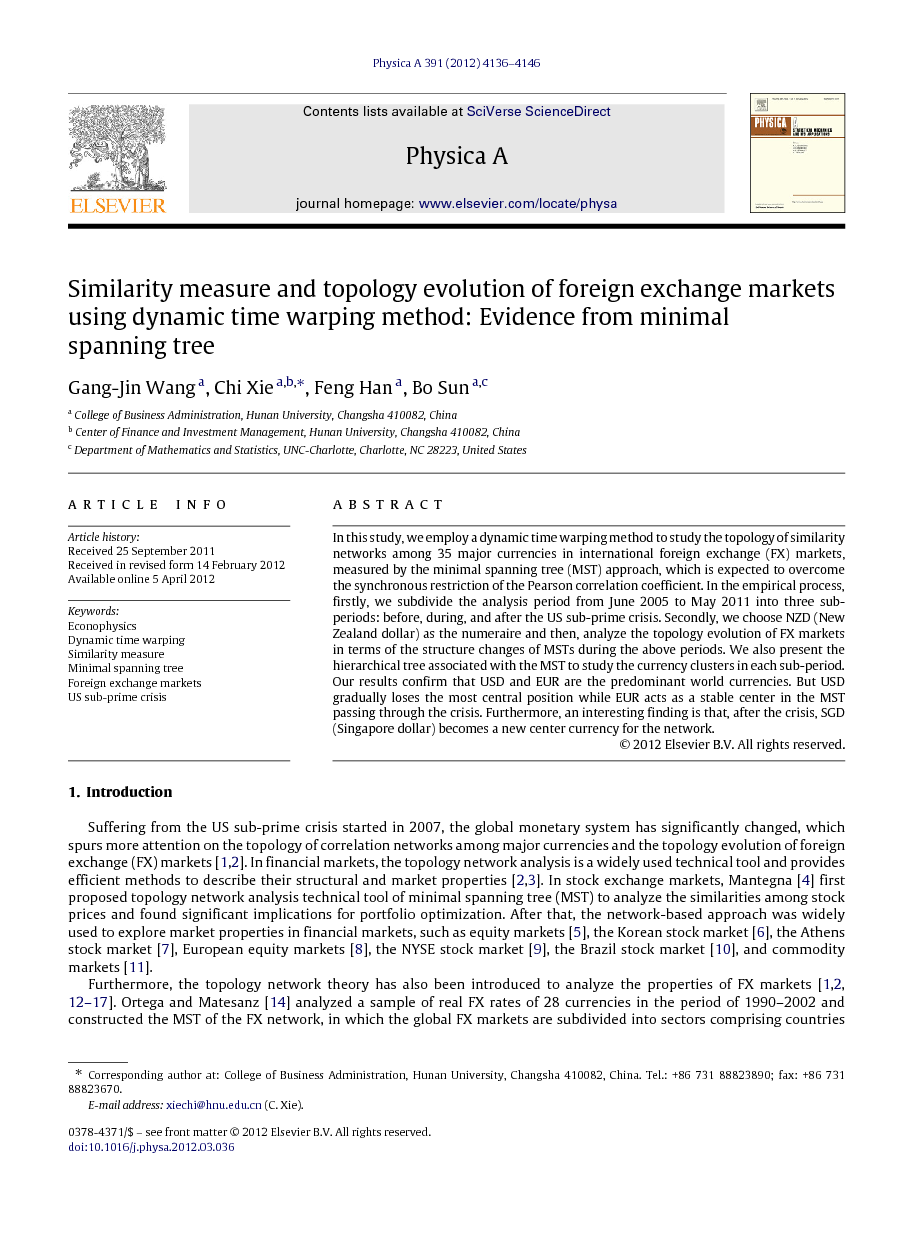 In this study, we employ a dynamic time warping method to study the topology of similarity networks among 35 major currencies in international foreign exchange (FX) markets, measured by the minimal spanning tree (MST) approach, which is expected to overcome the synchronous restriction of the Pearson correlation coefficient. In the empirical process, firstly, we subdivide the analysis period from June 2005 to May 2011 into three sub-periods: before, during, and after the US sub-prime crisis. Secondly, we choose NZD (New Zealand dollar) as the numeraire and then, analyze the topology evolution of FX markets in terms of the structure changes of MSTs during the above periods. We also present the hierarchical tree associated with the MST to study the currency clusters in each sub-period. Our results confirm that USD and EUR are the predominant world currencies. But USD gradually loses the most central position while EUR acts as a stable center in the MST passing through the crisis. Furthermore, an interesting finding is that, after the crisis, SGD (Singapore dollar) becomes a new center currency for the network.

Suffering from the US sub-prime crisis started in 2007, the global monetary system has significantly changed, which spurs more attention on the topology of correlation networks among major currencies and the topology evolution of foreign exchange (FX) markets [1] and [2]. In financial markets, the topology network analysis is a widely used technical tool and provides efficient methods to describe their structural and market properties [2] and [3]. In stock exchange markets, Mantegna [4] first proposed topology network analysis technical tool of minimal spanning tree (MST) to analyze the similarities among stock prices and found significant implications for portfolio optimization. After that, the network-based approach was widely used to explore market properties in financial markets, such as equity markets [5], the Korean stock market [6], the Athens stock market [7], European equity markets [8], the NYSE stock market [9], the Brazil stock market [10], and commodity markets [11]. Furthermore, the topology network theory has also been introduced to analyze the properties of FX markets [1], [2], [12], [13], [14], [15], [16] and [17]. Ortega and Matesanz [14] analyzed a sample of real FX rates of 28 currencies in the period of 1990–2002 and constructed the MST of the FX network, in which the global FX markets are subdivided into sectors comprising countries from the homogeneous geographical regions. Then, a similar conclusion was reached by Mizuno et al. [15] who studied FX data for 26 currencies and three metals from 1999 to 2003 and classified the currencies on the MST according to the correlation coefficients. Their results confirmed USD played a leading role in FX markets and demonstrated the existence of several other key currencies dominating regionally. Afterwards, Naylor et al. [16] investigated topology evolution of two currency networks of 44 currencies in the period of 1995–2001 and used NZD and USD as numeraires. They constructed two numeraires currency networks both by the MST, and stated that the network structure had some changes and the Southeast Asian currencies strongly coupled as a cluster during the Southeast Asian crisis period. Besides, Kwapień et al. [17] analyzed a set of FX rates of 46 currencies (including precious metals) from 1998 to 2008 and indicated that different based currencies can generate different MST structures in FX markets. They investigated the topology and temporal evolution of FX markets and concluded that the USD node slowly loses its centrality, while the EUR node has become slightly more central than before in all the network performances. More recently, Keskin et al. [1] researched the topology of correlation networks among 34 major currencies using the MST and hierarchical tree tools for the full years of 2007–2008. They used USD and Turkish new lira (TRY) as numeraires to construct the networks and showed that the clusters matched nicely with corresponding countries from the same geographical regions in the world such as Asia or Europe. Jang et al. [2] investigated the time series properties of FX markets from 1990 to 2008 in relation to the history of the currency crises based on the MST method. Their results indicated that EUR and USD had a strong negative correlation after the Southeast Asian crisis and Asian currencies and Latin American currencies moved away from the cluster center (USD) undergoing the Southeast Asian crisis and Argentine crisis, respectively. However, we can address two disadvantages in previous studies as follows. (i) The similarity measure between a pair of FX rates or individual currencies was calculated by the Pearson correlation function, but the function may not work well for non-random and strongly correlated data [2]. Besides, Zebende [18] pointed out the Pearson correlation coefficient (PCC) is not robust [19] and can be misleading if outliers are present, as in real-world data characterized by a high level of heterogeneity [7] and [20]. Moreover, the calculated time series by the PCC must have the same record lengths or be synchronous, but we cannot get the uninterrupted time series in FX markets in fact. Compared to most currencies’ FX rates, the FX rates of some currencies (e.g. EGP, KWD, SAR, and PHP) are incomplete. That is, the whole FX rates do not have the same record lengths. For details, see Table 2 in Section 2.1. (ii) The division of currency crisis periods is not very accurate in previous works. For instance in the literature [1], the analysis periods were simply divided into two full years of 2007 and 2008. However, the span of the US sub-prime crisis includes the second half of 2007 and 2008. Thus, the time span selection in Ref. [1] is not very reasonable. Therefore, the aim of the present paper is to try to overcome the above mentioned drawbacks. Many similarity measures are based on dynamic programming (DP). A representative similarity measure for time series based on DP is dynamic time warping (DTW) [21], which was first employed in speech recognition [22] and widely used in many areas [23]: sign language recognition, gestures recognition, handwriting and online signature matching, computer vision, data mining and time series clustering. The DTW model has several remarkable advantages as follows: (i) It can measure the similarity for time series with different lengths, i.e. it can be applied to the case of retractable banner. (ii) It also has good robustness in the amplitude change, migration, and noise of time series. As Mir et al. [24], we use the DTW instead of the PCC to measure similarity properties of time series in FX markets. We analyze a set of FX rates of 35 major currencies from June 2005 to May 2011, and construct the MST of the currency network to research the topology evolution of FX markets during the US sub-prime crisis. We choose this period because it contains three stages: before, during, and after the US sub-prime crisis. Also we present the hierarchical tree (HT) associated with the MST to study the currency clusters in each sub-period. The remainder of this paper is organized as follows. In the next section, we present the data set and the methodology based on DTW. In Section 3, we construct the MST of FX networks derived from the entire set of data and give the main empirical results. Finally, in Section 4 we draw some conclusions.

In summary, we investigate the time series properties of FX markets and use the dynamic time warping method to calculate the similarity measure between a pair of rates. Besides, we confirm that similarity measure DijDij does not violate the triangle inequality in our FX data. Moreover, we present the topology of similarity networks among 35 major currencies using the MST method in three periods: before, during, and after the US sub-prime crisis. After that, we analyze the topology evolution of FX markets in terms of the changes of the MSTs. Furthermore, we use the hierarchical tree to study the currency clusters in each sub-period. We find that some clusters in the MSTs and the clusters matched nicely with the geographical regions of corresponding countries in the world. As expected, our results confirm that USD and EUR are the predominant world currencies. Our result shows that the center of the Asian cluster is not very stable. Although USD becomes more central during the crisis, the whole centrality position of USD is declined after the crisis. Notably, the European cluster, with EUR at its center, is very steady, which indicates that EUR has become a more influential currency than before. Moreover, an interesting finding is that, after the crisis, SGD becomes a new central currency for the Asian region. An important contribution of our work is that we use the DTW instead of the PCC to measure similarity properties of time series in FX markets. Previous works [1], [2], [14] and [15] suggested that correlation networks could be applied to the research on an early warning system (EWS) for financial crises. Therefore, we expect our correlation networks based on the DTW will be helpful in future monetary system studies, such as the changes of MSTs’ properties, currency clusters, and currency regional. Our analysis based on the DTW method could be extended to other financial markets, such as stock markets, equity markets, and commodity markets.