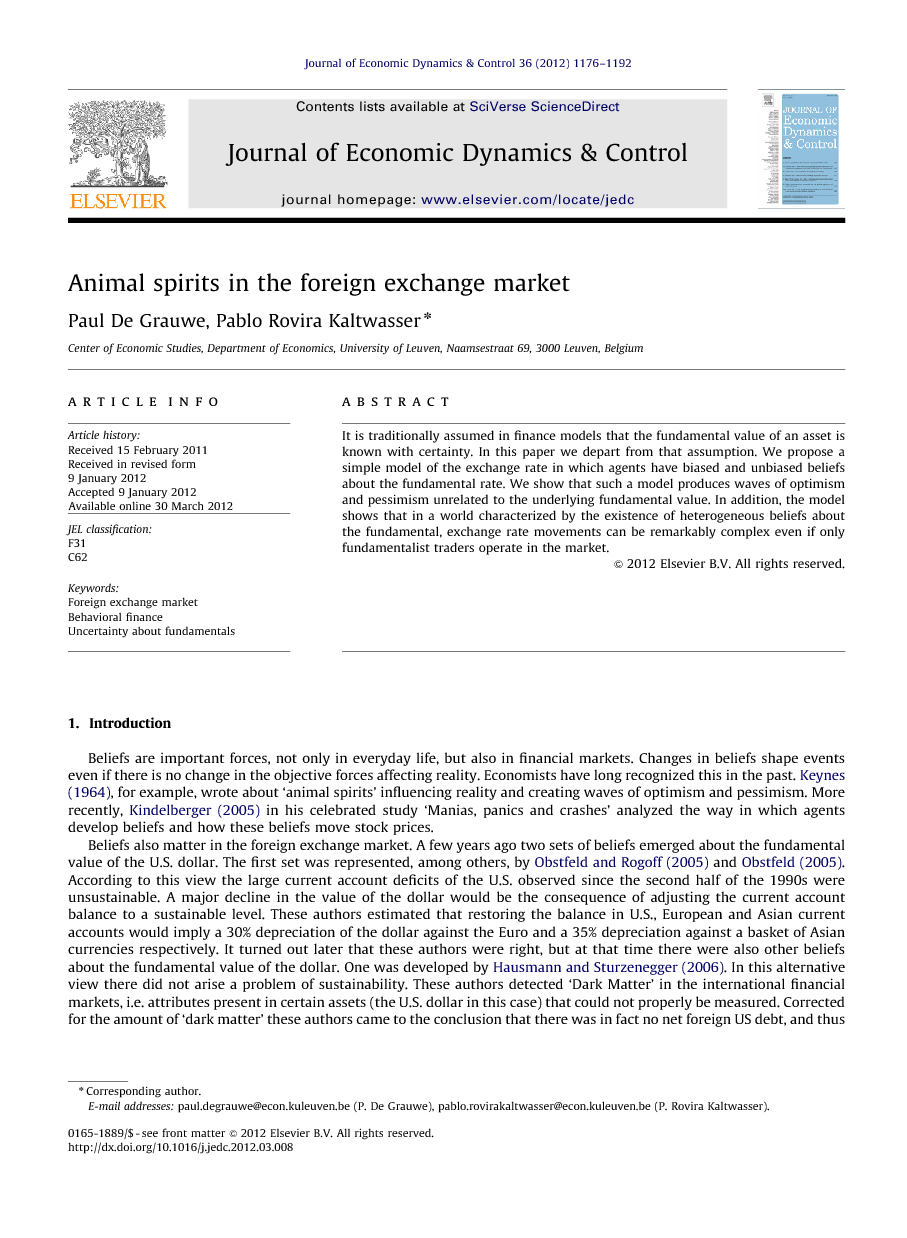 It is traditionally assumed in finance models that the fundamental value of an asset is known with certainty. In this paper we depart from that assumption. We propose a simple model of the exchange rate in which agents have biased and unbiased beliefs about the fundamental rate. We show that such a model produces waves of optimism and pessimism unrelated to the underlying fundamental value. In addition, the model shows that in a world characterized by the existence of heterogeneous beliefs about the fundamental, exchange rate movements can be remarkably complex even if only fundamentalist traders operate in the market.

In this paper we have presented a parsimonious heterogeneous agent model of the foreign exchange market. The main features of the model are that traders, who do not know the underlying value of the fundamental, form beliefs about its value. In the simplest version of the model we assumed two types of beliefs, an optimistic and a pessimistic one. Traders then switch between these two beliefs depending on how well these beliefs perform in forecasting the change in the exchange rate. Thus our model combines simple heuristics with a learning mechanism based on trial and error. We showed that this simple model generates cyclical movements of optimism and pessimism even if the fundamental does not fluctuate. These endogenous waves of optimism and pessimism are an emergent property of the model and can be interpreted as a mechanism aimed at discovering the true fundamental. We then extend the model by adding traders who have unbiased views about the fundamental exchange rate, and traders who use trend chasing (chartist) rules. Adding these rules maintains the cycles of optimism and pessimism but makes these more complex and unpredictable. The model developed in this paper assumes that the fundamental exchange rate is exogenously given. This implies that the movements in the market exchange rate do not feedback into the fundamental exchange rate. This is a simplifying assumption that in future research should be relaxed. There are reasons to believe that movements in the exchange rate also affect real variables, e.g. exports and imports, the current account and savings-investment decisions. These real effects in turn affect the fundamental value of the exchange rate. The model offers an intuitive explanation for both the disconnect and excess volatility puzzles. Additionally, it is capable of replicating the widely observed phenomenon that exchange rate returns are not normally distributed, but on the contrary exhibit fat tails. Although it is outside the scope of the present paper, our analysis allows us to make a tentative suggestion about the role of monetary policy in stabilizing (or destabilizing) the exchange rate. In an environment in which monetary policies are stable and predictable there will be less uncertainty about the underlying fundamental of the exchange rate. As a result, the belief bias will tend to be smaller, thereby reducing the power of waves of optimism and pessimism in driving the exchange rate. Obviously, more research will have to be done to analyze the importance of monetary policies in stabilizing the exchange rate. Our model is based on the assumption of bounded rationality. Findings from psychology and brain sciences suggest that there are two interacting cognitive processes at work in our brains. The first one is based on intuition and emotion and it is therefore fast and automatic. The second one is based on explicit reasoning. It can be called the rational process and it is slow and requires effort. Our model has this dual structure. Traders follow simple heuristics (e.g. extrapolating past changes), which belong to the first process. These simple rules are subject to the second, the rational evaluation process, which interacts with the first process in that it selects the rules that perform best. This dual decision making process creates remarkably complex movements of the exchange rate when implemented in a model of interacting agents. Furthermore, the interactions between traders not only lead to complex dynamics in the exchange rate, they are also key to understand the emergence of fat tailed distributed exchange rate returns.