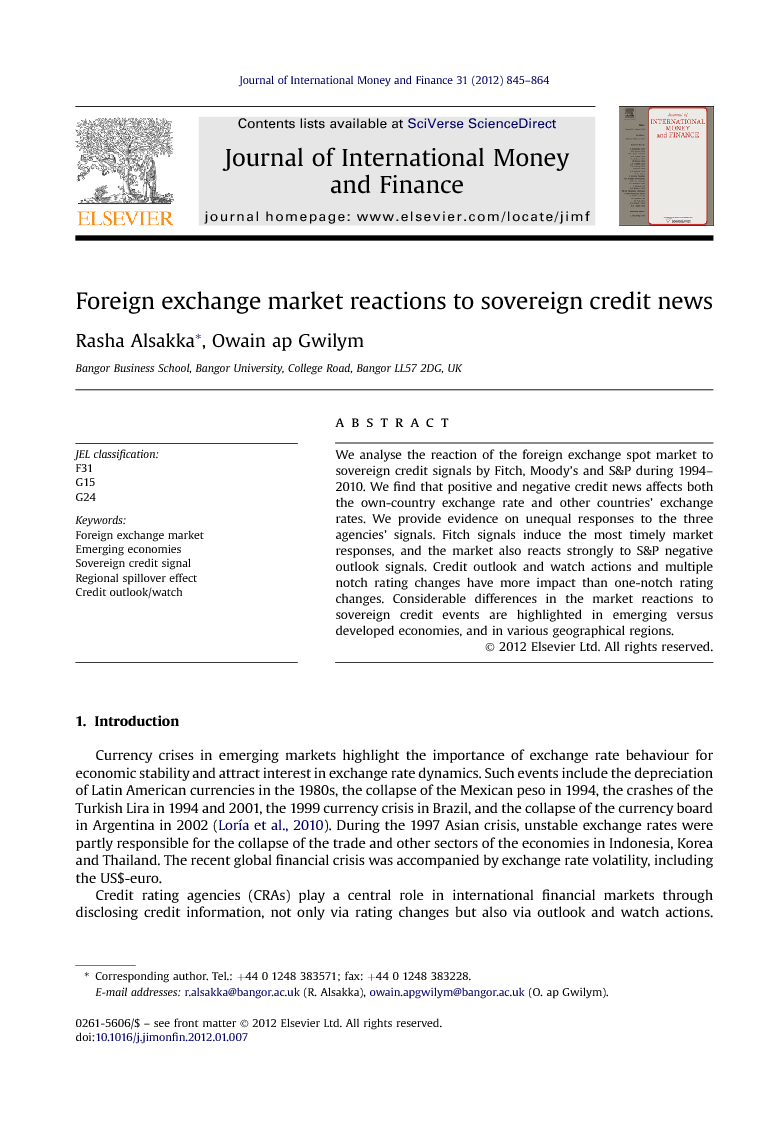 We analyse the reaction of the foreign exchange spot market to sovereign credit signals by Fitch, Moody’s and S&P during 1994–2010. We find that positive and negative credit news affects both the own-country exchange rate and other countries’ exchange rates. We provide evidence on unequal responses to the three agencies’ signals. Fitch signals induce the most timely market responses, and the market also reacts strongly to S&P negative outlook signals. Credit outlook and watch actions and multiple notch rating changes have more impact than one-notch rating changes. Considerable differences in the market reactions to sovereign credit events are highlighted in emerging versus developed economies, and in various geographical regions.

There is wide interest in empirical research on exchange rates due to their important role in global economic and financial performance. There is prior literature regarding the effects of sovereign rating changes on the bond and equity markets, but there is very little prior evidence on the impact of sovereign credit events on the dynamics of foreign exchange markets. In addition, very few studies have properly considered the relative information content of sovereign credit actions across the three major CRAs (for any financial market). This paper identifies whether any CRA demonstrates an informational lead on the basis of reactions in the own-country exchange rate and other countries’ exchange rates to sovereign credit actions. We study three types of credit signals across different economies and geographical regions. We use an extensive sample of daily sovereign ratings and credit outlook and watch assigned for 124 countries by Fitch, Moody’s and S&P during 1994–2010. We also apply a logit-type transformation of numerical rating scores to account for potential non-linearity in the rating scale. There is evidence that sovereign credit signals affect the own-country exchange rate, and that there are unequal reactions to the signals of the three CRAs. We provide some evidence on an immediate information lead in favour of Fitch relative to both Moody’s and S&P, which contrasts with evidence from stock and bond markets. We also find a unique market reaction to S&P in the case of negative outlook signals. We identify stronger market reactions to negative versus positive credit signals, and to large rating adjustments and outlook/watch announcements versus one-notch rating changes. The rating changes are, to some extent, anticipated when they are preceded by outlook or watch signals, and therefore, considering the outlook and watch status is a very important element in assessing the complete credit opinion. Importantly, and in contrast to prior studies on the information content of sovereign credit actions for bond and stock markets, we find significant responses to rating upgrades by the three CRAs and to positive watch signals by Moody’s and Fitch. The impact of credit signals varies considerably (and across CRAs) in emerging versus developed economies, as follows. (i) The effects of Moody’s downgrades and positive outlook and watch signals are only significant in emerging economies, while upgrades and negative watch signals by Moody’s are only significant in developed economies; (ii) The effects of upgrades and negative outlook actions by S&P are only significant in emerging economies, while downgrades and negative watch signals by S&P are associated with significant currency depreciation in developed economies only; and (iii) The immediate exchange rate responses for upgrades and positive watch signals by Fitch appear only in developed economies. The results show significant effects of a sovereign credit signal of one country on the exchange rates of other countries (i.e. spillover effects), and we identify inter-agency differences across regions in this case. We provide evidence of stronger responses to Fitch relative to both Moody’s and S&P in ‘LA’, as only Fitch sovereign credit events spillover to non-event currencies in ‘LA’. There is a contrast for ‘E S Asia’, where Moody’s positive events demonstrate a lead, yet negative events by both Moody’s and S&P contribute to contagion in this region. Negative signals by S&P and Fitch (not Moody’s) spillover to non-event currencies in the ‘ME-Af’ region. Finally, CRA signals significantly spillover to non-event currencies in ‘EU-CA’, with the sole exception of Fitch positive events. It is important to reflect on the inter-agency and cross-country differences which are summarised above. Several reasons can drive differential market reactions. CRAs take credit actions at different times and this will often reflect their different interpretations of the same economic, financial or political factors for a given country. Good recent examples of this are the sovereign ratings of Portugal and Ireland, which were both rated at speculative grade by Moody’s during 2011 while retaining investment grade ratings from S&P and Fitch. This also reflects the common occurrence of split ratings (i.e. CRA differences of opinion), especially for emerging markets and in crisis periods. Another factor is that a given CRA may demonstrate a consistent ‘first-mover’ advantage in certain markets or regions (e.g. Alsakka and ap Gwilym, 2010 and Alsakka and ap Gwilym, 2012). Similarly, Hill and Faff (2010) find that the ‘leading’ agency varies across economies and time periods. Reputational effects are a further aspect, whereby issuers are more likely to hire a CRA if it has a strong reputation in a specific market or region (Duff and Einig, 2009 and Hill and Faff, 2010). The strongest spillover effects are observed for the two regions which have more highly developed and integrated capital markets (‘EU-CA’ and ‘E S Asia’). For the ‘EU-CA’ region, strong spillovers within short time windows arise from Moody’s positive actions and S&P negative actions, which are both consistent with indications of ‘first-mover’ status in Alsakka and ap Gwilym, 2010 and Alsakka and ap Gwilym, 2012. The results offer an important contribution in evaluating and understanding the link between sovereign credit signals and the dynamics of exchange rates. Our evidence on the relative national and international information content of sovereign credit events by the three CRAs will interest many market participants. The findings are also particularly relevant to the credit rating industry given the expectation of increased competition in light of the recent and forthcoming regulatory changes in Europe and North America.