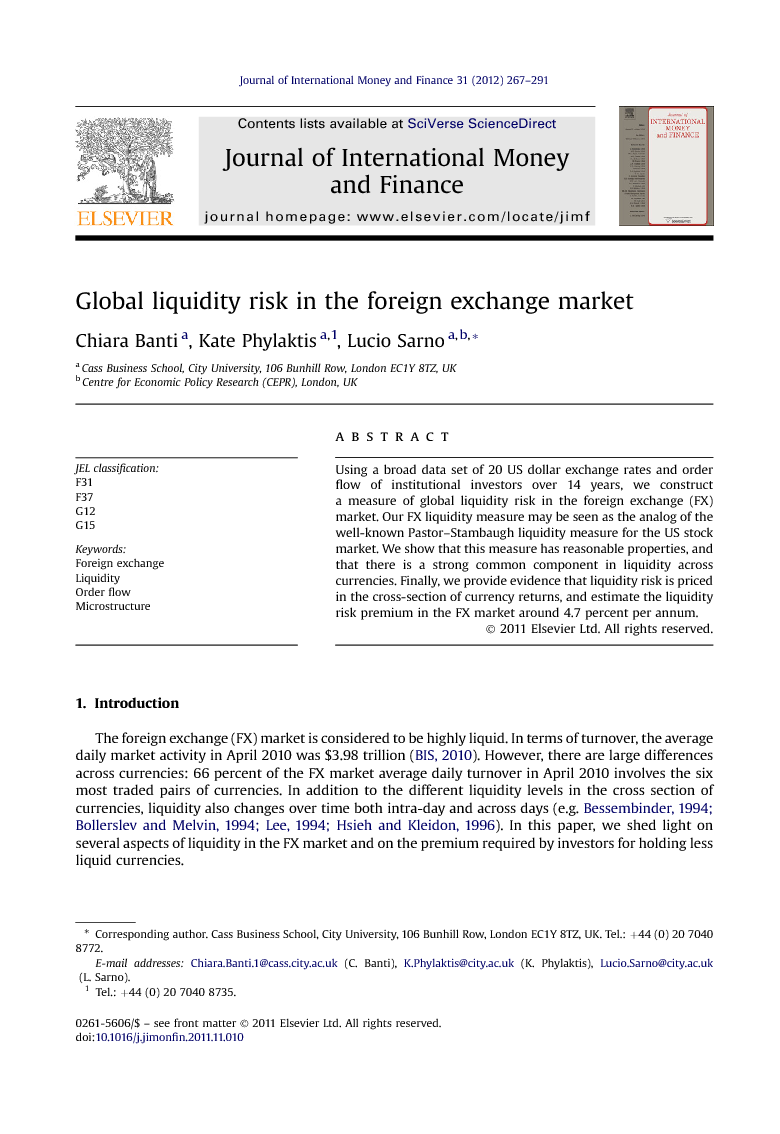 Using a broad data set of 20 US dollar exchange rates and order flow of institutional investors over 14 years, we construct a measure of global liquidity risk in the foreign exchange (FX) market. Our FX liquidity measure may be seen as the analog of the well-known Pastor–Stambaugh liquidity measure for the US stock market. We show that this measure has reasonable properties, and that there is a strong common component in liquidity across currencies. Finally, we provide evidence that liquidity risk is priced in the cross-section of currency returns, and estimate the liquidity risk premium in the FX market around 4.7 percent per annum.

The foreign exchange (FX) market is considered to be highly liquid. In terms of turnover, the average daily market activity in April 2010 was $3.98 trillion (BIS, 2010). However, there are large differences across currencies: 66 percent of the FX market average daily turnover in April 2010 involves the six most traded pairs of currencies. In addition to the different liquidity levels in the cross section of currencies, liquidity also changes over time both intra-day and across days (e.g. Bessembinder, 1994, Bollerslev and Melvin, 1994, Lee, 1994 and Hsieh and Kleidon, 1996). In this paper, we shed light on several aspects of liquidity in the FX market and on the premium required by investors for holding less liquid currencies. Using a unique data set comprising daily order flow for 20 exchange rates spanning 14 years, we build a measure of liquidity inspired by the Pastor and Stambaugh (2003) measure, which was originally developed for the US stock market. Analyzing the properties of the individual currency liquidity measures, we find that they are highly correlated, suggesting the presence of a common component across them. The presence of a common component is consistent with the notion that liquidity is largely driven by shocks that affect the FX market as a whole rather than individual currencies. We then construct a measure of innovations in global FX liquidity (unexpected liquidity) and show that it explains a sizeable share of liquidity fluctuations in individual currencies. In the stock market literature, several papers find significant co-movement of liquidity cross-sectionally (e.g. Datar et al., 1998, Chordia et al., 2000, Chordia et al., 2001, Hasbrouck and Seppi, 2001, Huberman and Halka, 2001 and Lesmond, 2005). In contrast, the FX market has received much less attention. The presence of such co-movement in the FX market during the recent crisis period is documented in Melvin and Taylor (2009) and Mancini et al. (2011). However, to our knowledge, this is the first paper to study global FX liquidity covering a long sample period which includes both crisis and non-crisis periods and drawing on the behavior of both developed and emerging market currencies, where liquidity considerations are likely to be more prominent. Next, taking the perspective of a US investor, we ask whether unexpected changes (innovations) in FX market liquidity affect exchange rate movements. In other words, we examine whether there is a systematic liquidity risk premium in the FX market.2 Estimating systematic liquidity risk as the covariance of exchange rate returns and innovations in global liquidity risk, we identify a liquidity risk premium by employing standard empirical asset pricing tests and the portfolio construction techniques first applied to FX data by Lustig and Verdelhan (2007). These methods allow us to eliminate currency-specific sources of returns by taking into account the common component of the excess returns related to systematic liquidity risk. The empirical asset pricing results suggest the presence of a statistically and economically significant risk premium associated with global FX liquidity risk, estimated to be about 4.7 percent per annum. The market price of liquidity risk stays significant even after conditioning on other common risk factors in FX asset pricing analysis, and is robust to a number of tests including alternative weighting of currencies to calculate the global liquidity measure, different rebalancing horizons, and an alternative estimation method. Finally, we find that the liquidity risk premium associated with emerging markets currencies is significantly higher than that of major currencies, and that it increased substantially after the 2008 collapse of Lehman Brothers. The paper is organized as follows. Section 2 provides an overview of the relevant literature. In Section 3 we describe the data set and provide some descriptive statistics. The methodology for the construction of the liquidity risk measure and the empirical asset pricing exercise are described in Section 4. The core empirical results are reported in Section 5, where we document the presence of a common component in liquidity across currencies, and estimate the liquidity risk premium. Section 6 contains some further analysis, including an extension of the liquidity risk definition, an analysis of liquidity risk employing two alternative liquidity measures, an investigation of currencies of emerging markets and less traded developed countries, and an additional study focusing on liquidity risk in the recent financial crisis following the Lehman Brothers collapse in September 2008. We report additional robustness checks in Section 7. Finally, Section 8 concludes.

In this paper, we study liquidity in the FX market of 20 US dollar exchange rates over 14 years using order flow data from a large custodian bank. Defining liquidity as the expected return reversal associated with order flow, the well-known Pastor–Stambaugh measure for stocks, we estimate individual currency liquidity measures. As for the stock market, we find the presence of a strong common component in liquidity across currencies, which is consistent with the literature that identifies the dealers’ inventory control constraints and preferences as significant channels influencing price formation. In other words, the dealers’ response to incoming orders of different currencies has a common part dictated by inventory considerations. Furthermore, the commonality can be explained by the need for funding liquidity on the side of traders. In this sense, changes in funding conditions affect the provision of liquidity in all the currencies in which an investor trades. The global FX liquidity measure proposed exhibits strong variation through time. Our focus in this paper is on the unexpected component in FX aggregate liquidity, or global FX liquidity risk. In this sense, the paper’s main contribution is the identification and estimation of a systematic liquidity risk premium that significantly explains part of the cross-sectional variation in FX excess returns. If there is a liquidity risk premium in the FX market, an investor will require a higher return to hold a currency more sensitive to liquidity innovations. The higher is the sensitivity of a currency to innovations in liquidity, the greater is the premium for holding that currency. Taking the perspective of a US investor, we group the currencies in four portfolios based on the historical sensitivities to the liquidity measures. Comparing the returns of the portfolios, we find that the returns are higher for the portfolios containing the more sensitive currencies. Applying standard asset pricing methods, we estimate an annualized liquidity risk premium of about 4.7 percent, which is both statistically and economically significant. We also find that liquidity risk is especially important in explaining the cross-section of emerging market currencies. Indeed, excluding the most traded currencies from the portfolio analysis, the liquidity risk premium reaches 7 percent, which is significantly higher than the one for the whole data set. Finally, employing a different proprietary data set for order flow from a large investment bank, we provide empirical evidence that the magnitude of the liquidity risk premium increased substantially after the collapse of Lehman Brothers in the recent financial crisis.