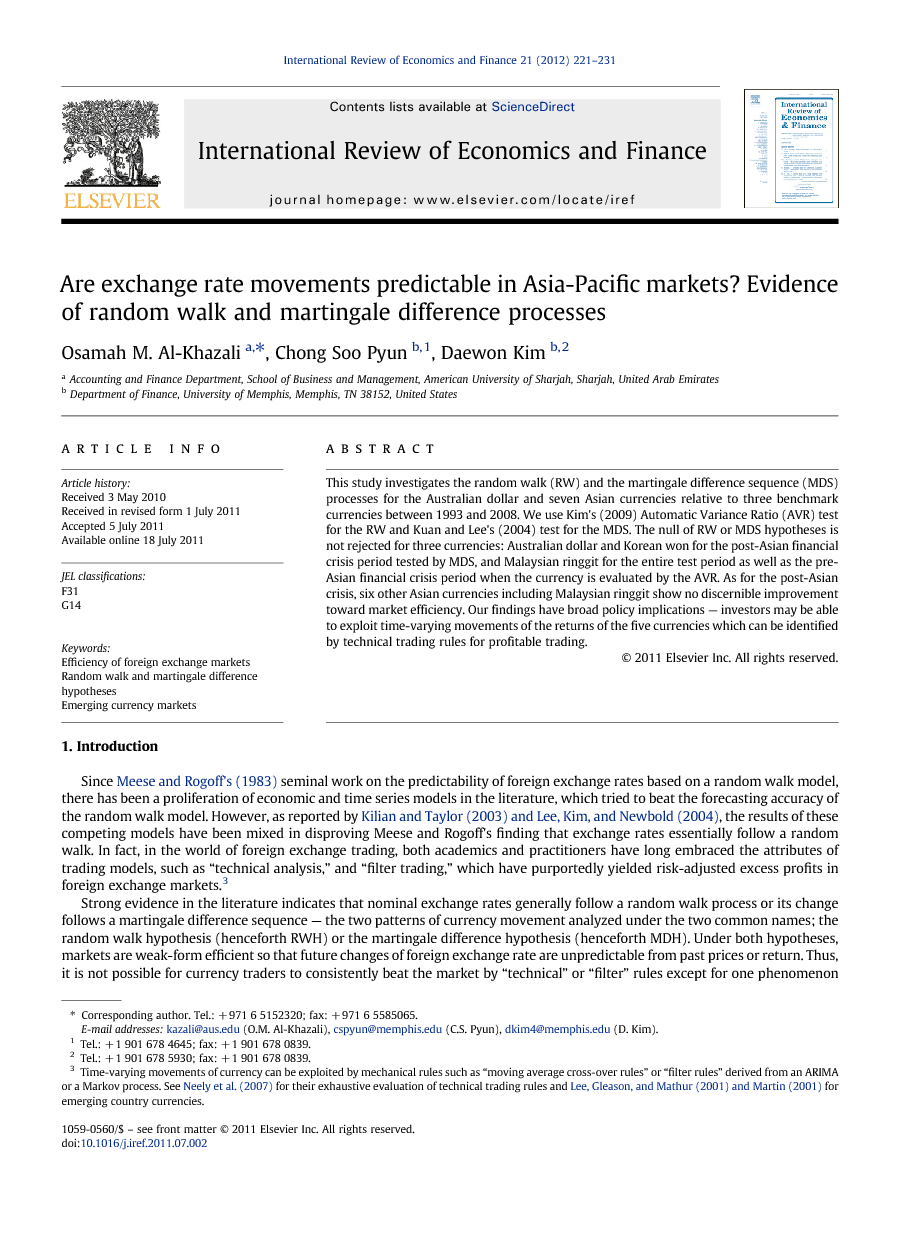 This study investigates the random walk (RW) and the martingale difference sequence (MDS) processes for the Australian dollar and seven Asian currencies relative to three benchmark currencies between 1993 and 2008. We use Kim's (2009) Automatic Variance Ratio (AVR) test for the RW and Kuan and Lee's (2004) test for the MDS. The null of RW or MDS hypotheses is not rejected for three currencies: Australian dollar and Korean won for the post-Asian financial crisis period tested by MDS, and Malaysian ringgit for the entire test period as well as the pre-Asian financial crisis period when the currency is evaluated by the AVR. As for the post-Asian crisis, six other Asian currencies including Malaysian ringgit show no discernible improvement toward market efficiency. Our findings have broad policy implications — investors may be able to exploit time-varying movements of the returns of the five currencies which can be identified by technical trading rules for profitable trading.

This paper tests the random walk hypothesis (RWH) and the martingale difference hypothesis (MDH) for the Australian dollar, the South Korean won, the Indonesian rupiah, the Malay ringgit, the Philippine peso, the Singapore dollar, the Thai baht and the Taiwan dollar under the floating rate system, in a time span bisected by the Asian financial crisis. We use Kuan and Lee's (2004) test to investigate the MDH and Kim's (2009) test to examine the RWH. Our results suggest that (i) Kuan–Lee's and Kim's tests are useful for evaluating the two hypotheses studied in this paper, (ii) only the Australian dollar and the Korean won behave as a random walk and a martingale difference since the Asian financial crisis; and (iii) the other Asian foreign exchange markets under this study have shown little discernible improvement toward weak-form efficiency following the Asian financial crisis in 1997–98. These findings are consistent with the conclusions of Ahn et al., 2002, Ryoo, 2001, Yilmaz, 2003 and Eom et al., 2008 for the Korean won in that noise trading, which may have existed, especially in the inter-bank exchange transactions, may no longer be as replicable, as the liberalization of foreign exchange rules and regulations implemented by the government of South Korea in the aftermath of the Asian financial crisis, which seems to have enhanced the overall efficiency of the won against the three world reserve currencies. Our findings in this respect are as much about the efficiency of the Korean won as they are about the countries concerted efforts in liberalizing the respective financial markets in recent years. Our findings on the Australian dollar also support those reported by Bowman (2005). While the official exchange rate regimes of the eight countries under study are a matter of public record as documented in their official homepages and various IMF publications, the manner in which their exchange regimes are actually administered has often been quite different from their official pronouncements. In particular, central bank interventions in emerging foreign exchange markets in Asia have often been pronounced. This is particularly true for the period examined in this paper during which the Euro has appreciated against the U.S. dollar, resulting in massive shifts in many Asian countries away from the U.S. dollar towards Euro-based assets. Despite these currency realignments, the evidence we obtained suggests that except for the Korean won, the other emerging foreign exchange markets in the region have not improved their efficiency when moving from pegged exchange rate systems to floating rate systems. We have evaluated the martingale process by ascertaining mean-independence or conditional-mean-independence in the second moment of a process (Dominguez and Lobato (2003). In this sense, we have affirmed the empirical validity of the assumption implicit in the “technical” or “filter” rules that returns revert to their historical or time-varying means at least for the six Asian emerging currencies, which have been on floating rate systems since the Asian financial crisis in 1998. For future research, the affirmation of the martingale processes in these Asian currencies lend strong support to a growing academic literature on the intertemporal stability of excess returns to technical trading rules in the foreign exchange markets — the intertemporal stability of excess returns which are consistent with the adaptive market hypothesis (AMH), not with the efficient market hypothesis (Lo, 2004; Neely, Weller, & Ulrich, 2007). Under the AMH, different groups of economic agents compete for profit in trading, and through competitive processes, agents deplete existing trading opportunities but learn to create new ones.