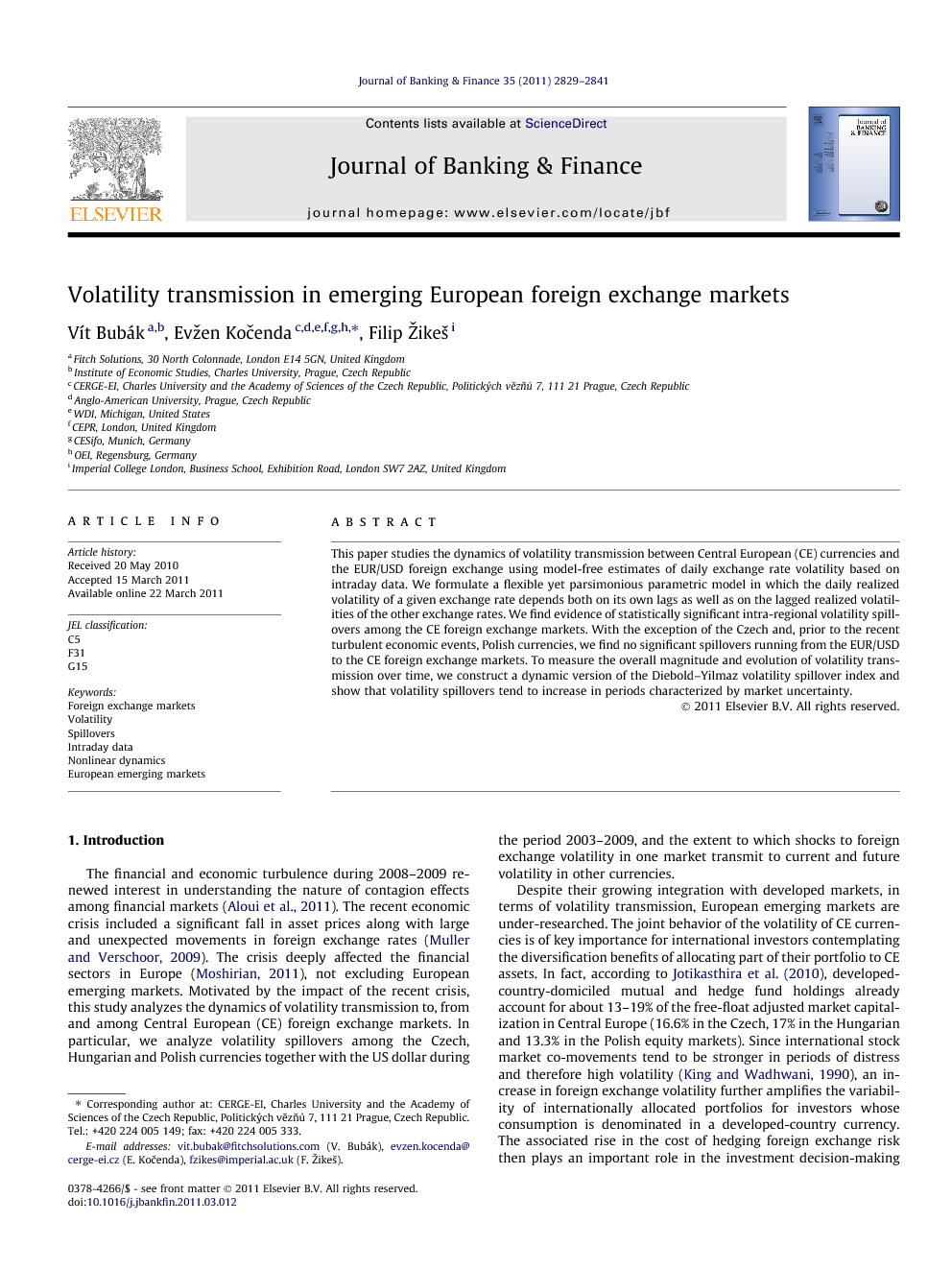 In this paper, we analyze the nature and dynamics of volatility spillovers between CE and EUR/USD foreign exchange markets. In contrast to the majority of the existing empirical literature, our work relies on model-free non-parametric measures of ex-post volatility based on high-frequency (intraday) data. We formulate a flexible yet parsimonious parametric model in which an exchange rate’s history as well as the volatilities of other exchange rates of the system realized over different time horizons drive the realized volatility of the given exchange rate. Given the multivariate framework, the model helps us study both the qualitative and quantitative repercussions of short-term and/or long-term volatility components characterizing one foreign exchange market on the evolution of another. Our empirical results document the existence of volatility spillovers between the CE foreign exchange markets on an intraday basis. We find that each CE currency has a different volatility transmission pattern. During the pre-2008 period, the histories of the Czech and Polish currencies and both the short- and long-term volatility components of the Hungarian currency as well as the long-term volatility component of EUR/USD affect the volatilities of the Czech and Polish currencies. In contrast, EUR/HUF seems generally irresponsive to any foreign component. Our finding that volatility spillovers have a greater effect on the volatility of the Czech and Polish currencies correlates with the fact that both currencies exhibit very similar and small deviations from a random walk. This contrasts with the managed regime of the Hungarian currency and its volatility being irresponsive to spillovers. During the post-2008 period our results show that volatility increased in general but the volatilities of all currencies reflect chiefly their own history. This lack of effect from neighboring markets might be a sign of isolationist sentiment on the forex markets during the global crisis. Further, using a dynamic version of the Diebold–Yilmaz spillover index we find that the magnitude of the volatility spillovers increases significantly during periods of market uncertainty. From a medium-term perspective, volatility increases for those countries with troubled financial sector development (e.g. Hungary). Finally, a general difference in the pre- and post-crisis patterns is an increase in the strength of the short-term relation, which seems to indicate a generally faster reaction of the market to volatility dynamics, especially in case of the CZK, PLN, and USD. Our results on volatility transmission augment the literature on developed foreign exchange markets and fill the void on emerging markets in Europe. Uncovered differences in volatility patterns and their drivers lend new insights into trading strategies assessed by de Zwart et al. (2009). Further, the synthesis of our findings is also relevant from the perspective of research on investment strategies as Jotikasthira et al. (2010) show that all of the three countries under research are attractive investment destinations. In further research we aim to analyze volatility transmission during the post-crisis period as new data become available.