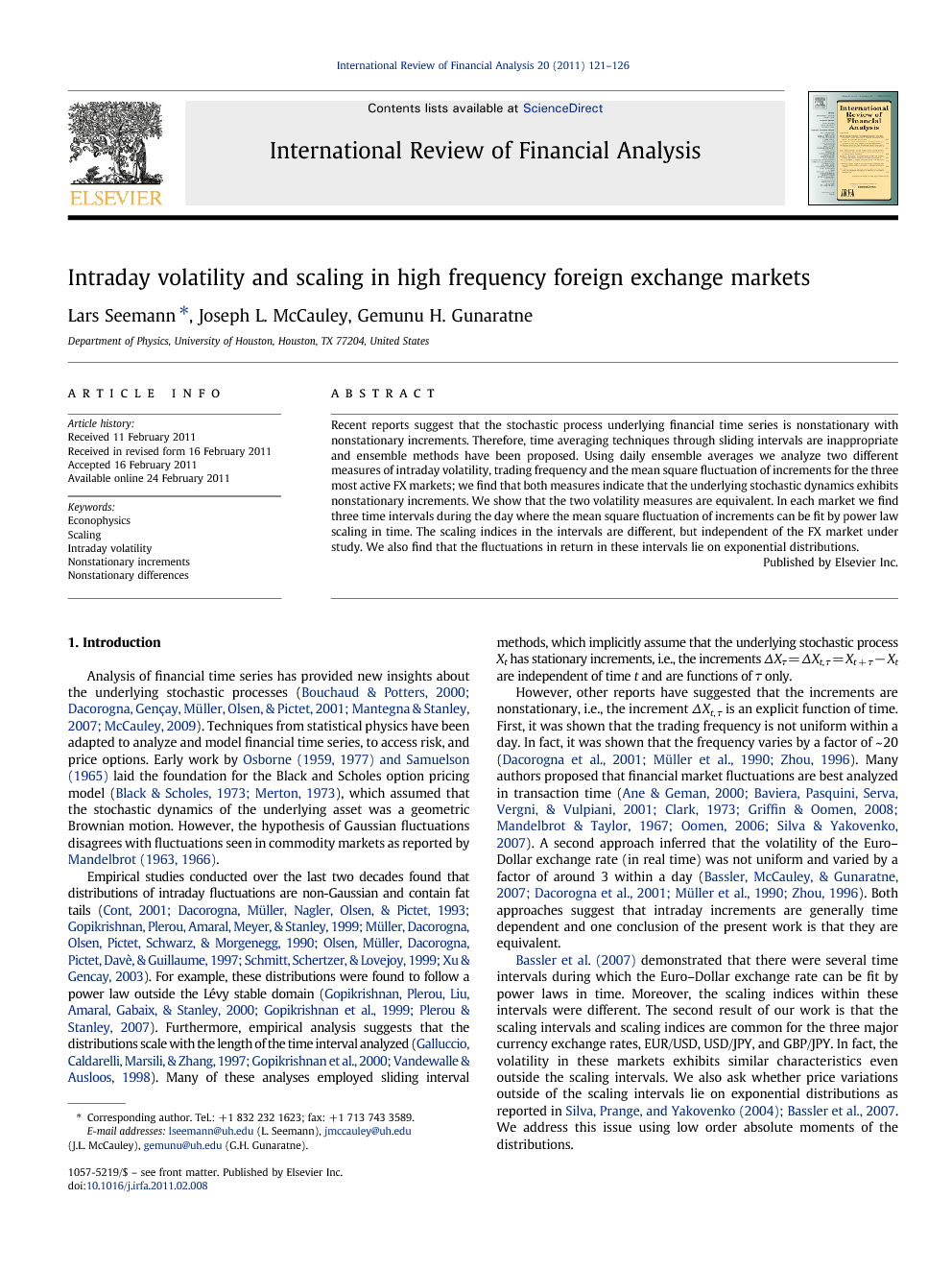 Recent reports suggest that the stochastic process underlying financial time series is nonstationary with nonstationary increments. Therefore, time averaging techniques through sliding intervals are inappropriate and ensemble methods have been proposed. Using daily ensemble averages we analyze two different measures of intraday volatility, trading frequency and the mean square fluctuation of increments for the three most active FX markets; we find that both measures indicate that the underlying stochastic dynamics exhibits nonstationary increments. We show that the two volatility measures are equivalent. In each market we find three time intervals during the day where the mean square fluctuation of increments can be fit by power law scaling in time. The scaling indices in the intervals are different, but independent of the FX market under study. We also find that the fluctuations in return in these intervals lie on exponential distributions.

FX markets can be regarded as large complex systems exhibiting stochastic behavior resulting from interactions between market participants at different levels. Properties of the resulting stochastic process can be inferred using statistical features. We analyzed two different measures of intraday volatility, trading frequency and the mean square fluctuation of increments, for the three most active FX markets and found that both measures indicate that the underlying stochastic dynamics is nonstationary. Consequently, the use of sliding interval techniques will not give an accurate characterization of the underlying stochastic process. The primary peak in Fig. 1B at 8:30 AM EST coincides with the time of announcement of important economic indicators, e.g., jobless claims, international trade. We also note that opening hours of financial institutions in the three main financial centers Asia, Europe, and North America are associated with peaks in volatility. Typically, the volatility decreases systematically following the opening. Recent studies proposed two approaches to demonstrate that the stochastic process underlying FX markets is non-stationary with nonstationary increments. Each approach assumes that the process is repeated every trading day (Dacorogna et al., 2001, Dacorogna et al., 1993, Galluccio et al., 1997, Müller et al., 1990 and Zhou, 1996). The assumption has been justified using the behavior of markets during a week (Bassler et al., 2007). The first technique relies on the variation in trading frequency during the day, and suggests the use of tick or transaction time to analyze the stochastic process. The second approach analyzes the time dependence of volatility (Dacorogna et al., 2001 and Dacorogna et al., 1993). We showed that the two approaches are equivalent during times at which financial institutions in at least one of the major trading centers (Japan, Britain, and USA) are open. Although previous studies reported the proportionality of the variance and the frequency of trades (Bouchaud et al., 2008, Plerou and Stanley, 2007 and Silva and Yakovenko, 2007), they used sliding interval techniques which do not apply for nonstationary processes. All three FX markets exhibit time intervals in the course of the day during which the volatility decays from a peak. We analyzed each scaling region for the different markets and found that the dynamical scaling indices differ from the often reported value of 0.5. The scaling indices differ between scaling intervals, but are consistent between all three markets. Earlier work by Bassler et al., 2007 and Bassler et al., 2008 found that the scaling index, or Hurst exponent, of H ≈ 0.5 can arise artificially from the use of sliding interval techniques. An additional misconception regarding H lies in the conclusion of long time correlations for View the MathML sourceH>12 like fractional Brownian motion (fBm). It has been shown that View the MathML sourceH>12 does not necessarily imply long term correlations ( Bassler et al., 2006 and Preis et al., 2007). The empirical scaling functions for each FX market and scaling interval are identical suggesting that the dynamics during the scaling intervals in all three FX markets are governed by the same underlying process. Our calculations were based on an underlying variable diffusion process, which was shown to exhibit volatility clustering (Gunaratne, Nicol, Seemann, & Torok, 2009), i.e., a slow decay of the autocorrelation function of the absolute or squared values of the time series, which is another characteristic feature of financial markets (Heyde and Leonenko, 2005 and Heyde and Yang, 1997). The scaling functions do not exhibit fat tails and are exponential, in agreement with previous work (Bassler et al., 2007, Bassler et al., 2008 and Silva et al., 2004). We further supported the finding of the bi-exponential behavior using low order moments. Our result suggests that reported fat tails might be caused by inappropriate use of sliding interval techniques since moving average procedures can not only give rise to artificial Hurst exponents but also to artificial fat tails (Bassler et al., 2007).