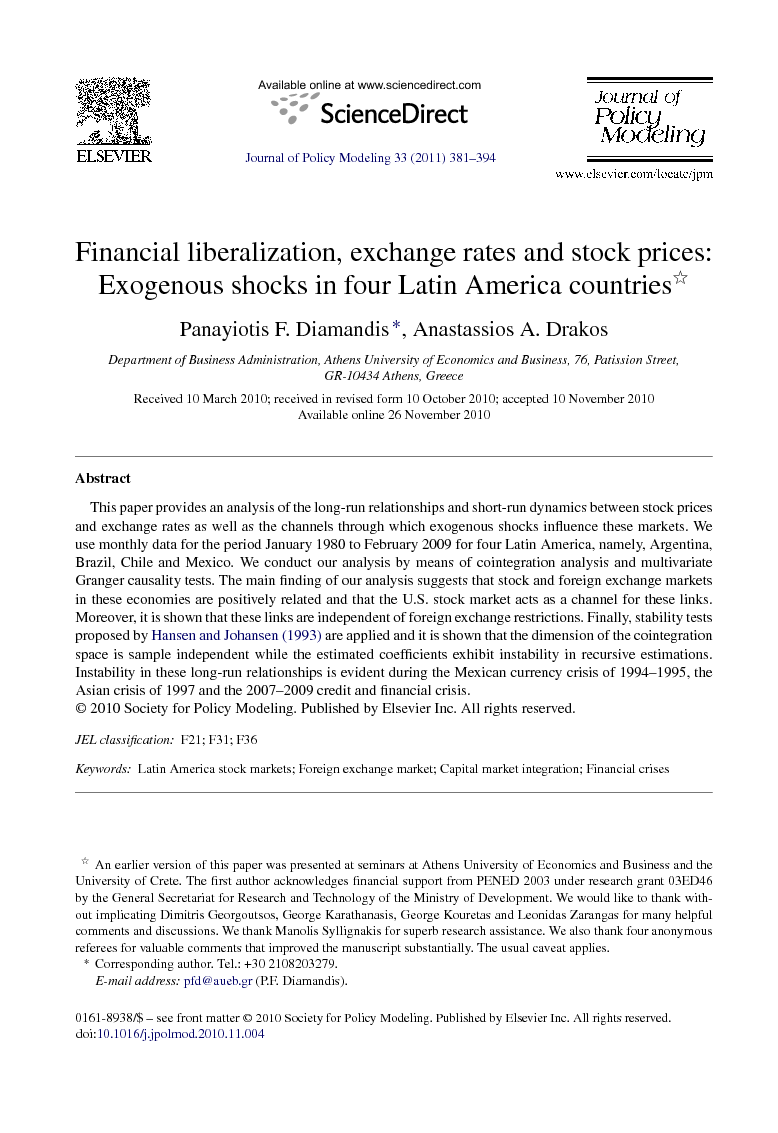 This paper provides an analysis of the long-run relationships and short-run dynamics between stock prices and exchange rates as well as the channels through which exogenous shocks influence these markets. We use monthly data for the period January 1980 to February 2009 for four Latin America, namely, Argentina, Brazil, Chile and Mexico. We conduct our analysis by means of cointegration analysis and multivariate Granger causality tests. The main finding of our analysis suggests that stock and foreign exchange markets in these economies are positively related and that the U.S. stock market acts as a channel for these links. Moreover, it is shown that these links are independent of foreign exchange restrictions. Finally, stability tests proposed by Hansen and Johansen (1993) are applied and it is shown that the dimension of the cointegration space is sample independent while the estimated coefficients exhibit instability in recursive estimations. Instability in these long-run relationships is evident during the Mexican currency crisis of 1994–1995, the Asian crisis of 1997 and the 2007–2009 credit and financial crisis.

This paper examined the long-run relationships and the short-run dynamics between stock and foreign exchange markets for Argentina, Brazil, Chile and Mexico using monthly data for the period January 1980–February 2009. There are several interesting findings stem from our analysis. First, we were unable to find a statistically significant cointegration vector in each Latin America country between the domestic stock market and its respective real exchange rate for either the 1980s or the 1990s. Second, when our VAR system was completed with the inclusion of the U.S. stock market which was taken as a proxy for the world equity markets our results were in favour of the existence of a statistically significant long-run relationship for the three variables in each case. This finding provides evidence that the U.S. stock market operates a transmission mechanism through which the domestic stock and foreign exchange markets are linked. In addition, for each emerging market the estimated coefficients of the real exchange rate and the U.S. stock market are positive suggesting a positive relationship with the respective domestic stock market. Moreover, with the use of the Hansen and Johansen (1993) recursive test for parameter constancy we showed that the identified long-run relationship is stable over time except for the case of Brazil whereas the estimated parameters for each economy exhibit instability during the period of the Mexican peso crisis but not during the Asian crisis. It also evident that around the Mexican peso crisis these linkages between the two markets were stronger confirming earlier studies on contagion effects but at the same time these events were short lived and since in mid 1995 the long-run relationships appeared to have regained its normal evolution. However, all cases exhibit instability characteristic since the end of 2007 and through the 2007–2009 financial crisis. Third, the results of the multivariate Granger causality tests indicate that the U.S. stock market drives the system of the four emerging economies which confirms the influence that the U.S. economy has on these Latin America economies. Furthermore, the causality results show that in Argentina and Brazil the link between the two markets is done through the “flow channel”, in Mexico through the “stock channel” and in Chile the markets are connected through both channels. Finally, our results indicate that financial liberalization has not been a key factor in the link either between the domestic stock and foreign exchange markets or between the domestic and the U.S. stock markets. Besides to free capital movement, access to market information is considered to be important for increasing foreign investment. The fact that Argentina, Brazil, Chile and Mexico have a substantial volume of trade with the U.S. may be a reason that independently of the degree of financial liberalization of these countries there is a significant degree of financial integration as well. The existence of interrelationships between the foreign exchange and domestic and foreign stock markets suggests that policy makers in these LACs should take it into consideration when they design their economic policy of higher degree of economic and monetary integration within the region. As it is also shown the current financial crisis has delayed such a monetary integration like the previous ones. Thus, the respective governments should take measures to complete the financial liberalization process as well as the monetary integration process. In addition given that during the financial crisis an increase in the links between stock and foreign exchange returns was recorded the policy makers as well as multinationals should take this evidence into consideration in order to ease the negative effects on the real economy as well as adopt appropriate hedging strategies against foreign exchange exposure.