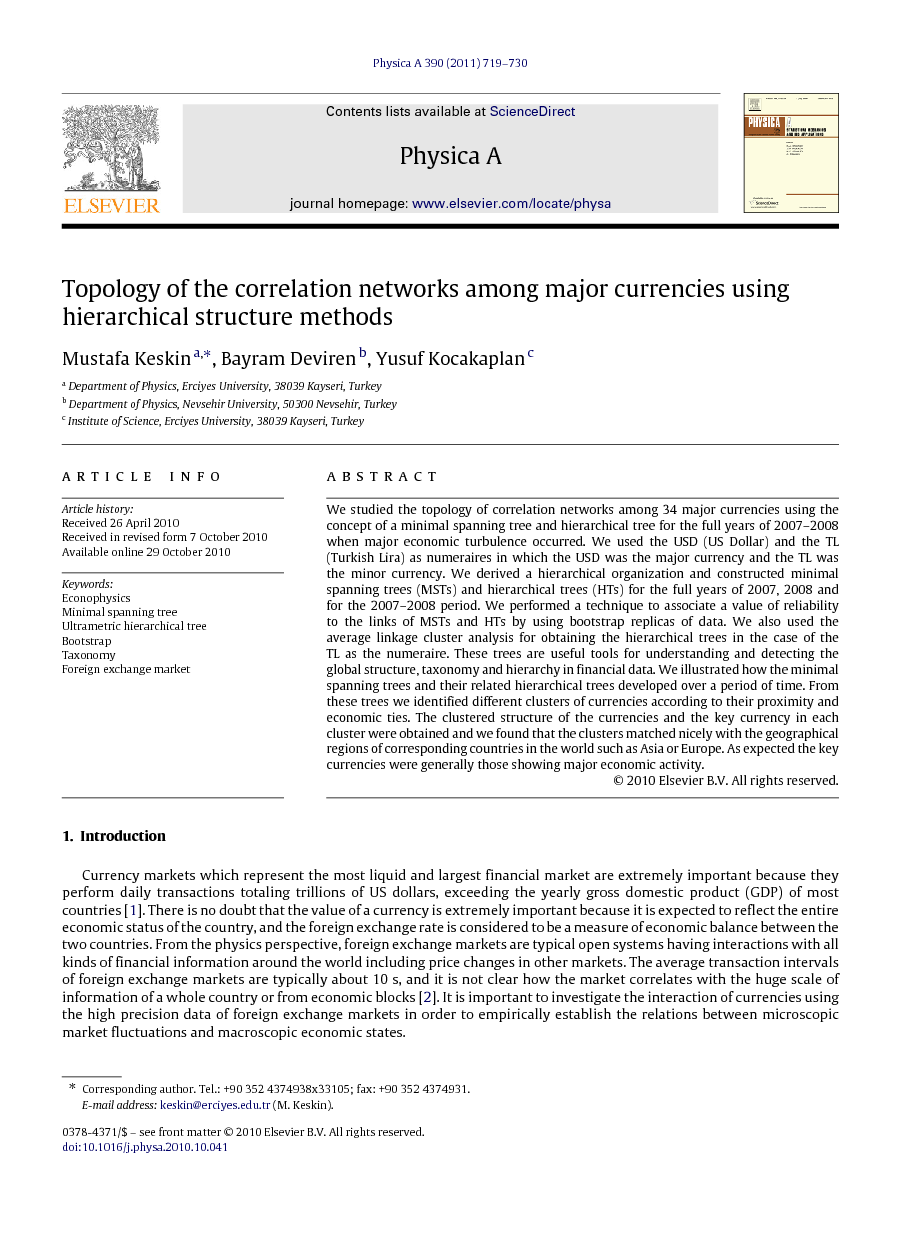 We studied the topology of correlation networks among 34 major currencies using the concept of a minimal spanning tree and hierarchical tree for the full years of 2007–2008 when major economic turbulence occurred. We used the USD (US Dollar) and the TL (Turkish Lira) as numeraires in which the USD was the major currency and the TL was the minor currency. We derived a hierarchical organization and constructed minimal spanning trees (MSTs) and hierarchical trees (HTs) for the full years of 2007, 2008 and for the 2007–2008 period. We performed a technique to associate a value of reliability to the links of MSTs and HTs by using bootstrap replicas of data. We also used the average linkage cluster analysis for obtaining the hierarchical trees in the case of the TL as the numeraire. These trees are useful tools for understanding and detecting the global structure, taxonomy and hierarchy in financial data. We illustrated how the minimal spanning trees and their related hierarchical trees developed over a period of time. From these trees we identified different clusters of currencies according to their proximity and economic ties. The clustered structure of the currencies and the key currency in each cluster were obtained and we found that the clusters matched nicely with the geographical regions of corresponding countries in the world such as Asia or Europe. As expected the key currencies were generally those showing major economic activity.

Currency markets which represent the most liquid and largest financial market are extremely important because they perform daily transactions totaling trillions of US dollars, exceeding the yearly gross domestic product (GDP) of most countries [1]. There is no doubt that the value of a currency is extremely important because it is expected to reflect the entire economic status of the country, and the foreign exchange rate is considered to be a measure of economic balance between the two countries. From the physics perspective, foreign exchange markets are typical open systems having interactions with all kinds of financial information around the world including price changes in other markets. The average transaction intervals of foreign exchange markets are typically about 10 s, and it is not clear how the market correlates with the huge scale of information of a whole country or from economic blocks [2]. It is important to investigate the interaction of currencies using the high precision data of foreign exchange markets in order to empirically establish the relations between microscopic market fluctuations and macroscopic economic states. One of the problems in foreign exchange research is that currencies are priced against each other so no independent numeraire exists. Any currency chosen as a numeraire will be excluded from the results, yet its intrinsic patterns can indirectly affect overall patterns. There is no standard solution to this issue or a standard numeraire candidate. Gold was considered, but rejected due to its high volatility. This is an important problem as different numeraires will give different results if strong multidimensional cross-correlations are present. Different bases can also generate different tree structures. The inclusion or exclusion of currencies from the sample can also give different results. This implies that we should take all major currencies and improper emphasis should not be placed on any particular MST result. Resulting robustness should also be checked by comparison with other methods or samples [3]. In the present paper, using the concepts of minimal spanning tree (MST) and hierarchical tree (HT), we analyzed the topology of thirty-four major currencies, which were generally free floating and had either market dominance or represented a region covering the data period from January 4, 2007 to December 31, 2008. We choose this period because major economic turbulence occurred during this period. For example, at the beginning of 2007 (02.01.2007), the parity of the USD–TL was about 1.406, falling to 1.215 on 15.10.2007, and reaching its lowest value at the end of the year (31.12.2007) at 1.1703. At the beginning of 2008 (02.01.2008), the parity was about 1.1708, but it increased to 1.5394 due to economic turbulences on 31.12.2008. Data were provided from the Pacific Exchange Rate Service [4]. We use the USD and TL as numeraires. The USD was a major currency, and the TL was a minor currency. We also performed the bootstrap technique [5] to associate a value of reliability to the links of MSTs and HTs. Finally, we used the average linkage cluster analysis [5] and [6] for obtaining the hierarchical trees in the case of the TL as the numeraire. The MST and HT provided a useful guide for determining underlying economic or regional causal connections in individual currencies. They also show the interconnection among currencies, detecting clusters and taxonomic relations in foreign exchange markets. These trees, introduced by Mantegna [7], and Mantegna and Stanley [8], have been applied to analyze currency markets [2], [9] and [10], especially to find clustered structure of currencies and the key currency in each cluster [2] and [3] and to resolve contagion in a currency crisis [9] and [10]. These trees are also used to study the clustering behavior of individual stocks within a single country, for example, usually the USA [11], [12], [13], [14] and [15], Korea and the USA [16], Italy [17] and [18], Greece [19], and also in Turkey [20]. The concept of the MST and the HT is also used to examine the extent and evolution of interdependence between world equity markets [21] and [22], European equity markets [23] and commodity markets [24]. Finally, we should also mention that a variety of dynamic MST analysis has also been developed and applied to the time-varying behavior of stocks in Refs. [25], [26], [27], [28], [29] and [30]. The outline of the remaining part of this paper is organized as follows. In Section 2, we briefly introduce the MST, ultrametric distance and the HT constructed from the Pearson correlation coefficient. In Section 3 the data are described. Numerical results and discussion are presented in Section 4, followed by a brief conclusion.