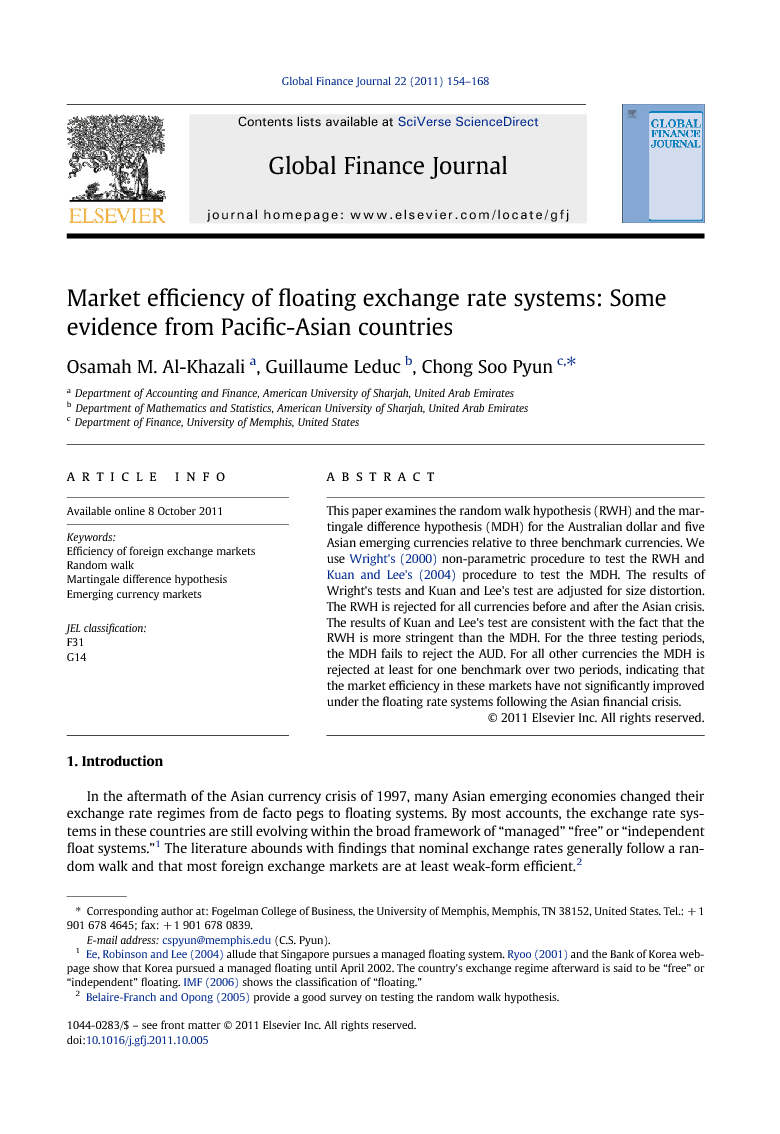 This paper examines the random walk hypothesis (RWH) and the martingale difference hypothesis (MDH) for the Australian dollar and five Asian emerging currencies relative to three benchmark currencies. We use Wright's (2000) non-parametric procedure to test the RWH and Kuan and Lee's (2004) procedure to test the MDH. The results of Wright's tests and Kuan and Lee's test are adjusted for size distortion. The RWH is rejected for all currencies before and after the Asian crisis. The results of Kuan and Lee's test are consistent with the fact that the RWH is more stringent than the MDH. For the three testing periods, the MDH fails to reject the AUD. For all other currencies the MDH is rejected at least for one benchmark over two periods, indicating that the market efficiency in these markets have not significantly improved under the floating rate systems following the Asian financial crisis.

Our study tests the random walk and the martingale difference hypotheses for the Australian dollar and five Asian currencies – the Korean won, the Malay ringgit, the Singapore dollar, the Thai baht and the Taiwan dollar – in a time span bisected by the Asian financial crisis. We use Wright's (2000) non-parametric test to investigate the RWH and Kuan and Lee's (2004) test to investigate the MDH. The results of Wright's tests and Kuan and Lee's test are adjusted for size distortion. On balance, the RWH is rejected for all currencies before and after the Asian crisis. However, in market efficiency the RWH is more stringent than the MDH, and the results of Kuan and Lee's test reflect this. During the three periods, the MDH – and therefore weak-form efficiency – fails to be rejected for the AUD. However, for the other currencies, MDH and weak-form efficiency are rejected, at least for one benchmark over two periods. On balance, these findings are consistent with the conclusions of Ahn et al., 2002 and Ryoo, 2001 for the Korean won and Bowman (2005) for the Australian dollar. Under an efficient asset pricing model, “noise traders” cannot beat the market and reap abnormal profits. However, Ahn et al. (2002) demonstrate that noise trading is active and profitable in the Korean won, and that the Korean currency has been both inefficient before and after the Asian crisis. Central bank interventions in emerging foreign exchange markets have often been pronounced. This is particularly true for the period examined in this paper, during which the Euro has appreciated remarkably against the US dollar, resulting in massive shifts in many Asian countries away from the US dollar towards Euro-based assets. Despite these currency realignments and the purported changes in the exchange rate systems since the Asian financial crisis, the evidence we have obtained in this study suggests that the emerging Asian foreign exchange markets have not improved their efficiency under the floating rate regime. With the recent growth in offshore non-deliverable forward and option markets in many Asian currencies, an evaluation of the relative inter-country exchange efficiency seems a promising topic for future research.