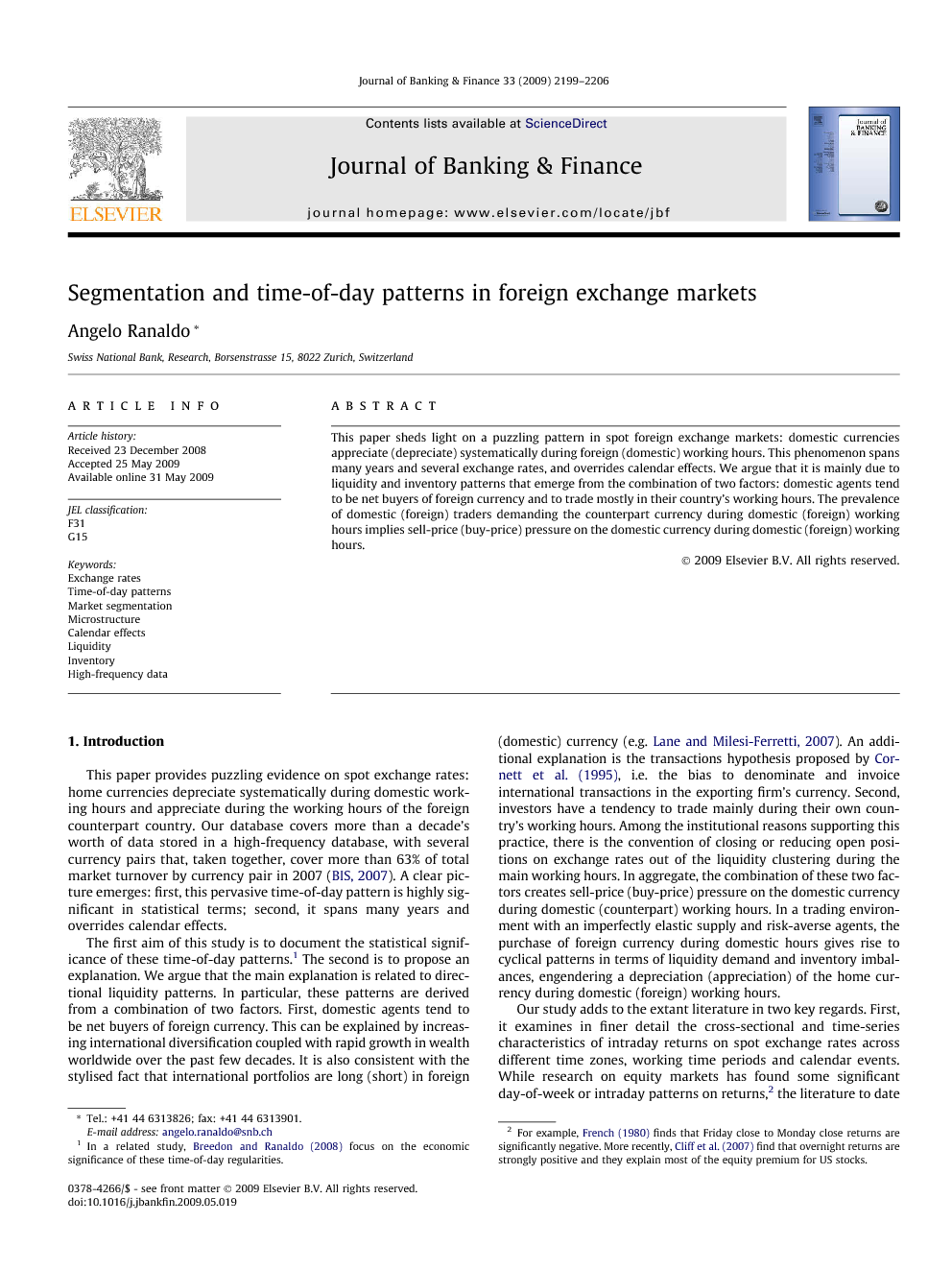 This paper provides puzzling evidence on spot exchange rates: home currencies depreciate systematically during domestic working hours and appreciate during the working hours of the foreign counterpart country. Our database covers more than a decade’s worth of data stored in a high-frequency database, with several currency pairs that, taken together, cover more than 63% of total market turnover by currency pair in 2007 (BIS, 2007). A clear picture emerges: first, this pervasive time-of-day pattern is highly significant in statistical terms; second, it spans many years and overrides calendar effects. The first aim of this study is to document the statistical significance of these time-of-day patterns.1 The second is to propose an explanation. We argue that the main explanation is related to directional liquidity patterns. In particular, these patterns are derived from a combination of two factors. First, domestic agents tend to be net buyers of foreign currency. This can be explained by increasing international diversification coupled with rapid growth in wealth worldwide over the past few decades. It is also consistent with the stylised fact that international portfolios are long (short) in foreign (domestic) currency (e.g. Lane and Milesi-Ferretti, 2007). An additional explanation is the transactions hypothesis proposed by Cornett et al. (1995), i.e. the bias to denominate and invoice international transactions in the exporting firm’s currency. Second, investors have a tendency to trade mainly during their own country’s working hours. Among the institutional reasons supporting this practice, there is the convention of closing or reducing open positions on exchange rates out of the liquidity clustering during the main working hours. In aggregate, the combination of these two factors creates sell-price (buy-price) pressure on the domestic currency during domestic (counterpart) working hours. In a trading environment with an imperfectly elastic supply and risk-averse agents, the purchase of foreign currency during domestic hours gives rise to cyclical patterns in terms of liquidity demand and inventory imbalances, engendering a depreciation (appreciation) of the home currency during domestic (foreign) working hours. Our study adds to the extant literature in two key regards. First, it examines in finer detail the cross-sectional and time-series characteristics of intraday returns on spot exchange rates across different time zones, working time periods and calendar events. While research on equity markets has found some significant day-of-week or intraday patterns on returns,2 the literature to date has little to say about the intraday patterns of exchange rate returns. In most previous studies, attention has instead been devoted to intraday volatility or bid-ask spreads.3 The notable exceptions are Cornett et al. (1995),4Ito, 1987, Ito and Roley, 1987 and Ito and Roley, 19915 and Wasserfallen (1989)6 but their papers present mixed and partial results. In particular, Cornett et al., 1995 and Wasserfallen, 1989 find that the US dollar depreciates at the beginning of the US working day whereas Ito and Roley, 1987 and Ito and Roley, 1991 find the opposite. Moreover, these studies are unable to put forward any comprehensive explanation. The transactions hypothesis of Cornett et al. (1995) is a complementary hypothesis to explain why US firms are likely to be net buyers of foreign currency during US trading hours. But it cannot explain the round-the-clock and pervasive phenomenon. Second, the goods/services trade accounts only for one-third of end-user trading in foreign exchange markets (BIS, 2007). Thus, the dominant part of financial transactions remains unexplained. Second, this research focuses on liquidity. While information effects have been carefully identified in the literature,7 much less is known about how liquidity influences exchange rate movements. Berger et al. (2008) investigate the joint behaviour of order flow and exchange rates at different sampling frequencies. Breedon and Vitale (2005) propose a structural model of exchange rate determination which disentangles the portfolio-balance and information effects of order flows. Marsh and O’Rourke (2005) address the question of whether information and/or liquidity can explain the positive contemporaneous correlation between exchange rate changes and net order flows. Here, we relate cyclical appreciations and reversals of the domestic currency to directional liquidity and inventory patterns. This paper is structured as follows. Section 2 provides statistical evidence on time-of-day market patterns. In Section 3, we propose an explanation for the time-of-day patterns. Section 4 presents the main empirical findings. Section 5 concludes the paper.

This study shows that domestic currencies tend to depreciate during domestic working hours and appreciate during the working hours of the counterpart country. We argue that domestic traders tend to buy foreign currencies during domestic working hours. Intraday time-series analysis and holiday effects provide preliminary support for this explanation. Future research on order flow data and cross-border capital inflows, possibly disaggregated across time-of-day intervals and geographical origin of the orders, should shed more light on this phenomenon.