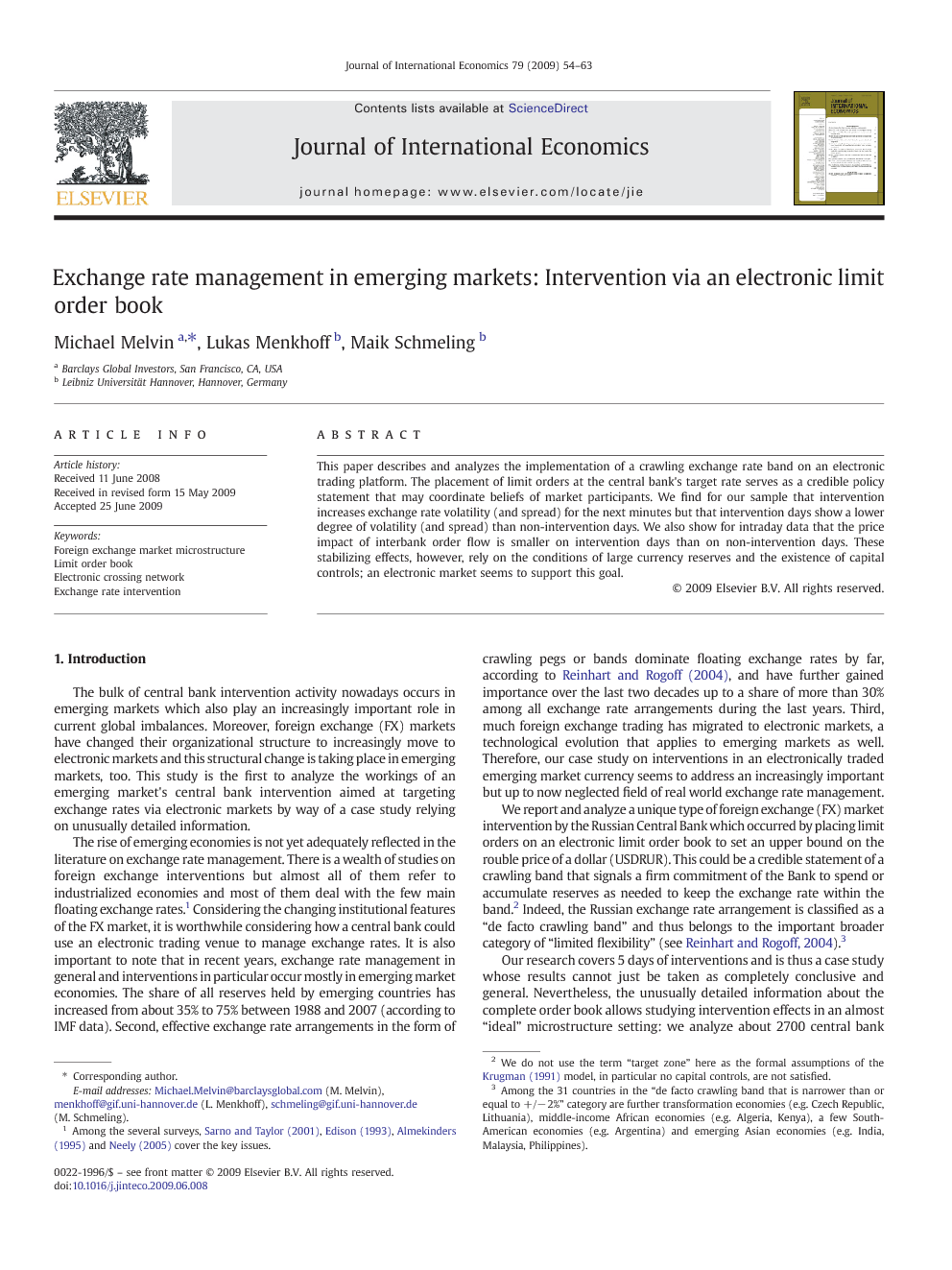 This paper describes and analyzes the implementation of a crawling exchange rate band on an electronic trading platform. The placement of limit orders at the central bank's target rate serves as a credible policy statement that may coordinate beliefs of market participants. We find for our sample that intervention increases exchange rate volatility (and spread) for the next minutes but that intervention days show a lower degree of volatility (and spread) than non-intervention days. We also show for intraday data that the price impact of interbank order flow is smaller on intervention days than on non-intervention days. These stabilizing effects, however, rely on the conditions of large currency reserves and the existence of capital controls; an electronic market seems to support this goal.

The bulk of central bank intervention activity nowadays occurs in emerging markets which also play an increasingly important role in current global imbalances. Moreover, foreign exchange (FX) markets have changed their organizational structure to increasingly move to electronic markets and this structural change is taking place in emerging markets, too. This study is the first to analyze the workings of an emerging market's central bank intervention aimed at targeting exchange rates via electronic markets by way of a case study relying on unusually detailed information. The rise of emerging economies is not yet adequately reflected in the literature on exchange rate management. There is a wealth of studies on foreign exchange interventions but almost all of them refer to industrialized economies and most of them deal with the few main floating exchange rates.1 Considering the changing institutional features of the FX market, it is worthwhile considering how a central bank could use an electronic trading venue to manage exchange rates. It is also important to note that in recent years, exchange rate management in general and interventions in particular occur mostly in emerging market economies. The share of all reserves held by emerging countries has increased from about 35% to 75% between 1988 and 2007 (according to IMF data). Second, effective exchange rate arrangements in the form of crawling pegs or bands dominate floating exchange rates by far, according to Reinhart and Rogoff (2004), and have further gained importance over the last two decades up to a share of more than 30% among all exchange rate arrangements during the last years. Third, much foreign exchange trading has migrated to electronic markets, a technological evolution that applies to emerging markets as well. Therefore, our case study on interventions in an electronically traded emerging market currency seems to address an increasingly important but up to now neglected field of real world exchange rate management. We report and analyze a unique type of foreign exchange (FX) market intervention by the Russian Central Bank which occurred by placing limit orders on an electronic limit order book to set an upper bound on the rouble price of a dollar (USDRUR). This could be a credible statement of a crawling band that signals a firm commitment of the Bank to spend or accumulate reserves as needed to keep the exchange rate within the band.2 Indeed, the Russian exchange rate arrangement is classified as a “de facto crawling band” and thus belongs to the important broader category of “limited flexibility” (see Reinhart and Rogoff, 2004).3 Our research covers 5 days of interventions and is thus a case study whose results cannot just be taken as completely conclusive and general. Nevertheless, the unusually detailed information about the complete order book allows studying intervention effects in an almost “ideal” microstructure setting: we analyze about 2700 central bank transactions within a total sample of more than 56,000 orders, among them about 30,000 transactions. This data has three distinct advantages: first, it provides knowledge of the exact time of central bank activity which the prior literature has usually inferred from news reports or actual price movements.4 Thus we can analyze precisely the effects of intervention in terms of the impact of central bank decisions to intervene and the consequent exchange rate effects of purchases or sales of currency.5 Second, the analysis undertaken in our paper is unique in that we study what could be called “automated intervention” in that the central bank determines a desired band for the exchange rate and then places very large limit orders to keep the exchange rate inside this band. Third, the data allows analyzing order flows which is quite new to the intervention literature.6 We find that intervention increases exchange rate volatility (and spread) for the next few minutes but that intervention days show a lower degree of volatility (and spread) than non-intervention days. We also show for intraday data that the price impact of interbank order flow is smaller on intervention days than on non-intervention days. Finally, we reveal that informed banks take different positions than uninformed banks as they tend to trade against the central bank — which reflects a rational stance. Despite this position taking, the targeted exchange rate band holds and volatility, spread and price impact go down. Overall, the intervention band seems to realize stabilizing effects. The success of such a regime for an emerging market currency is likely to depend on the conditions of large currency reserves and the existence of capital controls — conditions which were met for the Russian case under consideration. In 2002, capital controls in Russia were quite strict. The rigid controls in existence were imposed after the 1998 financial crisis. For instance, business firms had to apply on a case-by-case basis for permission prior to international transfers of capital. Exporters were required to sell 50% of their foreign currency proceeds to the central bank. Following the 1998 crisis, firms had a strong preference to hold convertible, reserve currencies like the U.S. dollar or euro, so the currency surrender requirement was viewed as essential to provide liquidity to the domestic foreign exchange market. Foreigners traded the rouble in the offshore non-deliverable forward (NDF) market and could not participate in the onshore market. In 2007, the rouble moved to deliverable status but foreign entities still preferred to trade offshore in many cases due to credit and political concerns. To this day, there is an active NDF market for the rouble. The paper is organized as follows. In the next section the institutional details of the electronic crossing network will be presented along with a detailed overview of the data available for analysis. Then in Section 3Effects of central bank limit orders, an empirical examination of the limit orders placed by the central bank is undertaken with a focus on its effect on volatility, spread, price impact of order flow and order choice. Section 4 Implications for the central bank discusses implications for the central bank and, finally, Section 5 Summary and conclusions offers a summary and conclusions.

This study provides evidence regarding central bank intervention activity in an emerging market via an electronic limit order book. Thus we contribute to the increasingly important field of interventions in emerging markets but we also contribute – due to unusually detailed data – to measuring the precise impact that interventions may have in modern electronic currency markets. We have focused on a short period of 2002 when the Russian Central Bank maintained an exchange rate band for the rouble price of a dollar by posting limit orders on an electronic crossing network. The central bank orders were very large relative to the market and served as a credible signaling device to private market participants. Due to available deep information about the order book, we are able to analyze this widespread exchange rate arrangement in a way not being tackled in the earlier literature.24 We find for our sample that trades at the central bank's limit price simultaneously induce a downward shift in volatility on a daily frequency, i.e. they reduce the overall level of volatility. However, at the intraday frequency, such trades induce a higher transitory volatility that lasts for a few minutes (results hold qualitatively for spreads). Moreover, in this arrangement the price impact of order flow is lower on days when the central bank is an active participant in the market and the price impact falls the closer price is to the central bank's limit. Finally, we see that more informed traders expect – in line with fundamentals and correctly in retrospect – a further decline of the rouble since they trade aggressively against the upper limit of the exchange rate band. It is likely that the central bank seeks to smooth the path of rouble depreciation in a crawling peg arrangement rather than defend a rigid peg at some particular exchange rate. Since market participants know the size of trades that occurred, the central bank's reserve losses are easily calculated. This transparency of the central bank's position is one potential disadvantage of using such a mechanism to limit exchange rate changes. However, there may be an informational counterweight in that the central bank also learned who was trading at their limit price as after each trade is completed, the parties learn each other's identity. So the central bank could potentially use moral suasion or other means to discipline any private banks that might be viewed as abusing the system or contributing to a speculative attack. The provision of liquidity via an electronic limit order book is only likely to serve as an effective exchange rate limiting device in a market where over-the-counter trading is small compared to the electronic market and liquidity is concentrated on one trading platform. In the case of Russia, non-residents traded in an offshore market due to a lack of full convertibility of the rouble so that the domestic market was segmented from outside pressures. This allowed the central bank to effectively facilitate a crawling exchange rate band using limit orders.