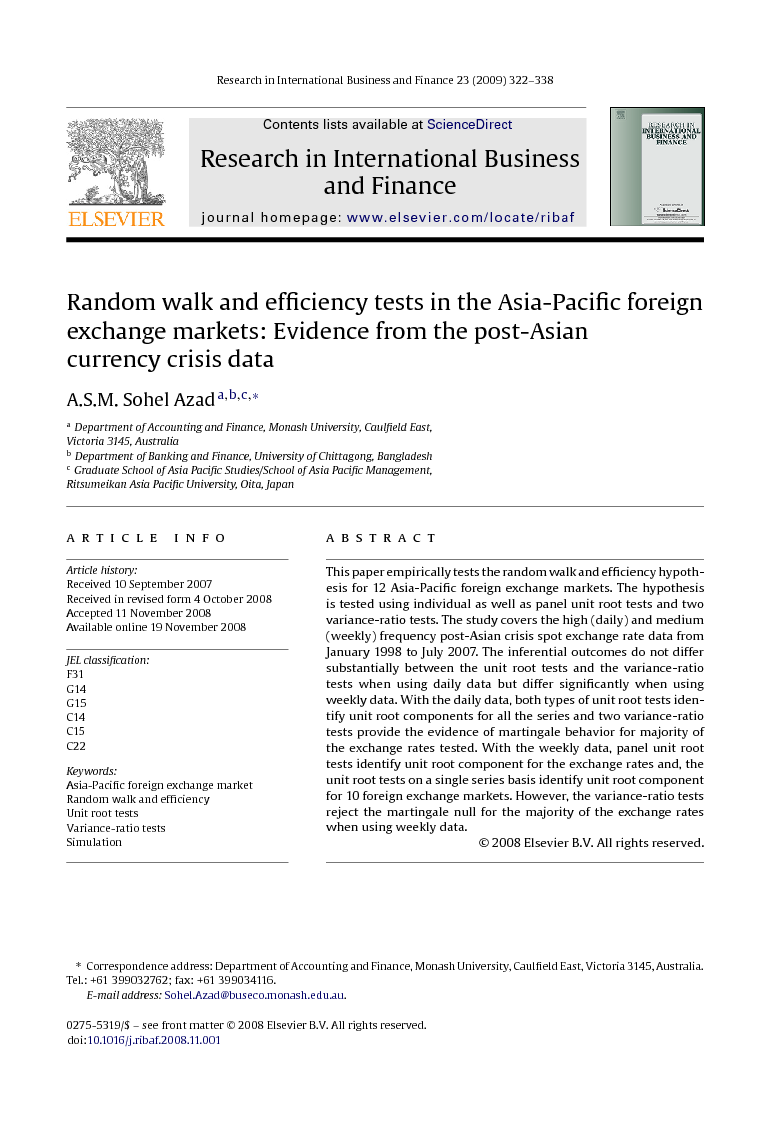 The purpose of this study was to report the differential outcomes from the econometric applications in explaining the financial market behavior and efficiency. Since the inferences are subject to change, it is very difficult to simply rely on estimation techniques in drawing conclusions on the market efficiency. Two major properties of the random walk hypothesis: (i) the unit root component and (ii) the martingale hypothesis are markedly observed in almost all currencies in the short-horizon but not in the long-horizon. For the inefficient markets in the short-horizon, the influence of the central bank and of the currency board should be reduced to turn these markets into efficient ones. Using both high and medium frequency data, the Wright's (2000) VR tests give fairly consistent results in terms of iid/mds null violations. But the L–M VR tests give mixed results under the assumption of homoskedasticity and heteroskedasticity. Further, the L–M VR tests are characterized as consistent for the weekly data. We can draw several other conclusions from the findings. Since the daily data reflect the most new information in the prices, we find that the majority of the exchange rate series exhibits a random walk and hence there is not much motivation for the investors. But, some of the investors usually hold the currencies in their portfolios for more than one trading days to offset any loss from the daily trading. In that case, weekly data can be taken to draw conclusions. The results from the weekly data indicate that the returns from the majority of the exchange rates investigated are correlated and consequently, the random walk hypothesis can be strongly rejected for these markets. Based on this, investors try to bet on speculative/arbitrage opportunities. In both cases, investors should carefully evaluate the risks involved with the currencies they trade, the relevant financial market policies and the foreign exchange rate regimes. In the markets where the access to the official exchange market is limited, there is the dominance of parallel/black markets. In these markets, policy implications should be linked to the low and medium frequency data. It is true that the inferences would differ across the data sets taken for analysis. Any policy implications should be linked to the exchange rate regime, the size and the development of the financial markets. This is because there is much reason to find the evidence of market efficiency for the developed market with the high frequency data but not with the low or medium frequency data. The reverse is true for the emerging/underdeveloped markets, where the policies should be linked to the low or medium frequency data. Our results indicate that the markets are efficient with the high frequency data but not with the medium or low frequency data. One of the policies toward making these markets efficient is to adopt financial deregulation measures, including the relaxation of foreign exchange market intervention and allowing an expanded role of the foreign banks to increase the scale and scope of the markets and products. Otherwise, the inter-temporal market inefficiency as observed in some markets with the long holding period and/or low frequency data may persuade the investors to take risky decisions on the currencies they deal. In this case, mostly the small investors suffer both profit and capital losses unless they trade in the parallel/black markets, where the access to official exchange market is restricted and/or online trading is yet to be developed. The natural development of the capital market is also hindered. In the developed markets where trading is mostly handled online and the speculative positions are less than a minute, the small investors cannot wait for long to take investment decision. If they do so, they will make huge losses that cannot be replenished by a meager amount of capital. On the contrary, the large investors have the ability to allow the prices to fluctuate and adjust with new market information. Nonetheless, both the risks and gains for them are enormously high and any bad information would result in losses for them as well but their capital is sufficient to cover the losses to survive in the trading. The paper ends with some future research directions. While the paper explores a number of bilateral exchange rates with the US, not all the currencies, however, behave under free-floating. Some countries, as noted in Appendix C, are found to maintain a peg with the Dollar. Thus, some of the markets are not efficient due to the policy of exchange rate regulations that they follow. It is to note that bilateral exchange rates do not describe fully the triangular nature of nominal prices. For instance, the bilateral exchange rate of Korea and Japan with the US and its evolution also affects the behavior of the exchange rate between Korea and Japan by arbitrage. This suggests that exchange rates are interdependent, and in turn may be quite often correlated. Since exchange rates (and their innovations) are potentially correlated, it may be more sensible to explore the time series properties of the data jointly for all countries. Future researcher may try to explore these issues considering the exchange rate regimes and the factors that affect the inefficiency of foreign exchange markets.