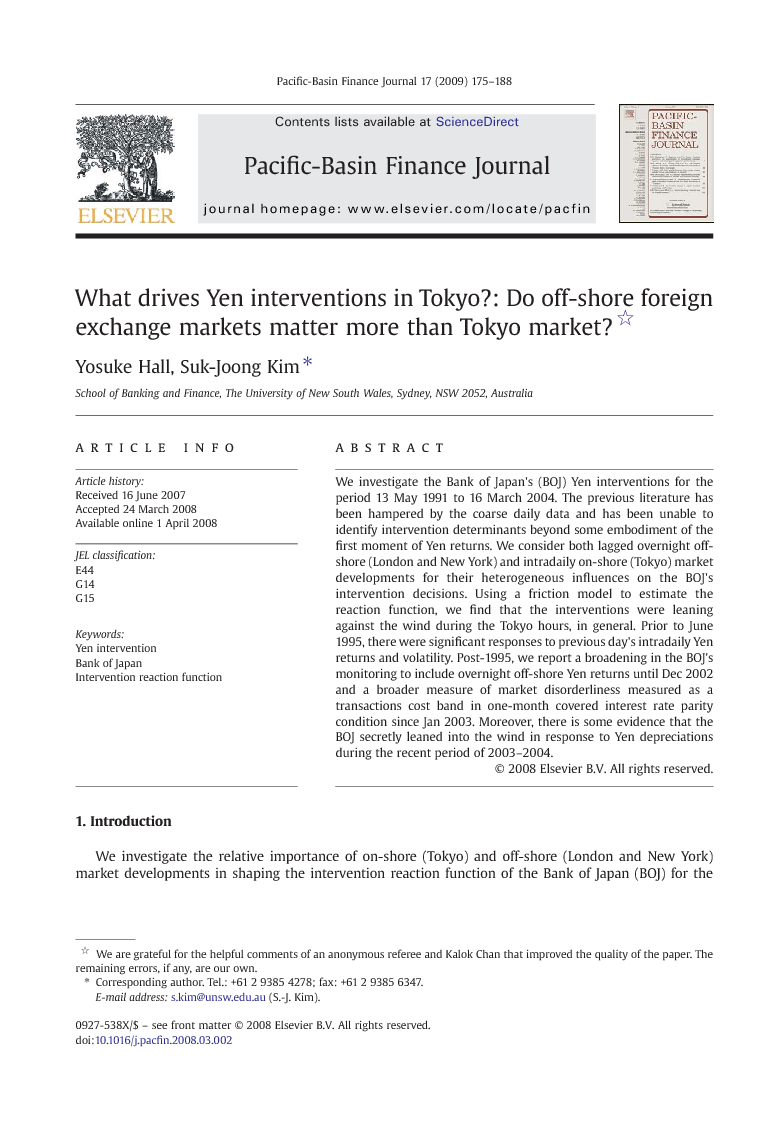 We investigate the Bank of Japan's (BOJ) Yen interventions for the period 13 May 1991 to 16 March 2004. The previous literature has been hampered by the coarse daily data and has been unable to identify intervention determinants beyond some embodiment of the first moment of Yen returns. We consider both lagged overnight off-shore (London and New York) and intradaily on-shore (Tokyo) market developments for their heterogeneous influences on the BOJ's intervention decisions. Using a friction model to estimate the reaction function, we find that the interventions were leaning against the wind during the Tokyo hours, in general. Prior to June 1995, there were significant responses to previous day's intradaily Yen returns and volatility. Post-1995, we report a broadening in the BOJ's monitoring to include overnight off-shore Yen returns until Dec 2002 and a broader measure of market disorderliness measured as a transactions cost band in one-month covered interest rate parity condition since Jan 2003. Moreover, there is some evidence that the BOJ secretly leaned into the wind in response to Yen depreciations during the recent period of 2003–2004.

We investigate the relative importance of on-shore (Tokyo) and off-shore (London and New York) market developments in shaping the intervention reaction function of the Bank of Japan (BOJ) for the period 1991 to 2004.1 The BOJ has been one of the most prominent central authorities to participate in the foreign exchange market with the objective of altering the underlying exchange rate dynamics. Since the release of the historical BOJ intervention data by the Japanese Ministry of Finance in July 2001, a long list of researchers have investigated various aspects of the BOJ interventions. This literature has examined intervention effectiveness by determining whether the first and second moments of the Yen/USD exchange rate returns are affected in the desired direction, or if prominent trends are reduced (Beine, 2004, Chaboud and Humpage, 2003, Fatum and Hutchison, 2003 and Nagayasu, 2004). The BOJ's intervention reaction function has also been investigated (Ito, 2002, Ito and Yabu, 2007 and Kim and Sheen, 2006). Various researchers have experimented with the ‘usual suspects’ in prompting interventions and these include different guises of first and second moments of target exchange rate movements (see Neely, 2005 and Sarno and Taylor, 2001). The common finding is that the BOJ seemed to lean against the wind (LATW) in response to a deviation from some target exchange rate (or movements). In addition, there have been some attempts to examine intervention profitability and monetary policy considerations (Kim and Sheen, 2006). However, a major shortfall in the literature, in general, is the usage of coarse daily data which is incapable of capturing the time varying nature of the information content on the variables of interest. The Bank of Japan (2000) states that Yen interventions are implemented to ‘mitigate the negative influence’ of exchange rate fluctuations after monitoring and analysing developments in the foreign exchange markets ‘day and night’. However, they have never released a categorical breakdown of when, why or even how they will intervene. The combination of the current lack of an official stance on the determinants of intervention and the need to understand these motives by the foreign exchange market participants has been the major impetus for researchers to uncover the true drivers the BOJ's intervention. However, investigation into the extent to which the BOJ responds differently to market information coming from different segments of a 24-hour trading day is yet to be added to the literature. This is an important issue because Yen is a 24-hour trading currency and yet the BOJ's Yen intervention is mostly confined to Tokyo trading hours (Dominguez, 2003), and so market participants need to understand the BOJ's likely responses to market developments emanating from both on- and off-shore trading hours. In this paper, we address this shortfall and investigate the BOJ's proclamation that it analyses market developments ‘day and night’. Our objective is to ascertain whether the exchange rate developments during the intradaily on-shore period or the overnight off-shore period preceding the day of intervention have a greater impact on the final intervention decision of the BOJ. This is an important issue because if the BOJ is not monitoring and responding to the market developments of both segments, the intervention decision is likely to be based on an incomplete set of information. A poorly implemented intervention can be costly not only because of the transaction costs involved, but because it can potentially reduce the potency of future interventions when faced with serious market turbulences. We divide a 24-hour trading day into on- and off-shore trading hours and investigate the intervention decisions of the BOJ for the period 13 May 1991 to 16 March 2004. In addition, we also investigate different roles these determinants might play in inviting secret as opposed to publicly known interventions. The major findings of this paper are as follows. i) Prior to June 1995, the BOJ responded only to disorderliness emanating from the previous day's Tokyo market by LATW interventions. However, during Jun 1995 to Dec 2002, the BOJ responded to overnight Yen returns. On the days following a persistent overnight trend, however, it refrained from intervening. ii) In all samples, the BOJ responded to on-shore Tokyo market volatility, however, it refrained from intervening on the days following high levels of volatility in the post-95 samples. iii) During the recent period (Jan 2003–Mar 2004) the BOJ also reacted to a broad measure of market uncertainty proxied by a transaction cost band (TCB) around one-month covered interest rate parity in the overnight London markets. A widening TCB led to LATW interventions in the subsequent Tokyo market. We also find that the BOJ secretly ‘leaned into the wind’ when Yen depreciated during the previous day's intradaily Tokyo market. iv) The BOJ tolerated Yen depreciations more than appreciations apparently to ensure external competitiveness. The post-95 samples show a much greater asymmetry which is consistent with the dominance of Yen sale interventions during the periods. Thus, our paper significantly contributes to the literature by providing new and much richer understanding of the intervention determinants of the BOJ than the current knowledge. The rest of the paper is organized as follows. The data issues are presented in Section 2 and the modeling strategies are discussed in Section 3. Section 4 presents the empirical results and conclusions are offered in Section 5.

The main theme of this paper has been to explore to what extent the foreign exchange market developments during both the intradaily on-shore Tokyo and overnight off-shore horizons determined the BOJ's Yen intervention decisions for the period from 13 May 1991 to 16 March 2004. The literature has thus far utilized coarse daily data and the BOJ's reaction functions estimated provide an incomplete picture. This paper is the first research that investigates the relative importance of different market segments in the 24-hour Yen trading in relation to the BOJ's intervention reaction function. We uncovered the details of intervention determinants that the previous researchers failed to observe, and so the results we report provide an important additional layer of understanding. Specifically, we document the shifting focus of BOJ's intervention reaction function over the three sub-periods we considered. Prior to June 1995, the BOJ was responsive only to market developments during the previous day's intradaily Tokyo trading hours. However, during the period June 1995 to Dec 2002 it also responded to overnight off-shore market returns. In fact, the overnight Yen movements yielded more influence (nearly three times) than the previous day's Tokyo market movements. During the recent period of Jan 2003 to Mar 2004, the BOJ responded only to lagged intradaily volatility and to an overall measure of market uncertainty proxied by a transaction cost band around one-month covered interest rate parity condition. In addition, we show that most of the interventions during this period were not publicly known (or secret) as they occurred, and the BOJ secretly ‘leaned into the wind’ when Yen depreciated during the previous day's intradaily Tokyo market. In all, our investigation yielded much richer evidence of time varying nature of intervention determinants than the current literature. The fact that we found significance for volatility (and a general measure of market disorderliness) as a major driving force of an intervention decision whilst others, in general, do not could be due to our noble approach of disaggregating holding periods. Thus, our evidence on the relative importance of off-shore vs. on-shore movements of the determinants adds significantly to the intervention literature.