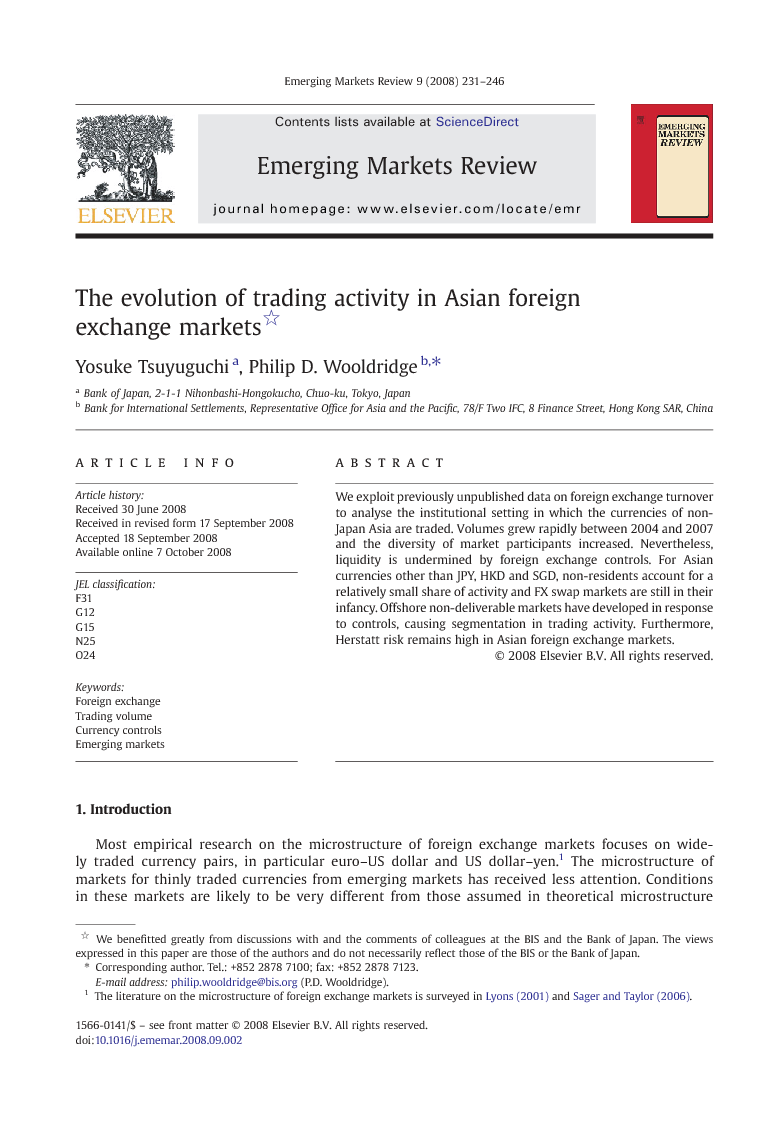 We exploit previously unpublished data on foreign exchange turnover to analyse the institutional setting in which the currencies of non-Japan Asia are traded. Volumes grew rapidly between 2004 and 2007 and the diversity of market participants increased. Nevertheless, liquidity is undermined by foreign exchange controls. For Asian currencies other than JPY, HKD and SGD, non-residents account for a relatively small share of activity and FX swap markets are still in their infancy. Offshore non-deliverable markets have developed in response to controls, causing segmentation in trading activity. Furthermore, Herstatt risk remains high in Asian foreign exchange markets.

Most empirical research on the microstructure of foreign exchange markets focuses on widely traded currency pairs, in particular euro–US dollar and US dollar–yen.1 The microstructure of markets for thinly traded currencies from emerging markets has received less attention. Conditions in these markets are likely to be very different from those assumed in theoretical microstructure models (Bekaert and Harvey, 2002). To improve our understanding of the factors influencing the trading process in emerging markets, we analyse the institutional structure of Asian foreign exchange markets. Our analysis relies mainly on data from the Bank for International Settlement's (BIS's) Triennial Central Bank Survey of Foreign Exchange and Derivatives Market Activity. This survey is the most comprehensive source of information on turnover in global foreign exchange markets. Turnover, when averaged across time, captures the order flow a market typically accommodates so can be interpreted as a measure of the depth of the market. Depth, in turn, is a key dimension of market liquidity (Committee on the Global Financial System, 2000). In general, markets with high turnover trade at tighter bid-ask spreads and are more resilient, in the sense of being less prone to imbalances in buy and sell orders. Order flow is also an important means of transmitting information relevant to the determination of exchange rates (Lyons, 2001). However, in this paper we do not consider the price impact of order flow. We focus on turnover to the exclusion of prices and consequently provide an incomplete picture of the structure of Asian foreign exchange markets. That said, we describe the institutional setting in more detail than previous studies by exploiting turnover data not previously published by the BIS, distinguishing in particular between on- and offshore trading by different counterparties and in different instruments. Research on the microstructure of emerging foreign exchange markets is in its infancy, restrained mainly by a lack of data. There is a growing literature on the impact of central bank intervention on the level and volatility of emerging market currencies, reviewed in Disyatat and Galati (2005). A few other studies examine the institutional setting in which foreign exchange trading takes place. Based on a survey of foreign exchange markets in developing and transition economies, Canales-Kriljenko (2004) concludes that foreign exchange regulations and the role of the central bank heavily influence the structure of the market. Ho et al. (2005) analyse factors that influence the trading and pricing of Asian currencies. Ho et al. (2004) and Debelle et al. (2006) examine forward currency markets in Asia. Building on these latter studies, we examine the factors behind the recent growth of trading volumes in Asian foreign exchange markets, the types of participants active in these markets, the choice of vehicle currency, the location of trades and the kinds of instruments traded. We take a comparative approach: the turnover of 10 currencies from non-Japan Asia – Chinese renminbi (CNY), Hong Kong dollar (HKD), Indian rupee (INR), Indonesia rupiah (IDR), Korean won (KRW), Malaysian ringgit (MYR), Philippine peso (PHP), Singapore dollar (SGD), Thai baht (THB) and New Taiwan dollar (TWD) – is contrasted with the turnover of seven widely traded currencies – Australian dollar (AUD), Canadian dollar (CAD), euro (EUR), Japanese yen (JPY), New Zealand dollar (NZD), pound sterling (GBP) and US dollar (USD). For convenience, we refer to this latter group as “internationalised” currencies. An internationalised currency is one that can be exchanged freely for other currencies and used to denominate debt and other contracts outside its country of issue (McCauley, 2006). Of the 10 currencies from non-Japan Asia that we consider, two – HKD and SGD – can be considered internationalised currencies; however, for purposes of comparison, we group them with Asian currencies. One striking finding is that activity in Asian currencies is concentrated in onshore markets to a much greater degree than that in major currencies. This indicates that foreign exchange controls are having the intended effect of stalling the internationalisation of Asian currencies and, therefore, potentially hindering the integration of Asian financial markets with world markets. At the same time, foreign exchange controls are restraining the development of Asian foreign exchange markets by depressing derivatives trading and segmenting activity between on- and offshore markets. Notwithstanding the adverse impact of foreign exchange controls on market liquidity, we find that the depth and breadth of Asian foreign exchange markets have improved markedly in recent years. The rest of the paper proceeds as follows. Section 2 describes the data. 3, 4, 5, 6 and 7 analyse various disaggregations of the data: by year, by counterparty, by currency pair, by location and by instrument. Section 8 concludes and offers suggestions for further research.