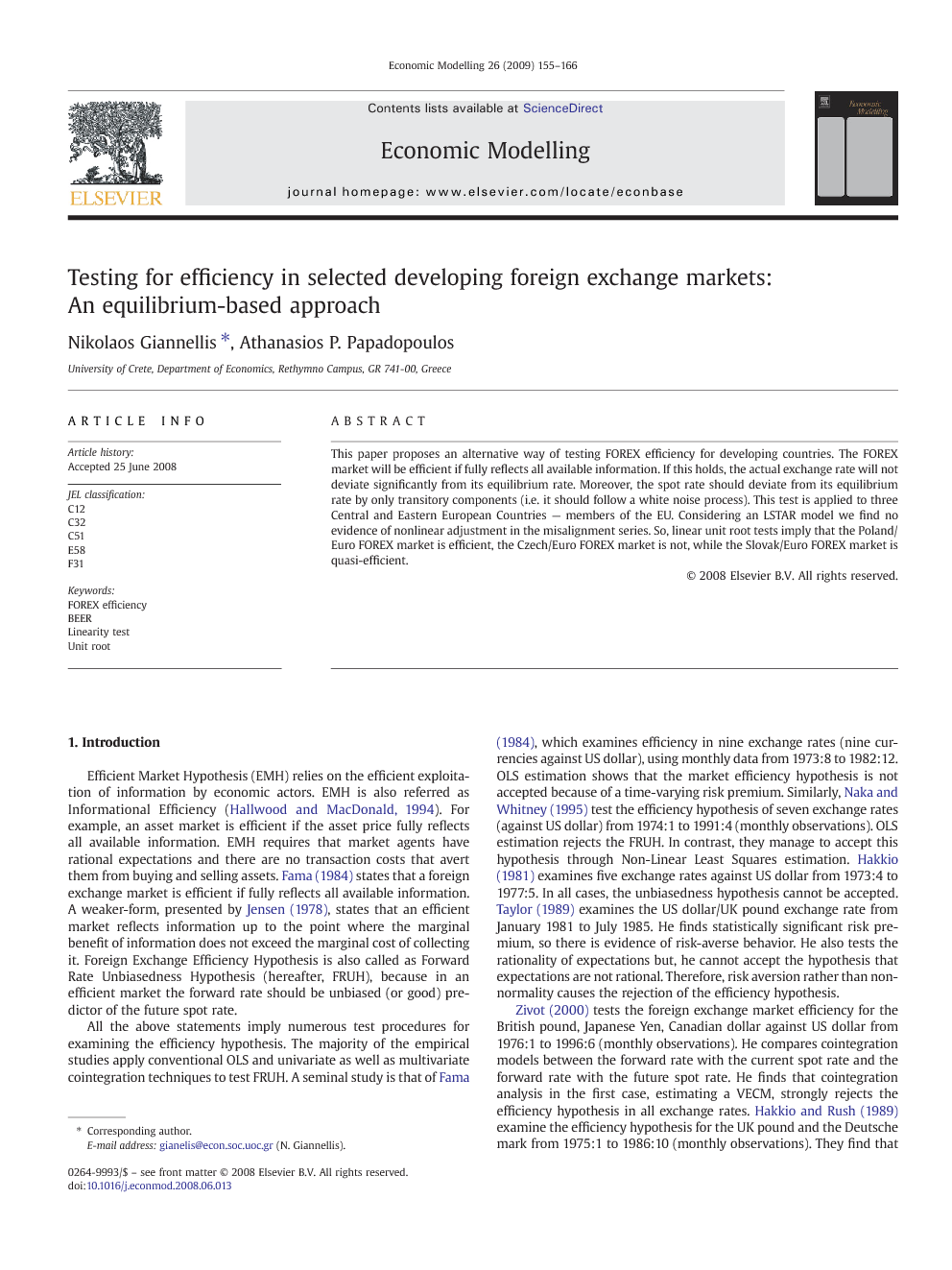 This paper proposes an alternative way of testing FOREX efficiency for developing countries. The FOREX market will be efficient if fully reflects all available information. If this holds, the actual exchange rate will not deviate significantly from its equilibrium rate. Moreover, the spot rate should deviate from its equilibrium rate by only transitory components (i.e. it should follow a white noise process). This test is applied to three Central and Eastern European Countries — members of the EU. Considering an LSTAR model we find no evidence of nonlinear adjustment in the misalignment series. So, linear unit root tests imply that the Poland/Euro FOREX market is efficient, the Czech/Euro FOREX market is not, while the Slovak/Euro FOREX market is quasi-efficient.

Efficient Market Hypothesis (EMH) relies on the efficient exploitation of information by economic actors. EMH is also referred as Informational Efficiency (Hallwood and MacDonald, 1994). For example, an asset market is efficient if the asset price fully reflects all available information. EMH requires that market agents have rational expectations and there are no transaction costs that avert them from buying and selling assets. Fama (1984) states that a foreign exchange market is efficient if fully reflects all available information. A weaker-form, presented by Jensen (1978), states that an efficient market reflects information up to the point where the marginal benefit of information does not exceed the marginal cost of collecting it. Foreign Exchange Efficiency Hypothesis is also called as Forward Rate Unbiasedness Hypothesis (hereafter, FRUH), because in an efficient market the forward rate should be unbiased (or good) predictor of the future spot rate. All the above statements imply numerous test procedures for examining the efficiency hypothesis. The majority of the empirical studies apply conventional OLS and univariate as well as multivariate cointegration techniques to test FRUH. A seminal study is that of Fama (1984), which examines efficiency in nine exchange rates (nine currencies against US dollar), using monthly data from 1973:8 to 1982:12. OLS estimation shows that the market efficiency hypothesis is not accepted because of a time-varying risk premium. Similarly, Naka and Whitney (1995) test the efficiency hypothesis of seven exchange rates (against US dollar) from 1974:1 to 1991:4 (monthly observations). OLS estimation rejects the FRUH. In contrast, they manage to accept this hypothesis through Non-Linear Least Squares estimation. Hakkio (1981) examines five exchange rates against US dollar from 1973:4 to 1977:5. In all cases, the unbiasedness hypothesis cannot be accepted. Taylor (1989) examines the US dollar/UK pound exchange rate from January 1981 to July 1985. He finds statistically significant risk premium, so there is evidence of risk-averse behavior. He also tests the rationality of expectations but, he cannot accept the hypothesis that expectations are not rational. Therefore, risk aversion rather than non-normality causes the rejection of the efficiency hypothesis. Zivot (2000) tests the foreign exchange market efficiency for the British pound, Japanese Yen, Canadian dollar against US dollar from 1976:1 to 1996:6 (monthly observations). He compares cointegration models between the forward rate with the current spot rate and the forward rate with the future spot rate. He finds that cointegration analysis in the first case, estimating a VECM, strongly rejects the efficiency hypothesis in all exchange rates. Hakkio and Rush (1989) examine the efficiency hypothesis for the UK pound and the Deutsche mark from 1975:1 to 1986:10 (monthly observations). They find that spot and forward rates, within a country, are cointegrated, which is consistent with efficiency. But, the estimation of the error correction model rejects the hypotheses of no risk premium and efficient use of the available information by the agents. These findings reject the foreign exchange market efficiency hypothesis. A multivariate cointegration analysis in an international framework, performed by Baillie and Bollerslev (1989), shows that spot rates are cointegrated. This finding is interpreted by the authors as a violation of the efficiency hypothesis because the disequilibrium error can predict the future change in the spot rate.1 Other studies in that field, providing mixed implications about market efficiency, are those of Sephton and Larsen (1991), Corbae et al. (1992) and Dutt (1994). Although the FRUH is appropriate for testing FOREX efficiency between developed markets, this is not suitable when developing counties is the case. These countries do not have well-developed and independent from the government financial systems. Therefore, forward rates may be highly regulated and as a consequence inappropriate for deriving any inferences about foreign exchange efficiency. In some cases, forward markets are totally absent and the forward rates are unavailable. Aron (1997) proposes a test of foreign exchange efficiency by regressing the long run relationship of the spot rate with a vector of fundamentals.2 Although, Wickremasinghe (2004) applies a cointegration test in the case of a developing country, we cannot adopt this methodology.3Hodrick (1987), Baffes (1994), Engel (1996) and others emphasize the invalid properties of this test. As a consequence, the empirical tool for testing this hypothesis in developing markets is still missing. This paper proposes an alternative way of testing Foreign Exchange Market Efficiency Hypothesis for Developing Countries. This methodology is based on the Behavioral Equilibrium Exchange Rate (Clark and MacDonald, 1998). The FOREX market will be efficient if fully reflects all available information. If this holds, the actual exchange rate will not deviate significantly from its equilibrium rate. The proposed methodology concentrates on the statistical properties of the misalignment rate. Considering a Logistic Smooth Transition Autoregressive (LSTAR) model we test whether a nonlinear STAR model or a linear autoregressive model should be estimated. This test is applied to three Central and Eastern European Countries — members of the EU. In each case, we examine exchange rates per EURO to find whether these rates imply efficient foreign exchange markets. The contribution of this paper is twofold. Firstly, we find whether those countries' currencies are misaligned against EURO. This is an important information regarding their perspective membership of EMU. Secondly, this paper provides an appropriate framework of examining FOREX efficiency when a developing country is the case. To our knowledge of literature, this is the first time the concept of equilibrium exchange rate (BEER) is applied to characterize a foreign exchange market as efficient or inefficient.4 The structure of the paper is as follows. The model and the proposed test are described in the following section. Section 3 describes the dataset and Section 4 presents our estimation. A final section summarizes and discusses the policy implications of this analysis. It is shown that there is a strong connection among equilibrium rates, market efficiency and currency crises. As a matter of fact, the issue of currency crises cannot be isolated from this of equilibrium exchange rates.

The Forward Rate Unbiasedness Hypothesis (FRUH), as an instrument of testing foreign exchange market efficiency, is appropriate only when developed countries are examined. Even if forward markets in developing countries exist, forward rates may be highly regulated by governments. This is because many developing countries have not well-developed and independent from the government financial systems. As a matter of fact, we cannot rely on forward rates in order to make valid implications on FOREX market efficiency. Here we propose a test procedure based on equilibrium exchange rates, i.e. Behavioral Equilibrium Exchange Rate (BEER). An efficient FOREX market requires the exchange rate (spot rate) not to be highly unstable and misaligned and to deviate from its equilibrium rate by only transitory components. The statistical sense of this final requirement is that the misalignment should follow a white noise process. Based on BEER analysis, on average the Polish zloty/Euro exchange rate is away from its equilibrium rate by 4%, the Czech crown/Euro exchange rate deviates by 2%, while the Slovak crown/Euro exchange rate is misaligned by less than 1%. These estimates provide positive implications regarding the low misalignment condition. However, the magnitude of the misalignment cannot be alone a useful tool. According to the proposed methodology, the misalignment should be characterized by a stationary mean-reverting process. Considering an LSTAR model we find no evidence of nonlinear adjustment in the examined series. So, linear unit root tests imply that the Poland/Euro FOREX market is efficient, the Czech/Euro FOREX market19 is not, while the Slovak/Euro FOREX market is quasi-efficient. This implies that the latter misalignment is characterized by a stationary process, interrupted by a structural break. A question arises is whether the monetary authorities should respond to the inefficiency of the foreign exchange market. In other words, what are the policy implications by this analysis? Should the Central Bank leave the market alone to be driven to equilibrium by its own forces or it should intervene to correct any misalignments. In terms of foreign exchange market efficiency, any government intervention is a sign as well as a source of inefficiency. But, by intervening in the FOREX market, the exchange rate is driven closer to its equilibrium. We saw in the case of Czech/Euro exchange rate that a lower misalignment rate (manipulated by the monetary authorities) does not necessarily imply efficiency. But, what we actually desire more, a misaligned self-driven exchange rate (consistent with efficiency) or a manipulated equilibrium exchange rate (inconsistent with efficiency)? This is a dilemma because a misaligned exchange rate can create a competitiveness problem (when overvaluation is the case) or inflationary pressures (when undervaluation is the case). On the other hand, government interventions can be seen by speculators as evidence of inefficiency. When a market is inefficient there is room for speculative attacks, which may lead to a currency crisis.20 It seems sensible that we cannot provide a unique answer. The response of the Central Bank should be subject to the specific conditions of the market as well as to the nature of the exchange rate misalignment. In other words, if the possibility of speculative attacks is high, they should avoid any kind of intervention. But how can we figure out if a currency crisis is possible to occur? We have to examine a number of economic conditions in the domestic economy, such as macroeconomic fundamentals' performance; monetary and fiscal position; financial sector's stability and political situation. Economic performance is poor before crises. Moreover, there is a bi-directional relation between banking and currency crises. (Kaminsky and Reinhart, 1999). Namely, financial instability can import problems to the foreign exchange market. Finally, political situation is an important factor for crises. The empirical evidence shows that speculative attacks are more possible to succeed in countries with unstable political systems (Eichengreen et al., 1995). In addition, although fiscal situation is not directly linked with currency crises (only money-financed deficits are sources of speculative attacks); the evidence shows that some times it is related with attacks. This is because governments apply expansionary fiscal policies to reduce political cost. This study stresses the strong linkages among equilibrium exchange rates, market efficiency and currency crises. When it comes to examined foreign exchange markets, two of them are found to be efficient. That's means that no government intervention is needed. On the other hand, the Czech/Euro FOREX market is found to be inefficient. Given that Czech Republic performs successful economic and political reforms, combined with a tight monetary policy (inflation and interest rates are decreasing over time), we can argue that a controlled and moderate intervention will not be so dangerous for the domestic currency. However, a more careful examination is required, which is left for a future study.