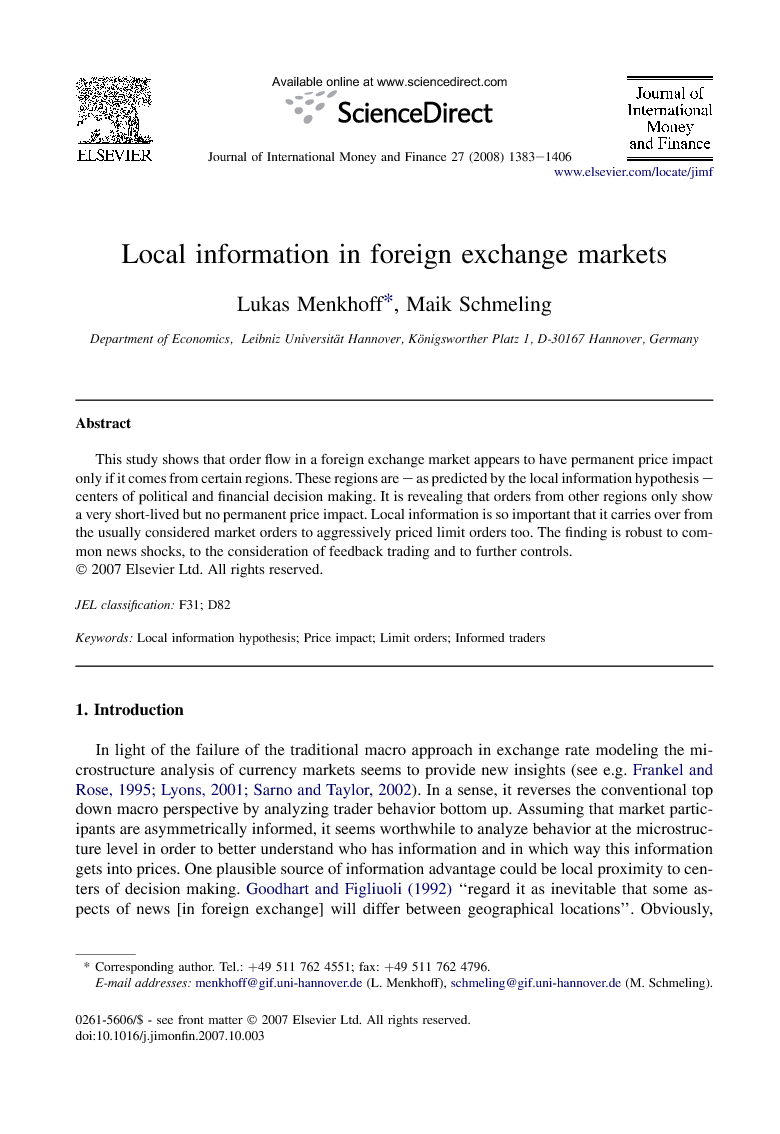 This study shows that order flow in a foreign exchange market appears to have permanent price impact only if it comes from certain regions. These regions are – as predicted by the local information hypothesis – centers of political and financial decision making. It is revealing that orders from other regions only show a very short-lived but no permanent price impact. Local information is so important that it carries over from the usually considered market orders to aggressively priced limit orders too. The finding is robust to common news shocks, to the consideration of feedback trading and to further controls.

This paper supports the hypothesis that information is asymmetrically distributed between locations in foreign exchange markets. As our standard method to infer about information, we use price impact analyses to determine whether orders have transitory or permanent impact (Hasbrouck, 2006). If prices change temporarily, this is interpreted as indicating market frictions, such as short-term liquidity shocks. If prices, however, do not reverse after a trade to the former level, information is conveyed. The local information hypothesis states that information may be asymmetrically distributed between different regions. Those locations which are close to centers of decision making are potentially better informed, whereas peripheral locations are expected to be rather less informed. In the Russian rouble/dollar market under review, locations being close to decision makers should be in the region of Moscow and possibly the region of St. Petersburg, the center regions. Orders from the six other regions, being quite different from the two centers according to the Russian economic statistics, should be less informed on average. Fortunately, the data set of 9 days country-wide interbank RUR/USD trading allows allocating orders to eight regions each. Accordingly, the local information hypothesis can be tested with exact trading data for the first time in foreign exchange. We do, indeed, find that regions make a difference in the price impact of orders. Orders from the center regions tend to move prices permanently, i.e. they provide information. Orders from other regions, however, move prices for a few minutes only before they reverse to their former level. Local information is so important, according to our analysis, that it even dominates conventional wisdom regarding preferred order type. Earlier studies have argued forcefully that informed traders prefer market orders and the uninformed tend to rely on limit orders (see the excellent discussion in Bloomfield et al., 2005). Consequently, the former have price impact and the latter have not. In a novel analysis we break down this simplified distinction of two cases – market versus limit orders – into six cases, i.e. three types of orders times two types of traders, either from center regions or others. Due to this disaggregation we find that location “beats” order type. Market orders and aggressively priced limit orders of center traders are informative whereas orders from other regions are on average never informative, whatever order type they choose. This evidence cannot be easily explained by different order size as we measure the price impact per dollar. Moreover, we control for possible effects of common news shocks and feedback trading which might both drive results, as has been argued recently. The findings are robust to and also hold for different aggregation of trading data, for splits of the overall sample, for various market conditions and when we control for trader size. Finally, concerns might refer to the Russian RUR/USD market, which is small compared to world's leading markets. This lower transaction volume, however, basically seems to reflect the smaller size of the Russian economy and does not lead to different market statistics. Moreover, the Russian foreign exchange market uses a very similar trading technology to other leading electronic currency markets. Nevertheless, we have conducted standard tests on market behavior to see whether this market might be different; results confirm market characteristics of leading markets as examined, for example, by Payne (2003). Therefore, findings may be seen as an extension of earlier price impact analyses: we split aggregate order flow according to regions and in a further step even consider aggressively priced limit orders. Whatever analysis is performed, order flows from the center regions tend to be informed and order flows originating from other regions are not – providing strong evidence in favor of local information in foreign exchange markets.