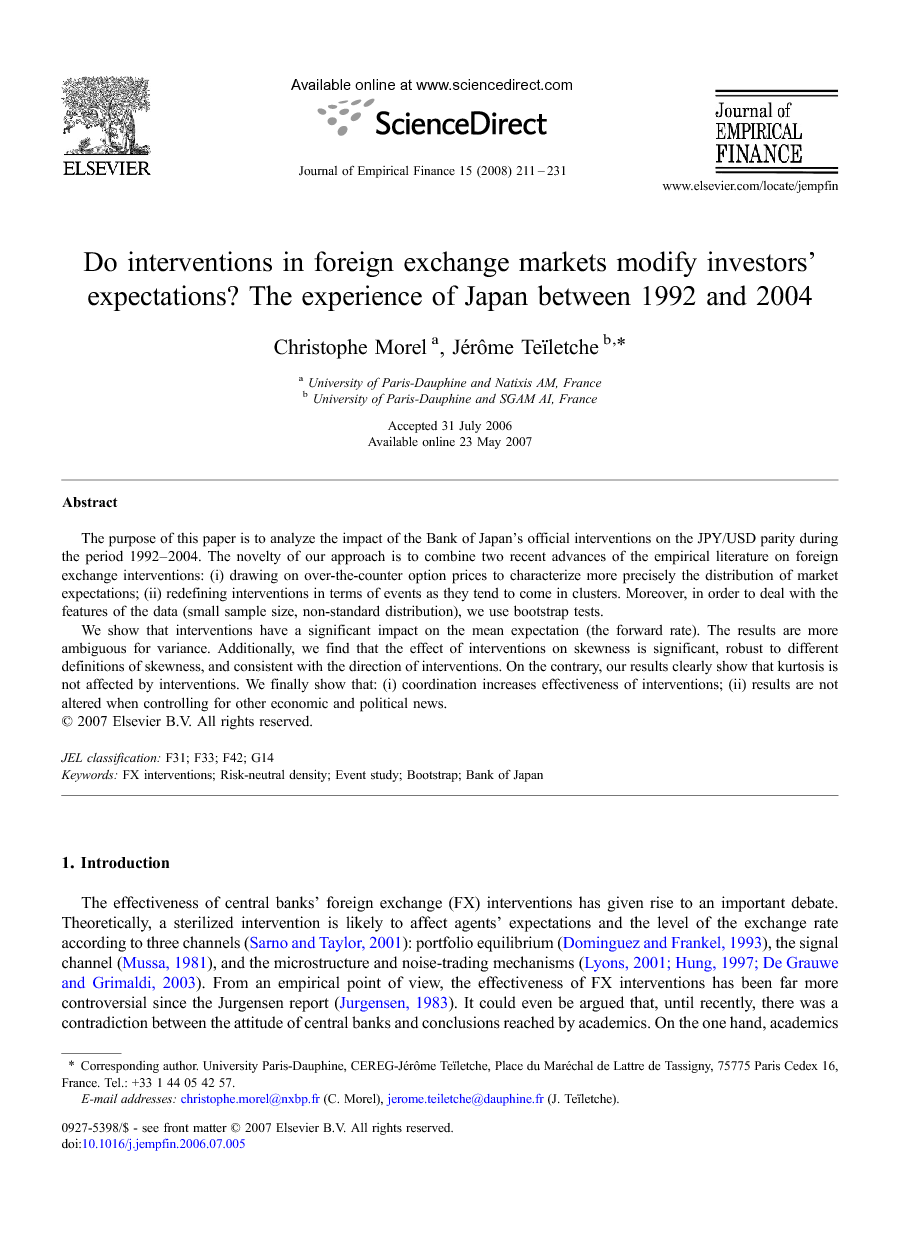 The purpose of this paper is to analyze the impact of the Bank of Japan's official interventions on the JPY/USD parity during the period 1992–2004. The novelty of our approach is to combine two recent advances of the empirical literature on foreign exchange interventions: (i) drawing on over-the-counter option prices to characterize more precisely the distribution of market expectations; (ii) redefining interventions in terms of events as they tend to come in clusters. Moreover, in order to deal with the features of the data (small sample size, non-standard distribution), we use bootstrap tests. We show that interventions have a significant impact on the mean expectation (the forward rate). The results are more ambiguous for variance. Additionally, we find that the effect of interventions on skewness is significant, robust to different definitions of skewness, and consistent with the direction of interventions. On the contrary, our results clearly show that kurtosis is not affected by interventions. We finally show that: (i) coordination increases effectiveness of interventions; (ii) results are not altered when controlling for other economic and political news.

In this article, we have analyzed the impact of the BoJ's official interventions on the first four moments of the distribution of market (risk-neutral) expectations on the JPY/USD exchange rate. Following Fatum and Hutchison (2006), we have favored an approach based on event studies, far more adapted to the nature of intervention data (as they occur in clusters) than the conventional time series approach. Our results clearly show that the BoJ's interventions can be deemed effective. We show that purchases (sales) of dollars are reflected by an increase (decrease) in the first moment — the JPY/USD forward rate, which is consistent with previous evidence by Fatum and Hutchison (2006). We also show that interventions have clear and significant effects on skewness, in line with the direction of interventions. This result, which is in sharp contrast with Galati and Melick (1999) and Galati et al. (2005) ones, is important as it shows that interventions have not only direct effects on the level of the exchange rate but also orientate expectations towards future changes in the same direction. In line with previous literature (Beine, 2003, Beine et al., 2003 and Dominguez, 2006), we also find that results are ambiguous regarding volatility and depend on the horizon, the direction of intervention and the simultaneous release or not of other news (as measured via stock market volatility). Conversely, kurtosis appears to be insensitive to interventions. Several extensions of this work could be considered. First, it would be interesting to use other methods to estimate moments. In particular, parametric measures could be proposed, such as for example for skewness via the estimate of asymmetrical Student distribution (Hansen, 1994). Second, we have restricted this study to the first four moments. It could be interesting to test the modification of the RND as a whole. Third, one could also try to investigate the sensitivity of the results to recent aspects of Japanese interventions and notably the questions of sterilization (Fatum and Hutchison, 2004) and secrecy of interventions (Beine and Lecourt, 2004 and Gnabo and Lecourt, 2004).