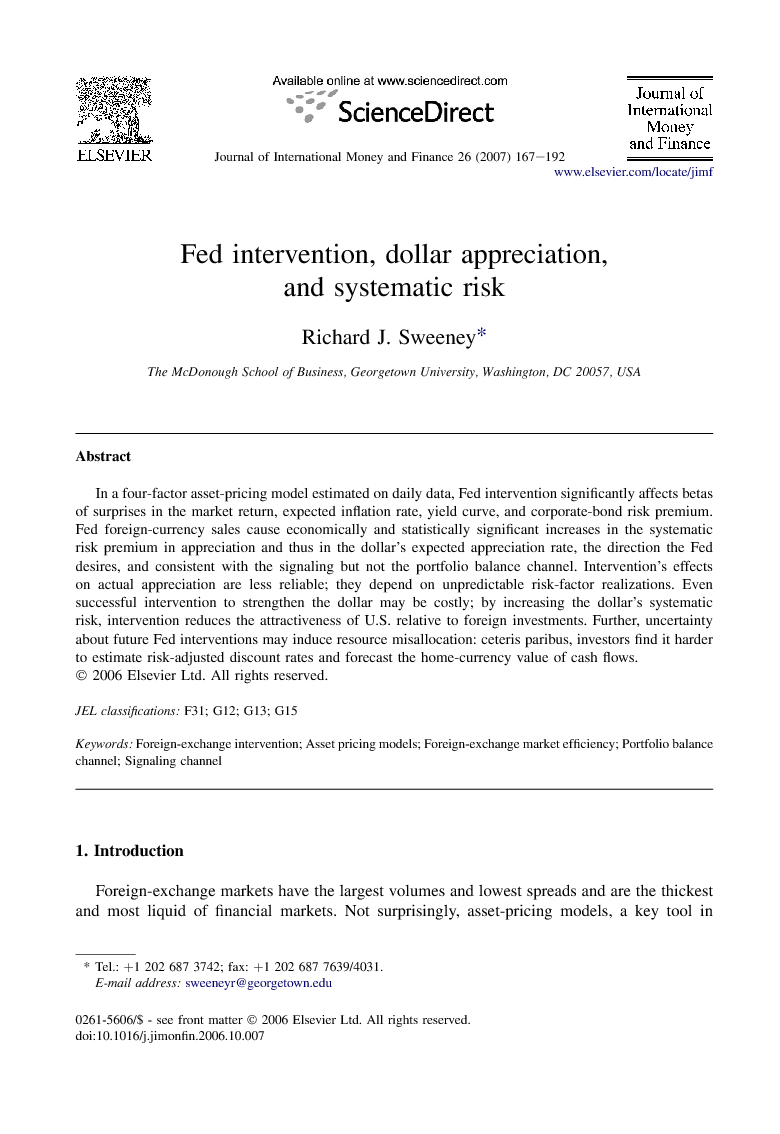 In a four-factor asset-pricing model estimated on daily data, Fed intervention significantly affects betas of surprises in the market return, expected inflation rate, yield curve, and corporate-bond risk premium. Fed foreign-currency sales cause economically and statistically significant increases in the systematic risk premium in appreciation and thus in the dollar's expected appreciation rate, the direction the Fed desires, and consistent with the signaling but not the portfolio balance channel. Intervention's effects on actual appreciation are less reliable; they depend on unpredictable risk-factor realizations. Even successful intervention to strengthen the dollar may be costly; by increasing the dollar's systematic risk, intervention reduces the attractiveness of U.S. relative to foreign investments. Further, uncertainty about future Fed interventions may induce resource misallocation: ceteris paribus, investors find it harder to estimate risk-adjusted discount rates and forecast the home-currency value of cash flows.

Foreign-exchange markets have the largest volumes and lowest spreads and are the thickest and most liquid of financial markets. Not surprisingly, asset-pricing models, a key tool in understanding financial markets, are often applied to foreign exchange markets. Perhaps surprisingly, however, this is the first paper to use a multi-factor APM to analyze how government intervention affects expected appreciation. Instead, many previous papers that test for intervention effects on expected appreciation use portfolio balance or signaling models. It is difficult to interpret previous papers' results in terms of asset-pricing models. These papers omit the APM channels through which intervention affects expected appreciation—by changing appreciation's betas on risk factor realizations or by changing economy-wide risk premia. This paper focuses on intervention effects on appreciation's betas; in estimating equations, betas are conditioned on intervention variables. Because the data support APM specifications, previous estimating models are likely misspecified, causing bias and inefficiency, as shown below. Previous papers' empirical results are mixed: many papers find no, small or statistically weak relationships, but others find stronger relationships. This paper reports strong and robust relationships: estimates show that Fed sales of foreign currency, or purchases of dollars, on average increase the dollar's expected appreciation rate, the direction the Fed desires. The sign of intervention's effect is consistent with the signaling channel, but inconsistent with the portfolio balance channel. Foreign currency sales “work” by increasing the systematic risk premium in dollar appreciation. Thus, the estimated equations explain how intervention jointly affects expected appreciation and systematic exchange-rate risk, the foreign-exchange risk that matters to diversified decision-makers. These results on systematic risk complement previous investigations of intervention effects on total risk, on implied volatility in currency options, and on bid-ask spreads in currency quotes. Equations are estimated for daily data on Fed intervention in Deutsche marks and Japanese yen. Four risk factors are used: surprises in the rate of return on the market, and in the inflation rate, yield curve and risk premium in corporate bonds, analogues of factors in APM equity- and bond-market studies. Intervention has statistically significant effects on market betas in all specification, and has statistically significant effects on betas of non-market factors in many specifications. Intervention effects on expected appreciation are economically significant. For example, in any sample period each factor's beta has a minimum and maximum as a function of intervention. Suppose that each factor's realization rises, one at a time, by one standard deviation. The effect on appreciation depends on the betas; across the four factors, appreciation is larger at the maximum than the minimum beta by 2.08–2.75%/year for the DEM and by 1.70–4.32%/year for the JPY. Intervention effects on expected dollar appreciation are reliable. In APMs, intervention effects on actual appreciation depend on betas and also on risk-factor realizations; in the face of adverse factor realizations, intervention may be counterproductive by intensifying depreciation. Uncertainty about the actual effects of intervention may help to explain the reluctance of many central banks to intervene since the early 1990s, as compared to the 1980s. Further, even successful intervention may be costly, intervention that strengthens the dollar works by increasing the dollar's risk premium. Ceteris paribus, the required rate of return increases for investments with dollar risk, and foreigners invest less in the U.S. Similarly, U.S. investors face reduced exchange-rate risk abroad—the foreign-currency risk premium is the negative of the dollar's for this paper's log exchange rates—and thus invest more abroad, less in the U.S. Further, the unpredictability of Fed intervention tends to harm resource allocation: ceteris paribus, both U.S. and foreign investors find it more difficult to estimate future currency betas for use in risk-adjusted discount rates, and to forecast the home-currency value of cash flows. Section 2 shows how this paper is related to the literature, and Section 3 discusses how intervention affects expected appreciation in APMs. The data are discussed in Section 4. In Section 5, test results show that Fed foreign currency sales cause statistically and economically significant increases in dollar appreciation's systematic risk and thus in expected appreciation. In tests in Section 6, the data cannot reject the joint null that the exchange market is strong-form efficient relative to intervention, and that non-market-factor risk premia make zero net contribution to intervention's effect on expected appreciation. Section 7 offers some conclusions.