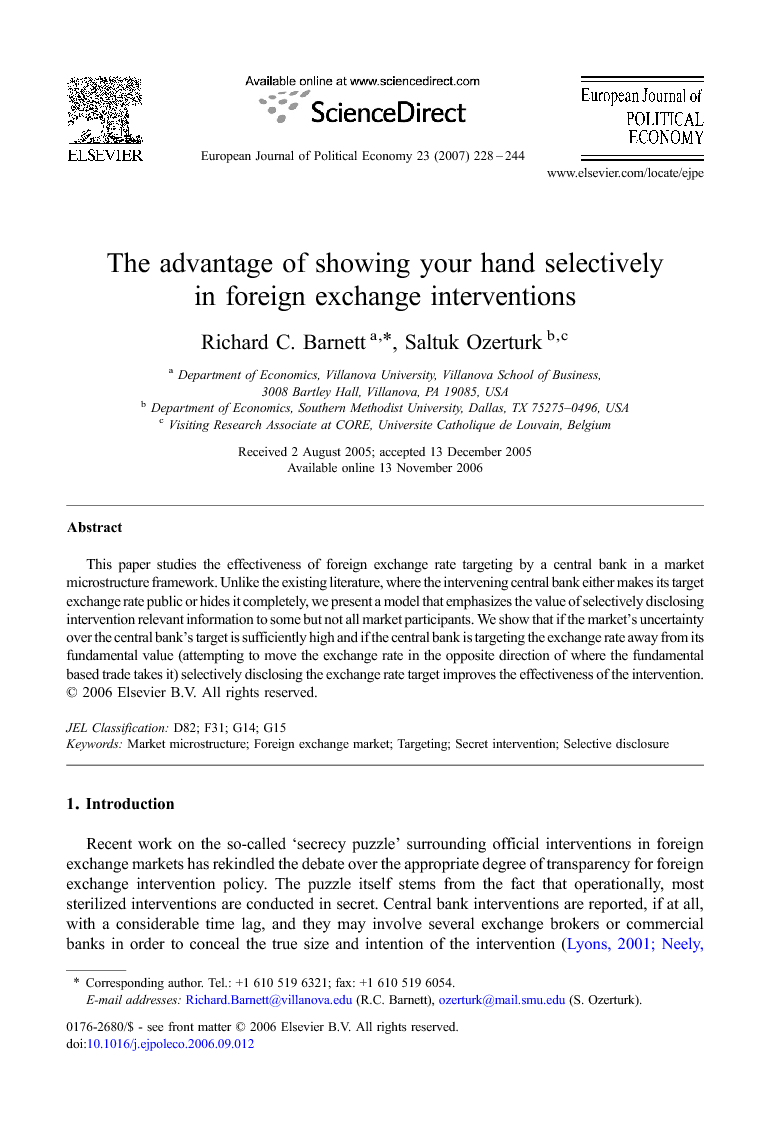 To summarize, the main contributions of the paper are as follows: (i) Unlike the existing literature, we consider an intervention regime where the central bank is not restricted to disclose the target to all or keep it secret from all. The possibility of disclosing the target to some but not all market participants (selective disclosure) is clearly a practical policy alternative to be considered. (ii) In a framework where a publicly known target renders intervention as ineffective, we show that too much market uncertainty on the target also undermines effective intervention. If the market is highly uncertain about the central bank's target, the equilibrium price impact of a given order flow is low and this makes it more difficult for intervention to work. Therefore, we point out that too much secrecy may not be the best intervention strategy either. (iii) We characterize the circumstances under which selective disclosure is the preferred intervention regime in terms of better targeting.14 We explore the price impact channel (i.e., the equilibrium response of the market price to the total order flow) and show that price impact under selective disclosure is always higher relative to complete secrecy. Since selective disclosure mutes some of the fundamental based order flow, the bank can achieve better targeting with complete secrecy when it is trying to move the exchange rate in the same direction as the market fundamental trade flow (target toward the fundamental). On the other hand, if the central bank is targeting away from the fundamental value, selective disclosure achieves better targeting when the public uncertainty on its target is high enough. Our analysis also emphasizes that information sharing between the central banks can be a good policy alternative for intervention, even if this communication does not involve a subsequent concerted and cooperative play. We should preface that intervention during currency crises differ substantially from the type of interventions considered here and in Vitale (1999) and Bhattacharya and Weller (1997). Crises typically emerge when market participants believe that a country is unable to maintain a fixed exchange rate. In this context, the central bank's target (the fixed exchange rate) is known by all market participants — what is not known by the market is the bank's stock of foreign reserves. In defending the exchange rate, a central bank may forgo its usual sterilization procedures in order to send a more convincing statement to the market. These may include a variety of policy initiatives that play a fundamental role in determining the banks reserves — one of the last, of course, being a change in the exchange rate. By contrast, one may think of interventions in the Vitale model as part of a normal operating procedure of the bank; the bank has sufficient foreign reserves, and the exchange rate–though targeted–is not fixed by the bank. The intervention practices of the Bank of Japan for the last quarter century seem to best fit this description. One broader implication of our work centers on the policy alternatives available to a central bank when it wants to reduce some of the uncertainty surrounding its target.15 The bank can adjust the market's priors and reduce the variance of its target directly, by making public pronouncements about its target before trades commence. Alternatively, it can reduce the variance selectively (and in our case, to zero), for some but not all market participants. The bank will, presumably, need to reveal more information selectively to an informed trader than it would reveal publicly in order to achieve the same targeting effect. Both require that the information the bank relays is credible. Arguably, it should be easier for the bank to convey its true intentions to a portion of the market only, especially if such communications are limited to other central banks. Moreover, transmitting noisy messages publicly is a blunt, and potentially more costly, approach. For example, the central bank may run the risk that its message is confused by the general public with other aspects of its monetary policy, thereby affecting the market's priors on the fundamental itself. In the event that this occurs, it may be difficult if not impossible for the bank to retract its pronouncements, which will, no doubt, come at considerable cost to the bank's reputation. Missing here, as in much of the microstructure literature, is a clear connection between exchange rate interventions strategies and the broader concerns of monetary policy. This remains an important and potentially fruitful area for future research.