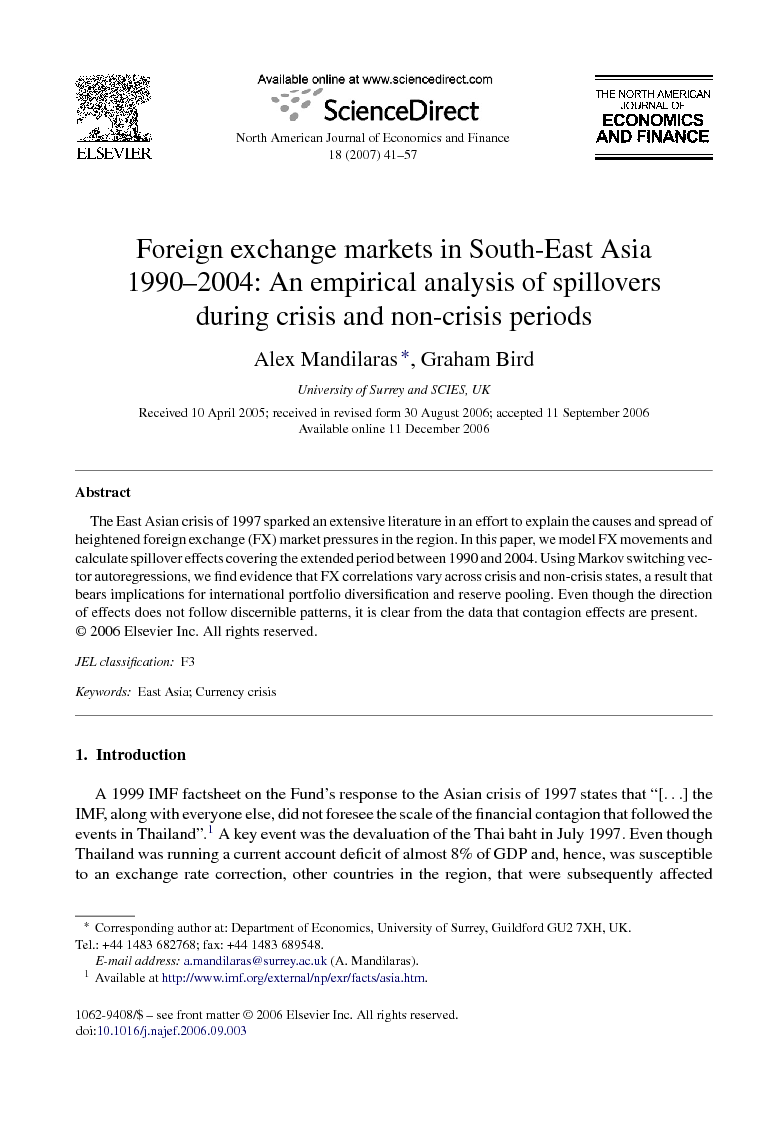 The East Asian crisis of 1997 sparked an extensive literature in an effort to explain the causes and spread of heightened foreign exchange (FX) market pressures in the region. In this paper, we model FX movements and calculate spillover effects covering the extended period between 1990 and 2004. Using Markov switching vector autoregressions, we find evidence that FX correlations vary across crisis and non-crisis states, a result that bears implications for international portfolio diversification and reserve pooling. Even though the direction of effects does not follow discernible patterns, it is clear from the data that contagion effects are present.

A 1999 IMF factsheet on the Fund's response to the Asian crisis of 1997 states that “[…] the IMF, along with everyone else, did not foresee the scale of the financial contagion that followed the events in Thailand”.1 A key event was the devaluation of the Thai baht in July 1997. Even though Thailand was running a current account deficit of almost 8% of GDP and, hence, was susceptible to an exchange rate correction, other countries in the region, that were subsequently affected by speculative attacks in the foreign exchange market were not experiencing equivalently large external imbalances at the time. The region's impressive GDP growth rates in the early 1990s had earned the countries the title ‘Asian tigers.’ With a reputation for fiscal prudence and reasonably low inflation, it seemed that little threatened their continued economic advance. With the liberalization of capital accounts, new foreign money was channelled into the South-East Asian economies mainly through the banking system. However, a combination of asymmetric information and moral hazard problems led to excessive borrowing (e.g., Mishkin, 1999; Corsetti, Pesenti, & Roubini, 1999). An underestimation of the risks, both by bank managers and international investors, meant that several firms were burdened with substantial amounts of foreign currency short-term debt. This constituted a serious problem, as most firms’ earnings were in local currency, an imbalance that seriously exposed them to the risk of devaluation. So, the source of the Asian crisis was not related to the macroeconomic fundamentals, but rather to the inability of the private sector to allocate funds to the most productive uses through an appropriate assessment of risks. In other words, the region's problem was structural in the sense that financial market regulation, supervision and management were inadequate. The real effects of the crisis were painful, as growth rates in the region were adversely affected. Related speculative pressures in the FX markets eventually led several governments to abolish their currency pegs (at least temporarily) and, as a result, the region's currencies depreciated sharply—a possible reason for the resumption of positive growth rates relatively soon after the crisis. Since these events took place, a substantial amount of research has examined the mechanisms through which the crisis was dispersed among countries in the region. This paper covers similar ground, but uses recently devised econometric tools. It also exploits a more complete set of data running up until 2004. This allows comparisons to be made between crisis and non-crisis periods. More specifically, the paper addresses a number of research questions. First, is the relationship between currencies as measured by exchange rates different from that between wider FX market pressure indicators? If so, this suggests that different countries may respond to spillover effects in different ways, with some allowing the exchange rate to take the strain of adjustment and others opting for rising interest rates and/or reserve decumulation. Second, does the relationship (the extent and nature of the spillovers) differ between crisis and non-crisis periods? This is an important question for the risk management of internationally diversified portfolios. If the relationship changes, then what might be sensible behavior before a crisis may not be as sensible during (or after) it. Third, are contagion effects present in South-East Asian FX markets and, if yes, which countries are the sources and which the recipients? The paper is empirical. We do not seek to impose and test any particular model. However, the relationships we examine are informed by the relevant theory. Thus, before moving on to examine the empirical evidence, we attempt to place our empirical research in the context of existing analysis of economic and financial crises and contagion. This is done in Section 2. Section 3 presents the data and discusses the empirical work. Sections 4 and 5 adopt a Markov-switching regression framework to analyze the regime-dependent behavior of nominal exchange rates and a FX market pressure indicator. Section 6 deals with contagion issues and Section 7 concludes.

In this paper, we have used recent advances in econometric techniques to answer questions about the interrelationships between South-East Asian foreign exchange markets during the period 1990–2004 with a view to gaining a better understanding of a number of issues to which the recent literature directs us. South-East Asia is particularly interesting, given the opportunity to examine countries that are frequently and somewhat loosely classified together, as well as the transition sequence from periods that may be characterized as non-crisis to crisis and back to non-crisis. As we anticipate from our consideration of the relevant theory, we find that the pattern of spillovers varies across countries in the region in terms of their effects on exchange rates, interest rates and reserve levels. This implies that monetary authorities respond in different ways to FX market pressures. Some are less prepared to see currency depreciation than others, even in the context of crises. However, in this paper we do not explore in detail what accounts for these differences, although we do briefly discuss possible explanations. We also find that there are significant differences in the strength of spillovers, suggesting that contagion is not simply a matter of regionalization. This finding could, however, be consistent with a number of potential explanations involving different degrees of interdependence, capital market imperfections, and vulnerability to crisis. Further research would be needed to tease out the relative importance of these factors in explaining the different spillover patterns observed in the region. In this paper, we do discover that the pattern of correlations between countries sometimes varies across crisis and non-crisis periods, even though not dramatically. Importantly, some types of diversification that may be risk-reducing during a non-crisis period may not be risk-reducing during a crisis. This finding also suggests that reserve pooling arrangements that depend on negative correlations among participants may be ill-informed if non-crisis periods are used to identify correlations that are, in practice, contingent on whether crises exist. In short, the findings reported here counsel against simplistic analyses of contagion. Even at the regional level, the nature of spillovers is quite complex and the responses to them are diverse. We are, therefore, able to reject stories that emphasize uniformity. However, at this stage we are only offering potential explanations of the diversity we observe. The next stage in research is to seek a richer and evidence-based explanation of these differences.