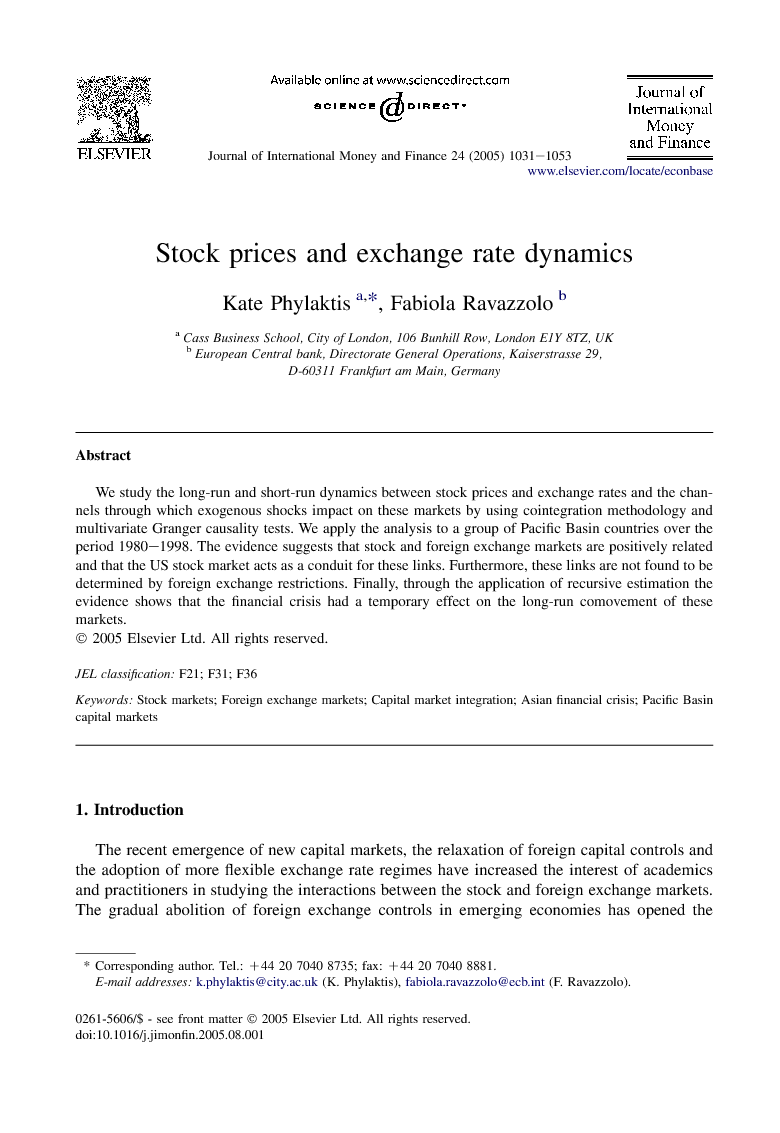 We study the long-run and short-run dynamics between stock prices and exchange rates and the channels through which exogenous shocks impact on these markets by using cointegration methodology and multivariate Granger causality tests. We apply the analysis to a group of Pacific Basin countries over the period 1980–1998. The evidence suggests that stock and foreign exchange markets are positively related and that the US stock market acts as a conduit for these links. Furthermore, these links are not found to be determined by foreign exchange restrictions. Finally, through the application of recursive estimation the evidence shows that the financial crisis had a temporary effect on the long-run comovement of these markets.

In this paper, we have examined the long-run and short-run dynamics between stock prices and exchange rates in a group of Pacific Basin countries. Our main concerns were to examine whether these links were affected by the existence of foreign exchange controls, and by the Asian financial crisis of mid-1997. The following conclusions have been derived from our analysis. First, our analysis has shown that the US stock market is an important “causing” variable, which acts as a conduit through which the foreign exchange and the local stock markets are linked. This casts doubts on the inferences of previous studies, which did not include the influence of world markets. Secondly, foreign exchange restrictions have not been found to be an important determinant of the link between the domestic stock and foreign exchange markets on the one hand, and between the domestic capital and world capital markets on the other hand. Free capital flow is not sufficient for international investment, access to market information could also be important. Links between markets can be fostered through other channels. This latter result supports the evidence presented in other studies (see e.g. Phylaktis, 1997 and Phylaktis, 1999), which have found for the shorter end of financial instruments that there is substantial capital market integration between the Pacific-Basin Region and US during the 1990s even for countries with extensive foreign exchange controls. The open character of these economies in terms of exports and imports and the substantial trade with US provides a possible explanation for these results. A country's external trade to another country measures the degree of economic integration between them and the degree of how much the two economies' cash flows are intertwined. Thus, financial integration can be closely related to economic integration. In addition, the analysis has provided evidence that Country Funds offer a way to foreign investors for accessing local markets and increasing their integration with global markets even in the presence of foreign exchange restrictions. Our results are at variance with Bekaert et al. (2002), who have also made an attempt to date the integration of emerging markets with world markets by looking for a common break in the process generating the financial time series, which are likely to be related to the integration process. They included three of the countries in our sample, Malaysia, Philippines and Thailand. For Malaysia, the breaks found are much later than either the official liberalisation date or the introduction of the FCF.23 For Philippines, the dividend yield series presents the earliest break and is very close to the FCF date, while for Thailand US equity flows to market capitalisation has the earliest break and is close to the official liberalisation date. A possible explanation for the different results between our study and Bekaert et al. (2002) might be the fact that our analysis is done within a better defined framework. Thirdly, the results of the multivariate causality tests indicate that on the whole, the US stock market drives the system confirming the influence of the US on these economies. They also show the channel through which this influence brings together the foreign exchange and local stock markets. The channel has been found not to be connected to the degree of stock market openness. Finally, the parameter constancy tests indicate that the increase in the parameters during the height of the Asian crisis was short lived and confirm that Thailand was badly affected. These results are in agreement with other studies which have studied the October 1987 crash and found that intermarket relationships intensified for a brief period around the crash, but then quickly resumed their normal pre-crash period relationship. In conclusion, our analysis has indicated a close association between stock and foreign exchange markets, which has implications for exchange rate policies. The positive association between the stock market and the real exchange rate implies that the degree of exchange rate flexibility has a role to play in that relationship. Our analysis also casts doubts on the use of foreign exchange restrictions for the purpose of isolating the domestic capital markets from world influences. The establishment of country funds by providing investors a means for entering otherwise restricted emerging markets fosters their integration with world markets. At the same time, the general increase in international trade and the resultant increase in economic integration might have also strengthened financial integration even in the presence of restrictions.