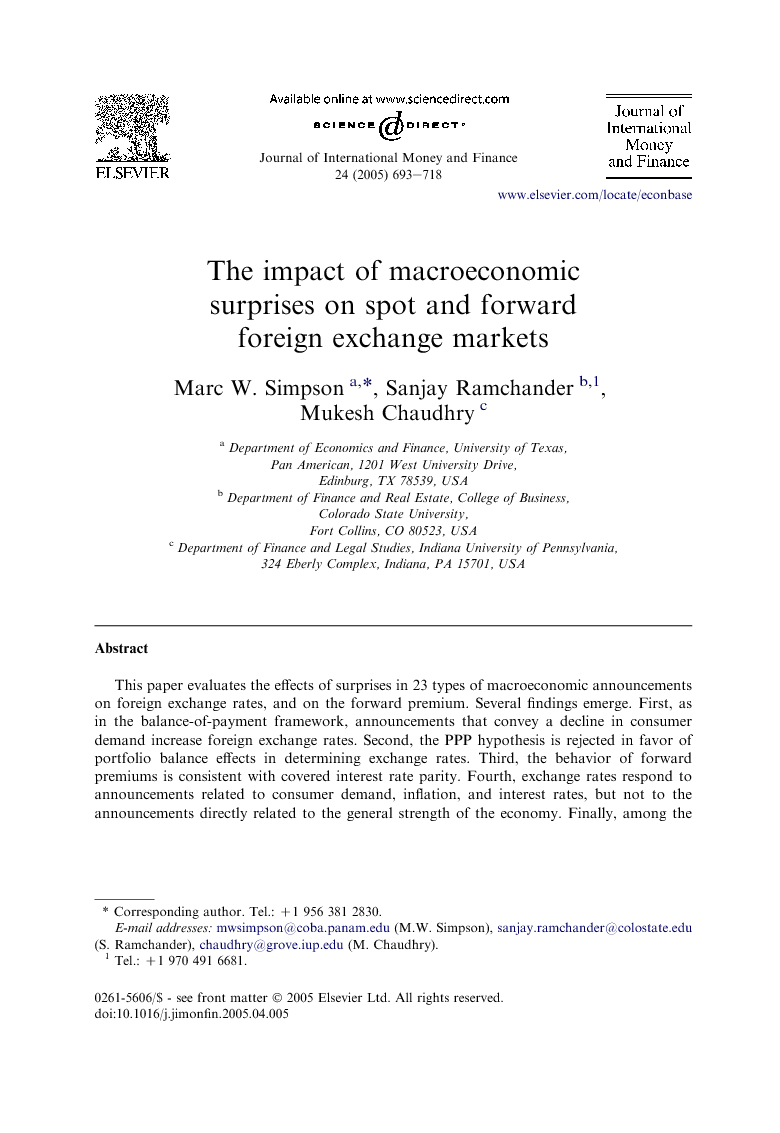 This paper evaluates the effects of surprises in 23 types of macroeconomic announcements on foreign exchange rates, and on the forward premium. Several findings emerge. First, as in the balance-of-payment framework, announcements that convey a decline in consumer demand increase foreign exchange rates. Second, the PPP hypothesis is rejected in favor of portfolio balance effects in determining exchange rates. Third, the behavior of forward premiums is consistent with covered interest rate parity. Fourth, exchange rates respond to announcements related to consumer demand, inflation, and interest rates, but not to the announcements directly related to the general strength of the economy. Finally, among the news releases considered, surprises in the Treasury budget, trade balance and capacity utilization have the strongest influence in the currency market.

An empirical study of the effect of macroeconomic surprises on foreign exchange markets offers an excellent opportunity to test and clarify several fundamental theories in international finance. Such theories as purchasing power parity (PPP), covered interest rate parity (CIP), and the international Fisher effect (IFE) are all, internally-consistent, compelling models of exchange rate determination. In addition, Mundell–Fleming type models of adjustment in a large open economy posit balance of payment (BOP), and portfolio balance (PB) explanations for exchange rate movements. While there exists a broader tension and consistency among many of these theories, others appear to be at odds with one another. In the development of a unified theory of international exchange, it is necessary that these hypotheses, each of which contains merit in its own right, fit into a broader, cohesive whole. What is more, it is precisely when theories appear ambiguous or contradictory that one must look to empirical examination for clarification. While the clarification of hypotheses in international financial theory may seem purely academic, it is perhaps a false dichotomy that separates theory from practical utility. Policy makers in governments, central banks, and the private sector can all gain from a deeper understanding of how forward and spot exchange rates react to unanticipated news. It could be of immense benefit to know, for example, whether an unexpected increase in the Consumer Price Index (CPI) tends to cause a devaluation in the currency, á la the PPP hypothesis, or if such an increase in CPI tends to raise domestic interest rates as per the Fisher effect, leading to a capital inflow and a currency appreciation as conjectured by the PB hypotheses. The main goal of this paper is to shed light on the various theories of exchange rate determination. Specifically, we examine the reaction of spot and forward exchange rates, as well as the forward premium, of five currencies against the U.S. dollar, to the release of 23 types of periodic U.S. macroeconomic news. The announcement variables are chosen based on their information content and their expected association with exchange rate determination and variability. News about macroeconomic variables are defined as the difference between the actual values of the fundamentals and what market participants expected the fundamentals to be before they were announced. From a methodological standpoint, given the equilibrium nature of the relationship between spot and forward exchange rates, our analysis is conducted within a vector error correction model (hereafter, VECM), and importantly, employs pooled estimation techniques. This current study adds to the literature in five significant ways. First, the time frame under consideration is the largest of any study known to the authors. Our data set covers the time period from January 1, 1990 to September 7, 2000, over 10 years of daily observations. This is important for accurately measuring long-run effects. Second, the authors know of no other paper that examines the impact of so many types of macroeconomic announcements on foreign exchange markets. Third, we not only examine the response of the spot market to macroeconomic news, but we consider the forward market's reaction as well. The interaction between spot and forward exchange rates as they respond to macroeconomic announcements may be able to provide additional information on the forward premium—and hence, on international interest rate differentials—than would be possible otherwise. Fourth, by use of a VECM we are able to control for both the long-run and short-run time series dynamics of the spot and forward rates, thereby presenting a clearer picture of the impact of each announcement. Fifth, the pooling of exchange rates against the dollar allows us to develop an overall picture of how the currency market, in general, revises the foreign exchange value of the U.S. dollar, given a surprise in each of the macroeconomic variables. We find that the daily change in spot foreign exchange rates is significantly influenced by surprises in 10 of the 23 types of announcements. The daily change in forward rates is also significantly impacted by 10 of the 23 types of announcements (spot and forward rates have nine of the significant surprises in common). The impact of six of the announcements is sufficiently different on the forward versus the spot rate so as to have a significant effect on the forward premium. The significance of these results is evaluated in light of several economic theories that are commonly used to explain exchange rate movements. Section 2 of the paper discusses the academic literature related to the relationship between fundamental economic activities and currency markets. Section 3 describes the data used in the present analyses. Section 4 proposes the overall theoretical framework necessary in categorizing macroeconomic announcement variables, and provides an economic basis for evaluating our results. Section 5 details the econometric methodologies employed in the study. Section 6 presents a discussion of the results. Finally, Section 7 concludes the paper.

The issue of the links between macroeconomic fundamentals and exchange rates is a perennial source of concern and investigation, more so with the advent of the flexible exchange rate system. The purpose of this paper is to test the probity of several related theories of exchange rate determination by analyzing the impact of macroeconomic surprises on the spot and forward exchange rates, and on the forward premium. The surprise component is constructed by using consensus estimates of 23 types of periodic macroeconomic announcements along with the actual value of the fundamentals. The empirical investigation is undertaken in a theory-consistent manner that controls for the long-run equilibrium relationship between the spot and forward exchange rates. The focal point of our analyses is the estimation of a pooled vector error correction model that, exogenously, introduces a vector of macroeconomic surprises. The pooled estimation results demonstrate how market participants process new information about macroeconomic fundamentals in influencing the overall value of the U.S. dollar vis-à-vis foreign currencies. Several important results are documented. First, as far as the linkages between forward and spot exchange rates are concerned, we find them to share a mutually reinforcing long-run equilibrium relationship with each other. An examination of the short-run dynamics indicates significant feedback relationships between the spot and forward currencies. Importantly, it is the forward rate that accommodates shocks in spot rates in order to maintain the cointegrating relationship. Second, the study sheds light on several competing theories of exchange rate determination. Consistent with the Mundell–Fleming balance-of-payment framework, announcements that convey an unexpected decline in consumer demand increase both the spot and forward exchange rates. In support of this argument, for instance, we find that a surprise improvement in the trade balance, which is indicative of a decline in consumer demand, is positively related to the U.S. dollar exchange rate. Contrary to the PPP hypothesis, inflation related news items such as CPI and Hourly Earnings are found to increase the value of domestic currency. A plausible explanation for the rejection of the PPP is that the countervailing short-term capital flow movements that take place within a portfolio balance context dominate the supply and demand adjustments in the currency market. We also study the behavior of forward premiums in response to macroeconomic surprises and find them to be in accordance with the CIP hypothesis. Macroeconomic announcements such as an increase in Durable Goods Orders and Personal Consumption place an upward pressure on domestic interest rates that in turn results in the decline of the forward premium. Finally, the study reports the relative importance of several types of macroeconomic surprises on spot and forward exchange rates. Spot and forward rates, themselves, register far more reactions to announcements that convey information about consumer demand, inflation, and interest rates, and almost no reaction to news about the overall strength of the economy, while the forward premium reacts to announcements in all four classifications. Among the individual announcement types, announcements conveying information on the Treasury Budget, Trade Balance and Capacity Utilization elicit the greatest attention in the exchange rate market. Several extensions to this work are worth considering. For instance, it would be useful to account for the surprise component in foreign economies in order to gain greater insight into the issue of exchange rate determination. It will also be interesting to examine how sensitive our results are to the time period under investigation. These topics are left for future exploration.