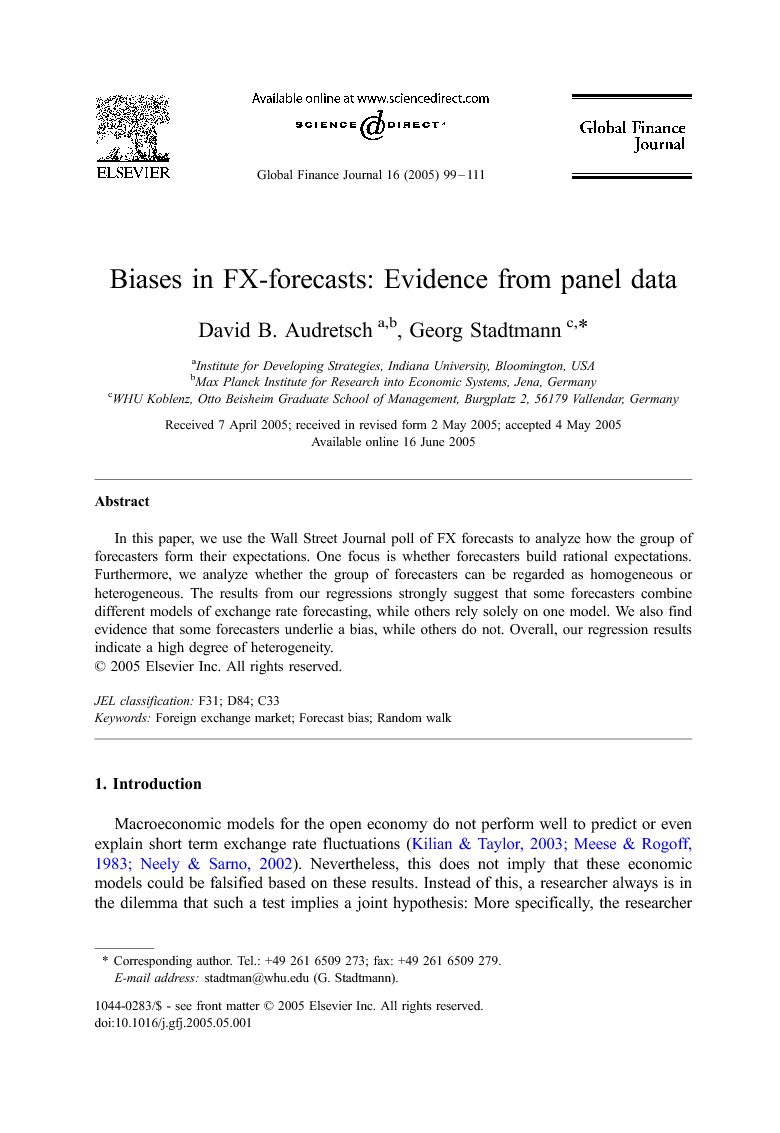 In this paper, we use the Wall Street Journal poll of FX forecasts to analyze how the group of forecasters form their expectations. One focus is whether forecasters build rational expectations. Furthermore, we analyze whether the group of forecasters can be regarded as homogeneous or heterogeneous. The results from our regressions strongly suggest that some forecasters combine different models of exchange rate forecasting, while others rely solely on one model. We also find evidence that some forecasters underlie a bias, while others do not. Overall, our regression results indicate a high degree of heterogeneity.

Macroeconomic models for the open economy do not perform well to predict or even explain short term exchange rate fluctuations (Kilian & Taylor, 2003, Meese & Rogoff, 1983 and Neely & Sarno, 2002). Nevertheless, this does not imply that these economic models could be falsified based on these results. Instead of this, a researcher always is in the dilemma that such a test implies a joint hypothesis: More specifically, the researcher cannot distinguish whether the underlying macroeconomic model is false or financial agents do not build rational expectations. Another characteristic of the traditional macroeconomic models is that the agents are always modeled as a homogeneous group. However, this view is in sharp contrast to the empirical findings of several surveys conducted among foreign exchange rate traders (e.g., Allen & Taylor, 1990 and Menkhoff, 1997).1 Survey studies on the behavior of foreign exchange traders examine the relative importance traders attach to technical analyses2 versus fundamental analyses over different forecasting horizons. The outcome of all these studies is that many foreign exchange traders rely on technical analyses or technical instruments when forming their expectations for short horizons. By contrast, they rely more on macroeconomic fundamentals when forming their expectations for longer horizons. Since the beginning of the 1990s, researchers have departed from the representative agent model, implementing different groups of financial agents which form heterogeneous expectations. For example, DeGrauwe, Dewachter, and Embrechts (1993) and Westerhoff (2003) experiment with fundamentalist and chartists, DeLong, Shleifer, Summers, and Waldmann (1990) incorporate rational agents, informed traders as well as positive feedback traders in their so-called noise trader models. This noise trader framework was recently used by Jeanne and Rose (2002) in a macroeconomic setting. In this paper, we use the Wall Street Journal (WSJ) poll to shed light on the question whether financial agents indeed build rational expectations or whether biases exist that deter the expectation formation process. Furthermore, we investigate whether the group of forecasters can be characterized as a homogeneous or heterogeneous group. The main advantage of the data set under consideration is that we can observe exchange rate expectations of a large number of individual forecasters and not only the mean or median of a group of forecasters. This feature allows us to analyze not only the time series characteristics but also the cross-sectional characteristics of the data set. Hence, we can apply panel econometric methods. The observability of individual expectations distinguishes the WSJ data set from e.g. the Reuters data set, used by Leitner, Schmidt, and Bofinger (2003). Furthermore, the WSJ data set has been existing over a relatively long time period (1989–2003). For example, the study of Ito (1990) – who also operates with individual data – covers only the time period May 1985–June 1987. Hence, the time dimension in Ito (1990) is limited to a 2-year horizon.3 The remainder of the paper is structured as follows. In the next section we characterize the WSJ data set. In Section 3 we test whether exchange rate expectations are consistent with the rational expectation hypothesis. Furthermore, we check whether forecasters are able to beat a naive random walk forecast on average. In Section 4 we test for an exchange rate expectation formation process which is in line with the extrapolative, adaptive, or regressive expectations hypothesis. Section 5 summarizes and concludes.

In this paper we use the Wall Street Journal poll among economists to examine whether economists forecast exchange rate rationally. Furthermore, we investigate whether the group of forecasters is homogeneous or rather heterogeneous. Overall, our regression results indicate a high degree of heterogeneity: The fixed effects model with individual constants for each group is superior to a pooled OLS model with a common constant. Additionally, our empirical results clearly show that the assumption of a constant slope coefficient among all forecasters has to be rejected. Therefore, we run individual regressions for each forecaster over time. The results from these regressions strongly suggest that some forecasters combine different models of exchange rate forecasting, while others rely solely on one model. These findings carry importance for macroeconomic modeling: The assumption of rational agents forming homogeneous expectations is not supported by our results.