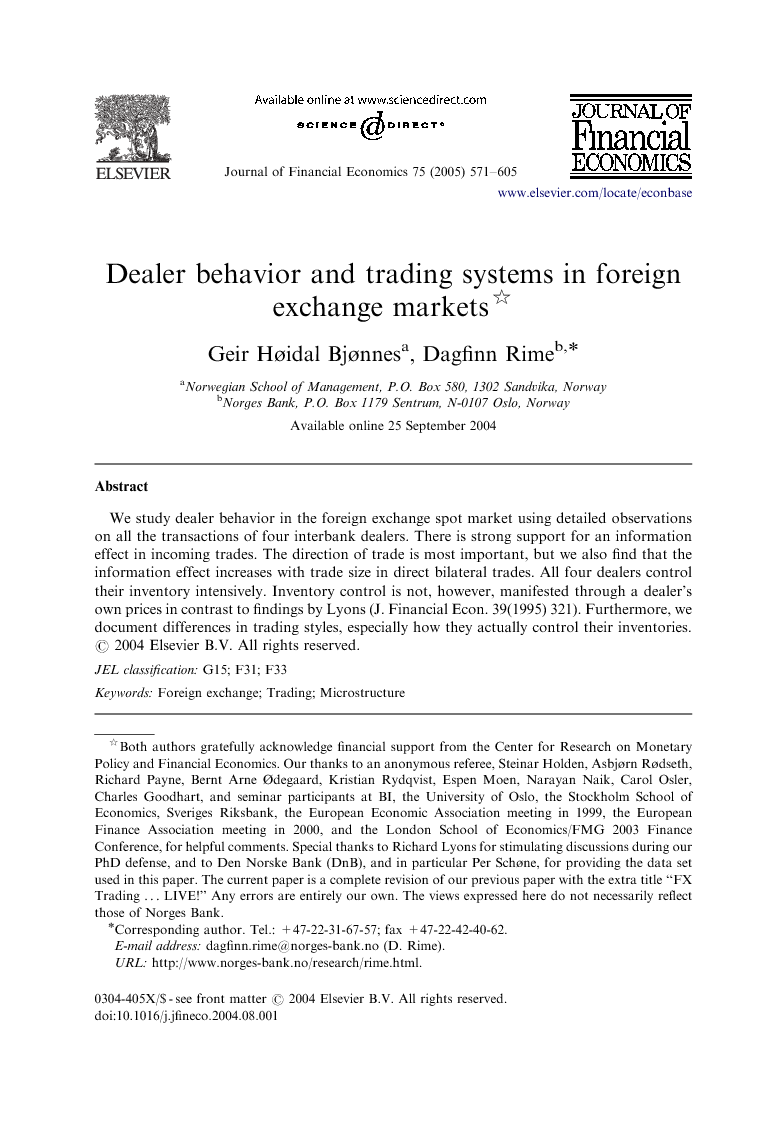 We study dealer behavior in the foreign exchange spot market using detailed observations on all the transactions of four interbank dealers. There is strong support for an information effect in incoming trades. The direction of trade is most important, but we also find that the information effect increases with trade size in direct bilateral trades. All four dealers control their inventory intensively. Inventory control is not, however, manifested through a dealer's own prices in contrast to findings by Lyons (J. Financial Econ. 39(1995) 321). Furthermore, we document differences in trading styles, especially how they actually control their inventories.

This paper studies the behavior of four interbank spot foreign exchange dealers using a detailed data set for the week March 2–6, 1998, with transaction prices, trading quantities, dealer inventories, exact timing, and information regarding the trading system used for the transactions. The four dealers trade in different exchange rates and have different trading styles. Using our data, we study whether dealers set prices to protect against private information and how they control inventory to adjust their risk exposure. In a widely cited paper, Lyons (1995), using data from 1992, finds support for both information and inventory effects in the pricing of an FX dealer. Using a version of the Madhavan and Smidt (1991) model, Lyons finds, consistent with the model predictions, that the dealer increases his spread with trade size to protect against private information, and adjusts the midpoint in the spread (quote shading) to induce trade in a preferred direction to adjust inventory. Using the same model as Lyons for our dealers, we find no support for the types of information and inventory effects predicted by that model. Our results suggest that the Madhavan and Smidt model may not be as applicable to foreign exchange trading as first believed because of differences in trading styles among the dealers. A likely explanation is the change in the trading environment caused by the introduction of electronic brokers. The dealer tracked by Lyons may have been playing an interdealer risk-sharing role that the electronic brokers have come to dominate. Using an indicator model (the Huang and Stoll (1997) model), we show that private information is indeed important in the FX market. For DEM/USD, we find that private information is responsible for as much as 80% of the effective spread in the interdealer market. For NOK/DEM, roughly 50% of the effective spread is explained by private information. The finding that cumulative order flows and prices are cointegrated is also consistent with order flow as a carrier of information. Interestingly, we find strong evidence of mean reversion with half-lives of dealer inventories that range from less than one minute to fifteen minutes. However, little of this is manifested through dealers' own prices as predicted by the inventory models. We show how the dealers control their inventories and how different types of positions contribute to their overall profitability. In doing this we distinguish between three types of trades. We find that customer trades are highly profitable. This business is particularly important for the NOK/DEM Market Maker in our sample. The dealers also earn money from their direct incoming trades and from actively establishing positions through electronic brokers. Active position taking seems to represent an important share of the trading for three of the dealers. The dealers provide liquidity by submitting limit orders on electronic broker systems, and may thus earn money from the bid–ask spread. Or they submit market orders to establish speculative positions. Hence, the dealers do not use the interdealer market only to off-load unwanted positions from their direct incoming trades and customer business. For two of the dealers, we find that the share of outgoing trades is higher when they establish a position than when they unwind the same position. This finding may suggest that these dealers submit market orders when they have information. This paper is, to our knowledge, the first to provide strong and detailed evidence that (at least some) FX dealers engage in information-based speculation. This kind of behavior is also consistent with the standard signing convention that we use for the electronic broker trades. As mentioned, electronic brokering has become the dominant tool for interdealer trading since its introduction at the end of 1992. Interestingly, we do not find evidence that the price impact from direct trades is different from the price impact of electronic broker trades, in contrast to the results of Reiss and Werner (2002) for the London Stock Exchange. This may suggest that (at least during the week we study) electronic brokers can provide “sufficient” liquidity. This is also supported by the fact that the market share of electronic brokers has continued to rise since 1998 and now enjoys (according to practitioners) a market share of roughly 85% of all interdealer trading. What can we learn about FX trading from these four dealers? They are not dealers in one of the large US banks. However, the bank in question has a long history of FX trading and has been among the top 15 banks in DEM/USD over a long period. In NOK/DEM they are probably the largest bank. The introduction of electronic brokers has also made tight spreads available to more than just the key dealers in the largest banks, thus making the terms among dealers in the market more equal. Furthermore, their trading strategy seems quite successful. The fact that we document differences in trading strategy, roughly between the older market makers and the young electronic broker dealers, also means that we cover different aspects of FX trading even if the dealers are from the same bank. Still, there is a great demand for more knowledge about the microstructure of the FX market due to the lack of dealer-specific trading data and inventories. This is especially true for the new trading environment resulting from the introduction of electronic broker systems. In this respect, this study fills a gap in the literature.