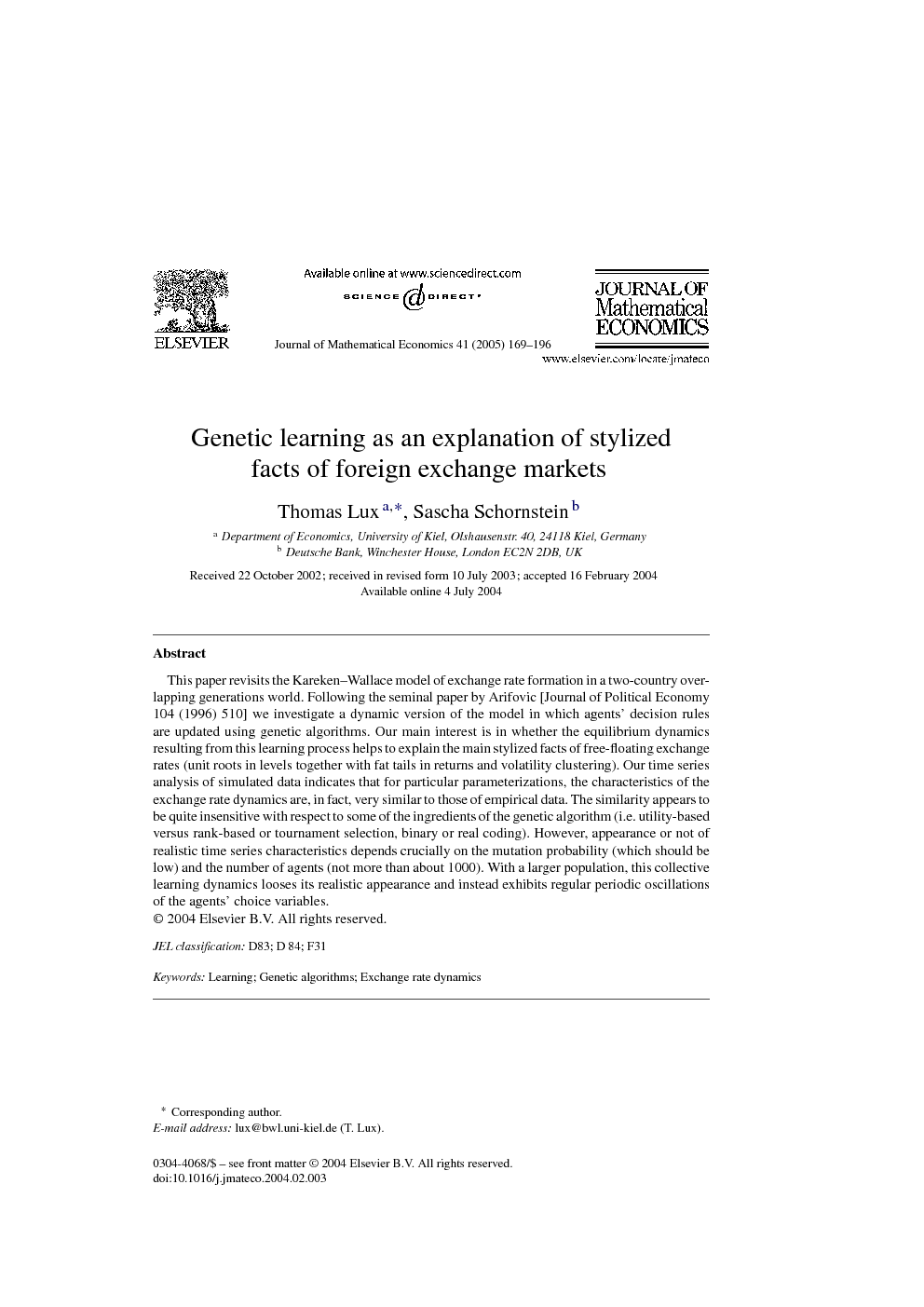 This paper revisits the Kareken–Wallace model of exchange rate formation in a two-country overlapping generations world. Following the seminal paper by Arifovic [Journal of Political Economy 104 (1996) 510] we investigate a dynamic version of the model in which agents’ decision rules are updated using genetic algorithms. Our main interest is in whether the equilibrium dynamics resulting from this learning process helps to explain the main stylized facts of free-floating exchange rates (unit roots in levels together with fat tails in returns and volatility clustering). Our time series analysis of simulated data indicates that for particular parameterizations, the characteristics of the exchange rate dynamics are, in fact, very similar to those of empirical data. The similarity appears to be quite insensitive with respect to some of the ingredients of the genetic algorithm (i.e. utility-based versus rank-based or tournament selection, binary or real coding). However, appearance or not of realistic time series characteristics depends crucially on the mutation probability (which should be low) and the number of agents (not more than about 1000). With a larger population, this collective learning dynamics looses its realistic appearance and instead exhibits regular periodic oscillations of the agents’ choice variables.

Elaborating on the GA version of the Kareken–Wallace model introduced by Arifovic (1996) and Arifovic and Gencay (2000), we have analyzed both the potential and the limitations for this type of artificial open economy to generate realistic time series properties. As it turns out, the model can generate time series which very closely mimic the statistical characteristics of empirical data. The mechanism responsible for the emergence of these interesting dynamics seems to be similar to the one analyzed within a different context by Lux and Marchesi (1999): the model has a continuum of equilibria with an indeterminate distribution of strategies among agents (as has been argued above, any distribution of the fi would be admissible in equilibrium). With the stochasticity of the genetic process, there will always be distortions preventing the system from settling at any particular equilibrium. Because of the evolutionary instability of any distribution of strategies these random distortions will evoke self-amplifying tendencies which produce large price changes (fat tails) and volatility clustering. However, we also find that a small probability of mutation and a small number of agents are needed to get this realistic output for the exchange rate. 9 With a large population, the destabilizing tendencies are so strong that the crucial choice variable, fi, bounces back and forth between the corners of the admissible parameter space. This applies to both binary and real-coded GAs. While the requirement of small mutation rates might be considered to be plausible and not too restrictive, having to restrict the population size to numbers below, say, N = 1000 is much more cumbersome. Real markets (in particular, the world-wide market for foreign exchange), surely have more participants so that N < 1000 seems an unrealistic requirement. However, this disappointing finding is shared by other multi-agent models (cf. Egenter et al., 1999, Yeh, 2001 and Challet and Marsili, 2002). Essentially, with high N, a law of large numbers becomes effective even in models with a large number of available strategies and the randomness from the interaction between the microscopic choices of strategies vanishes. While in certain models, prices converge to fundamental values in the large economy limit ( Egenter et al., 1999), the absence of fundamentals in the Kareken–Wallace model appears to be responsible for the oscillations between extreme choices. How could one overcome these uncomfortable findings and save the ‘nice’ results obtained with smaller populations? One possibility would be to allow for more coherence among individuals via social sharing of information. Allowing for groups of agents to form, we would get a smaller effective number of agents. As an alternative, endogenous development of wealth could lead to some agents exerting more influence on the market outcome than others (of course, this feature would be particularly difficult to incorporate into the present simple model). This would presumable also change the outcome in a way that differs from the atomistic case analyzed above. 10 Exploring these avenues is left for future research.