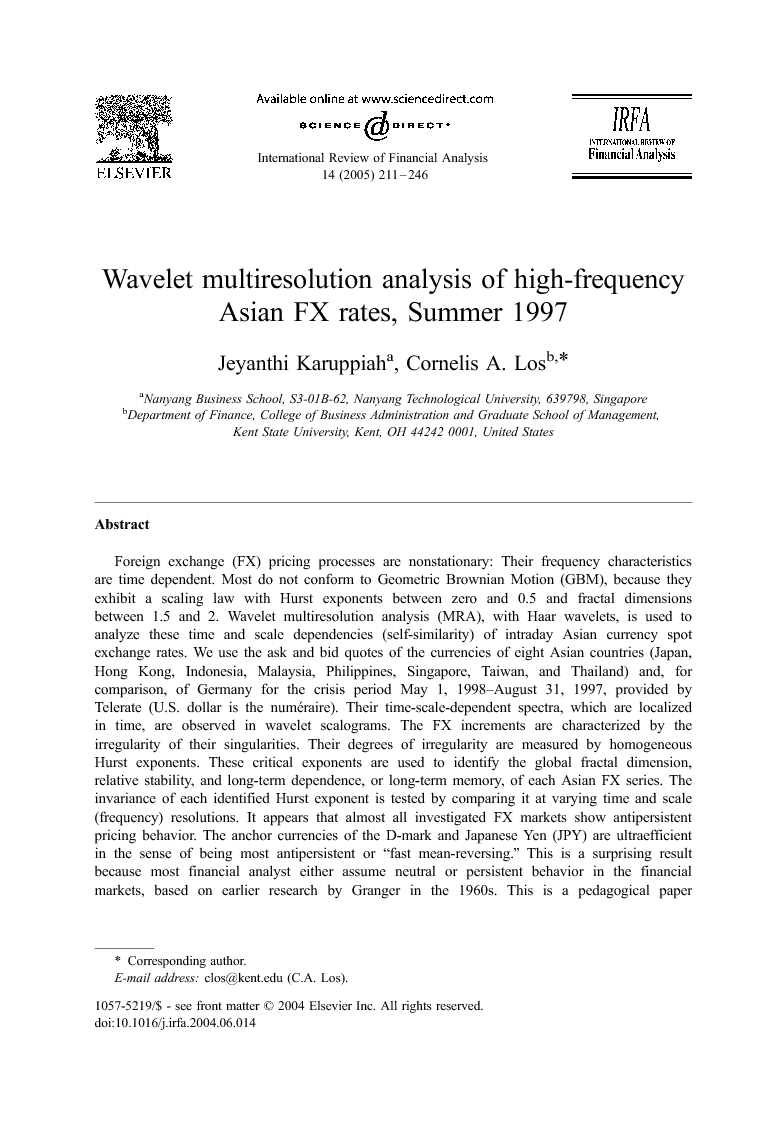 Foreign exchange (FX) pricing processes are nonstationary: Their frequency characteristics are time dependent. Most do not conform to Geometric Brownian Motion (GBM), because they exhibit a scaling law with Hurst exponents between zero and 0.5 and fractal dimensions between 1.5 and 2. Wavelet multiresolution analysis (MRA), with Haar wavelets, is used to analyze these time and scale dependencies (self-similarity) of intraday Asian currency spot exchange rates. We use the ask and bid quotes of the currencies of eight Asian countries (Japan, Hong Kong, Indonesia, Malaysia, Philippines, Singapore, Taiwan, and Thailand) and, for comparison, of Germany for the crisis period May 1, 1998–August 31, 1997, provided by Telerate (U.S. dollar is the numéraire). Their time-scale-dependent spectra, which are localized in time, are observed in wavelet scalograms. The FX increments are characterized by the irregularity of their singularities. Their degrees of irregularity are measured by homogeneous Hurst exponents. These critical exponents are used to identify the global fractal dimension, relative stability, and long-term dependence, or long-term memory, of each Asian FX series. The invariance of each identified Hurst exponent is tested by comparing it at varying time and scale (frequency) resolutions. It appears that almost all investigated FX markets show antipersistent pricing behavior. The anchor currencies of the D-mark and Japanese Yen (JPY) are ultraefficient in the sense of being most antipersistent or “fast mean-reversing.” This is a surprising result because most financial analyst either assume neutral or persistent behavior in the financial markets, based on earlier research by Granger in the 1960s. This is a pedagogical paper explaining the most rational methodology for the identification of long-term memory in financial time series.

There is still a remarkable lack of scientific analysis of the crucial financial market phenomena that characterized the Asian Financial Crisis from a risk management perspective. The phenomena of financial crisis, turbulence, friction, and persistence are clearly inadequately described by the affine Markow (ARIMA) and Geometric Brownian Motion (GBM) models (Bouchaud & Potters, 2000). The main objective of this paper is to present more representative models and analytic procedures, adapted from hydrology, biometrics, and signal processing, to empirically identify foreign exchange (FX) rate models. The measurement of the empirical efficiency of FX markets for risk management purposes dates back to the early 1970s, when the 1944 Breton Woods Agreement of fixed exchange rates was discarded in 1971 and replaced by the current system of flexible exchange rates in 1973 (Cornell & Dietrich, 1978, Friedman & Vandersteel, 1982 and McFarland et al., 1982). But the then existing research methodology was inadequate to identify the model of the data. Recently, more discerning signal processing techniques to the same model identification problem have been proposed and appear to have more success (Bollerslev & Domowitz, 1993, Corazza & Malliaris, 2002, Gençay et al., 2001a, Gençay et al., 2001b, Van De Gucht et al., 1996, Los, 2000b and Los, 2003). In an efficient market, the arrival of new information produces instantaneous price correction, leaving no prospect for price prediction and therefore minimal opportunity for reaping abnormal profits. The efficient market hypothesis (EMH) states that a market where the best prediction of a price τ periods into the future (=the prediction horizon), based on current and past information, Et{x(t+τ)}, is its current, exact, and known price, xˆ(t)=x(t), is martingale efficient ( Fama, 1970 and Fama, 1991): 1 equation(1) View the MathML sourceEt{x(t+τ)}=xˆ(t)for anyτ>0 Turn MathJax on This implies that the martingale increments equation(2) View the MathML sourcex˜−τ(t)=x(t+τ)−xˆ(t) Turn MathJax on have zero mean (per definition): equation(3) View the MathML sourceEt{x˜−τ(t)}=0for anyτ>0 Turn MathJax on and that these increments are independent from each other. They may also be identically distributed=stationary, up to a Fickian Hurst exponent, or time-scaling parameter, of 0.5, so that their volatility equals that of the Geometric Brownian Motion (GBM): equation(4) View the MathML sourceσx˜−τ=στH=στ0.5 Turn MathJax on Earlier, we investigated the martingale efficiency of seven Asian FX markets by using nonparametric tests of the historical increments of high-frequency, minute-by-minute data (Bollerslev & Wright, 2000, Los, 1999 and Los, 2000a):2 equation(5) View the MathML sourcex˜τ(t)=x(t)−xˆ(t−τ)=x(t)−xˆτ(t) Turn MathJax on From that research, we concluded that: (1) All nine investigated currencies [Hong Kong dollar (HKD), Indonesian rupiah (IDR), Japanese Yen (JPY), Malaysian ringgit (MYR), Philippines peso (PHP), Singapore dollar (SGD), Thai baht (THB), Taiwan dollar (TWD), and the benchmark currency of the Deutschemark] exhibit wide-sense stationarity in their increments, before the currency turmoil started on July 2, 1997, the day after Hong Kong was handed over to the People's Republic of China. When all 1997 FX increments are tested together, only five (HKD, JPY, PHP, TWD, and Deutschemark) show wide-sense stationarity. This suggests that FX models must allow for both stationarity and nonstationarity. In particular, they must allow for sharp discontinuities. (2) All nine currencies exhibit significant time dependencies of various lengths τ in their increments, in both the whole 1997 data set and in each of the half year data sets, from before and after the midyear currency break. This suggests that FX models must allow for both serial and long-term time dependence. (3) Significant trading windows of up to 20 min are identifiable in the FX increments throughout 1997, and more complex persistence behavior than the affine Markov (ARIMA) processes are identifiable. This suggests that FX models must allow for nonlinearity.3 This paper examines long-term dependence (long memory) observed in FX markets, that is not identifiable by serial, linear dependent (correlation) models of the affine Markov type. Analysts, who use serial correlation models, often observe that serial FX price residuals are uncorrelated (=linearly independent) and then, erroneously, conclude that these markets are efficient because they ignore the more difficult to detect nonlinear long-term dependence. Already in the mid-1960s, Mandelbrot observed that market pricing processes are nonstationary and possibly nonlinear, and that martingale models are inadequate to describe them (Mandelbrot, 1966, Mandelbrot, 1971 and Mandelbrot, 2002). His warnings were ignored: In the early 1970s, the affine GBM models became popular because of the usefulness of the Black–Scholes risk-neutral valuation method, in particular, for the valuation of derivatives. Now, recently, considerable evidence has been accumulated that empirical market pricing processes do not conform to such affine GBMs because they exhibit empirical scaling laws with scale exponents that do not conform to the Fickian Hurst exponent of H=0.5 of the GBM. Fortunately, the valuation of derivatives can be performed with non-Fickian exponents, H≠0.5 Several authors have found that stock market price increments, or rates of return, exhibit empirical Hurst exponents in the range of H≈0.6–0.7 (Cf. Peters, 1994, for an extensive bibliography). Thus, stock market rates of return on such risky assets are now known to be persistent. In contrast, this paper finds that most FX rates exhibit empirical Hurst exponents in the range of 0.3–0.5. In particular, the anchor currencies of the Deutschemark (now replaced by the Euro) and the JPY exhibit Hurst exponents of about H≈0.2–0.3. In other words, most FX rates are found to be antipersistent. From what we have been able to determine from the financial literature, ours are the first empirical measurements of antipersistent Hurst exponents of FX rates (Elliott & van der Hoek, 2003).4